Menu
You are here: Home / News / Uncategorized / A Trader’s Story on the Challenges of Seeking Eye-Care

Mr Shaik Ahmed, an informal trader from the Brook Street Market, also fondly known as ‘Strongman’ by the trading community – proudly boasts 80 years of healthy life, except for the more recent problems with his sight. This was becoming a challenge because he is dependent on his eye-sight not only because he lives alone, but also because his primary livelihood is in informal trading. 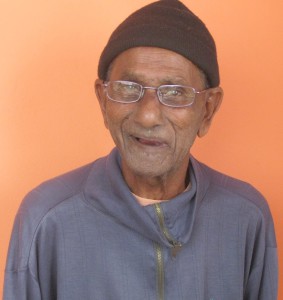 Mr Ahmed reported that on his prior visits to a local public hospital,  he was subject to waiting long hours in lines at the expense of losing potential income in his business, only to receive the same standard procedure as everyone else without ever being attended to by an Optometrist or Eye Specialist. He mentioned that the procedure left him feeling worse and disorientated, such that he had given up seeking medical assistance – until AeT reignited his desire to recover his sight.

Mr Ahmed went for the second round of eye-tests hosted by AeT and carried out by International Centre for Eye Care Education (ICEE) at Seda eThekwini. See the eye-care drive for informal workers as part of the ‘67-minutes of service’ by AeT for Mandela Day which began in 2010.

He was referred to and visited several hospitals including St Aidans, Mahatma Gandhi and Addington with determined assistance from AeT’s administrator and Patric Ndlovu. However, each time he was untreated on the grounds of not being a resident of the hospital’s vicinity or unable to receive appropriate care to determine the diagnosis of his sight problem. However, eventually through the assistance of Mr Hoosen Moolla, an appointment with his personal Eye Specialist, Dr Moolla from Durban Medical Centre, and subsequently with Mayat and Mayat Optometrists, was arranged.

His diagnosis revealed that he is suffering with glaucoma in his left eye which is now permanently blinded. Glaucoma is said to be an eye disorder in which the optic nerve suffers damage, permanently reducing vision in the affected eye(s) and progressing to complete blindness if untreated. However he was issued with prescription bi-focal glasses that enable him to read and perform normal tasks with greater clarity using his functioning right eye. These were all done free of charge for which Mr Ahmed expressed immense gratitude. 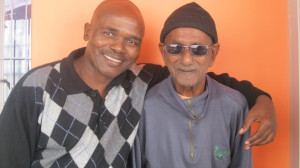 For AeT, what inspired this drive for eye-care is the fact that informal workers often lack both time and money to care for their vision, let alone their health. However, this case highlights some of the barriers and challenges to getting appropriate assistance as faced by people from lower-income groups, particularly informal workers. Mr Ahmed mentioned that he keeps AeT, Mr Hoosen Moolla, Dr Moolla of Durban Medical Centre and Mayat and Mayat Optometrists in his prayers because he is now able to see and read the Quran with better clarity. What’s more, he remains hopeful for a miracle that the blindness in his left eye will be cured.