Menu
You are here: Home / News / Advocacy / A Tribute to John Makwicana

Influential street trader John Makwicana passed away from a lingering illness on March 7, 2018, at the age of 71. John was an inspiring figure amongst Durban’s inner-city community of informal workers, where he worked as an informal trader for 21 years. He served as the chairperson of Traders Against Crime (TAC) and as the deputy president of Masibambisane Traders Association (MATO), protecting and advocating for informal workers’ rights. John gained a huge victory for informal workers when he won a landmark case against the Durban municipality following the impoundment of his goods by the Metro Police in 2013. His case set a legal precedent challenging the constitutionality of the impoundment of traders’ goods, and gained recognition and validity of informal work globally. 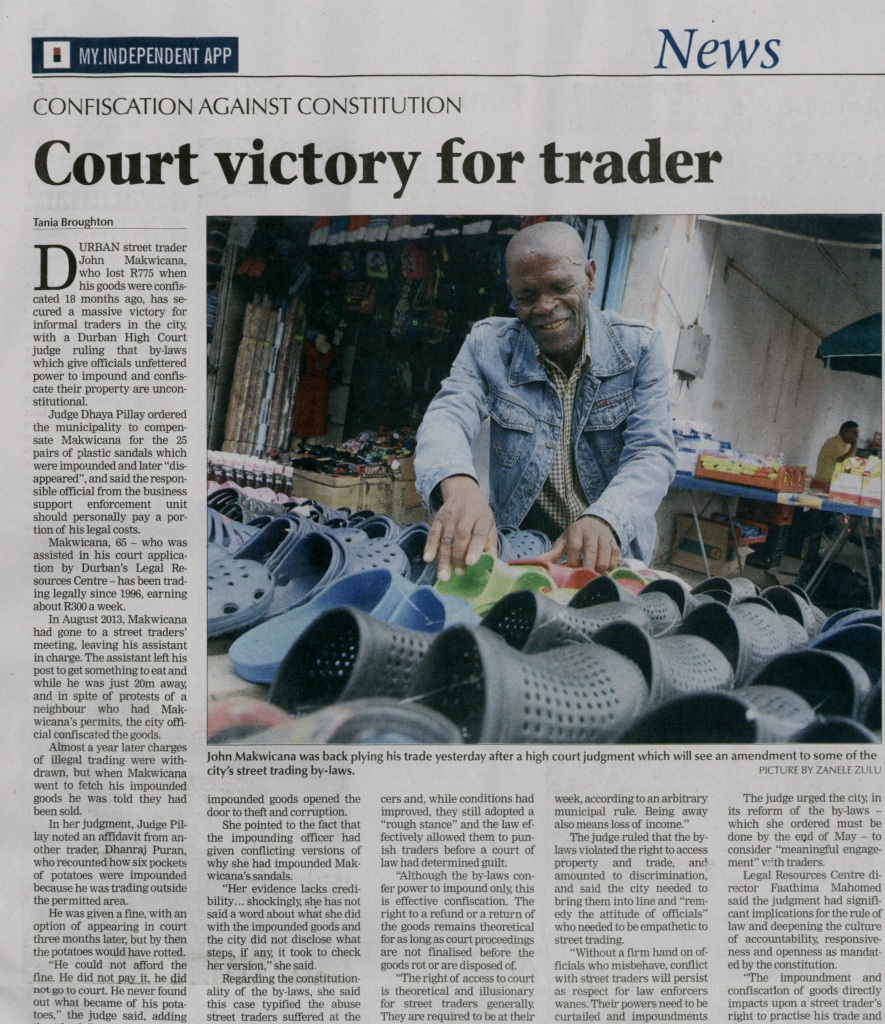 The Mercury newspaper article on John’s case written by Tania Broughton on 18 February 2015.

When John came to Durban in the early 1990s, he started selling carrier bags on a street corner across from Thokozani Lukhozi, another trader. When Thokozani’s neighbour left his site, it was allocated to John, who ended up having a profound impact on the area. The workers had been trading illegally and were regularly harassed by City officials, but John had the courage to confront and question them. He would demand that traders’ impounded goods be released and go to City meetings to request his trade be legalized. Thokozani says he instilled a sense of activism in his neighbours; now they are not afraid to confront the police and question the laws. Because of his activism, his fellow traders chose him as their leader. 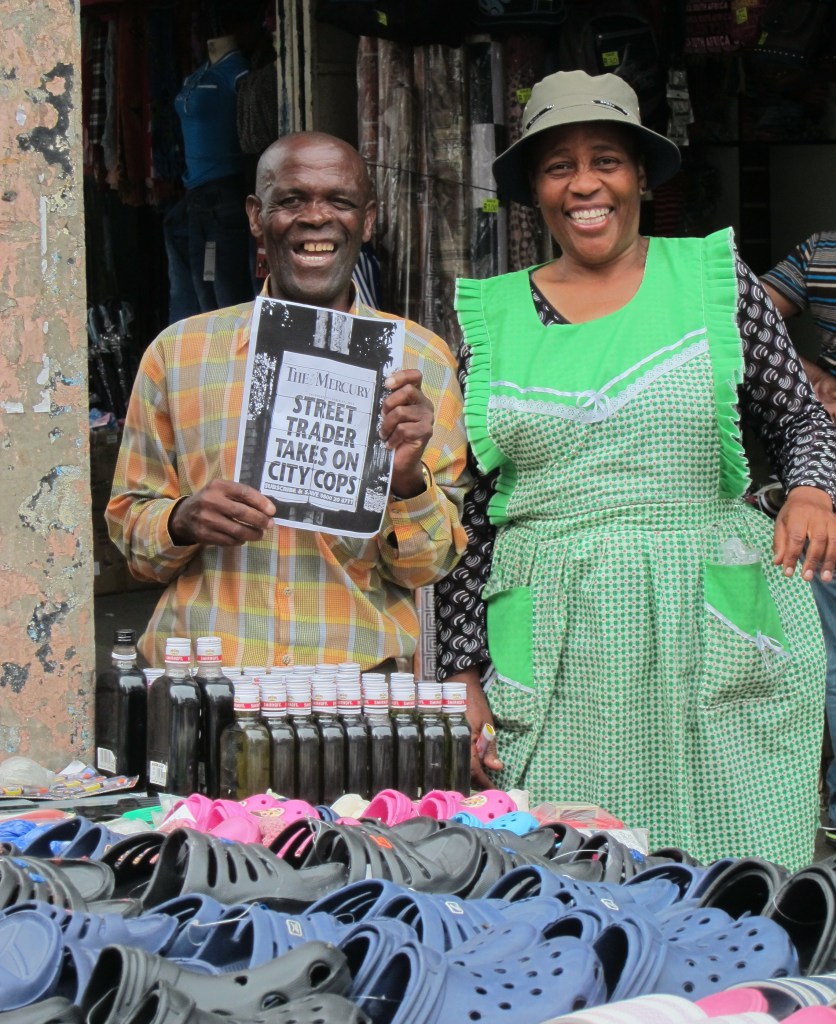 As a leader in various trader organizations, John was at a traders meeting when a Metro Police officer confiscated 25 pairs of his sandals and issued him a fine of R300. In response, John took the City to court and won the case. Judge Dhaya Pillay ordered compensation for the goods and declared two specific informal trader bylaws  to be unconstitutional. These bylaws had authorized confiscations. She wrote in the judgment:

“Without a firm hand on officials who misbehave, conflict with street traders will persist as respect for law enforcers wanes.”

Traders say police harassment has eased since the case. One trader who shared this is Dhanraj Puran, who worked on the same street as John. Puran grew up at the markets, trading with his father as a child and then on his own as an adult. He had encounters with the police before; on one occasion, the lines marking the area he traded from were faded and the police decided he had exceeded the boundary of his site. He was fined and his goods were taken, but John fought for him and other traders so they wouldn’t have to pay the fines. 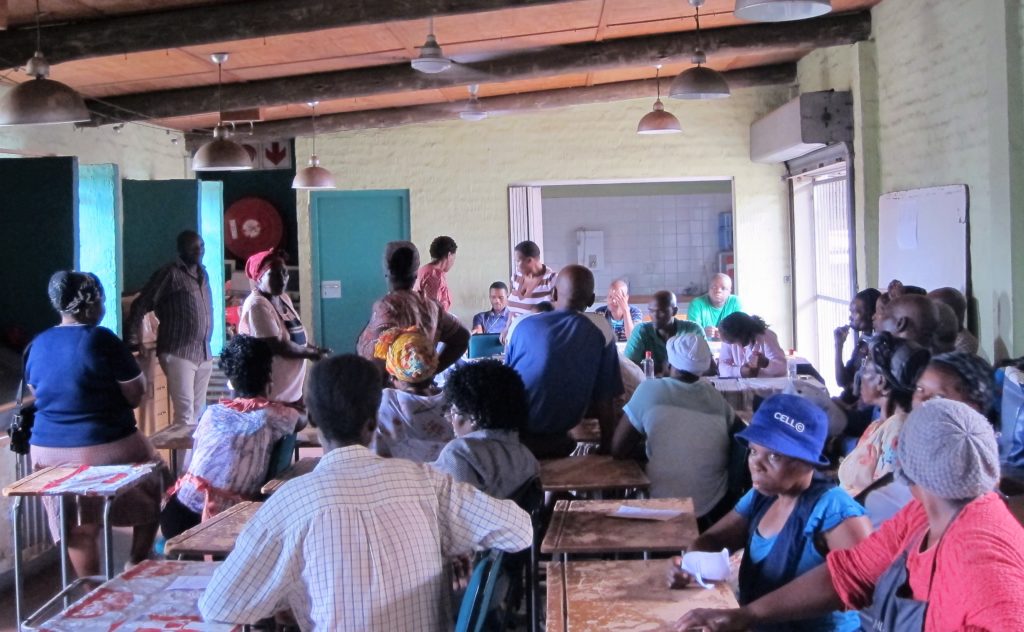 A trader-led memorial service for John was held in Warwick Junction a few days after his passing. Photo: Tasmi Quazi.

John’s impact stretches beyond Durban’s inner-city; the ruling of the case is felt globally. The current and former leaders of Women in Informal Employment: Globalizing and Organizing (WIEGO) both have glowing comments for the late trader. Martha Chen, the former International Coordinator of the organization, writes:

“John was a brave hero who stood up to injustice – and won a legal victory for himself and his fellow vendors around the world.”

She goes on to say she is dedicating a moment of silence to him in her class. Current International Coordinator of WIEGO, Sally Roever, expresses sorrow at his passing and emphasizes the importance of his work, saying:

“… the court ruling resonates with everyone because arbitrary confiscations are so incredibly common to street vendors all over the world, regardless of country or region or by-laws or anything else.”

“John of course featured in the lives of both Patrick and I since the ‘inception’ of Warwick Junction in 1995. As the infrastructure work emerged, he one day appeared at one of our meetings to announce that he was heading the Development Sub-Committee for the then Informal Traders Management Board (ITMB)! He became a regular presence at our meetings, tracking the work and on a number of occasions provided oral witness to agreements that Patrick and I had made with particular street vendors.”

John’s legacy amongst the local traders seems to be that of a hero; many of his fellow traders describe him with high praise. Fikile Nzimbomvu, a fellow Trader Against Crime (TAC) member with whom John patrolled, says:

“John was anti-crime, anti-corruption, and he was a very good man.”

Nzimbomvu echoes Puran’s thoughts, reporting the reduction in police harassment after the court case. He also shares how John’s legacy continues to impact traders even after his death; he taught them about their rights so they can now stand up for themselves. John’s neighbour Thokozani recounts how he was a kindhearted person; he would lend people money and never ask for it back, and he always had a smile. John is also described as unbiased, committed and full of respect, a man who could unify the traders. 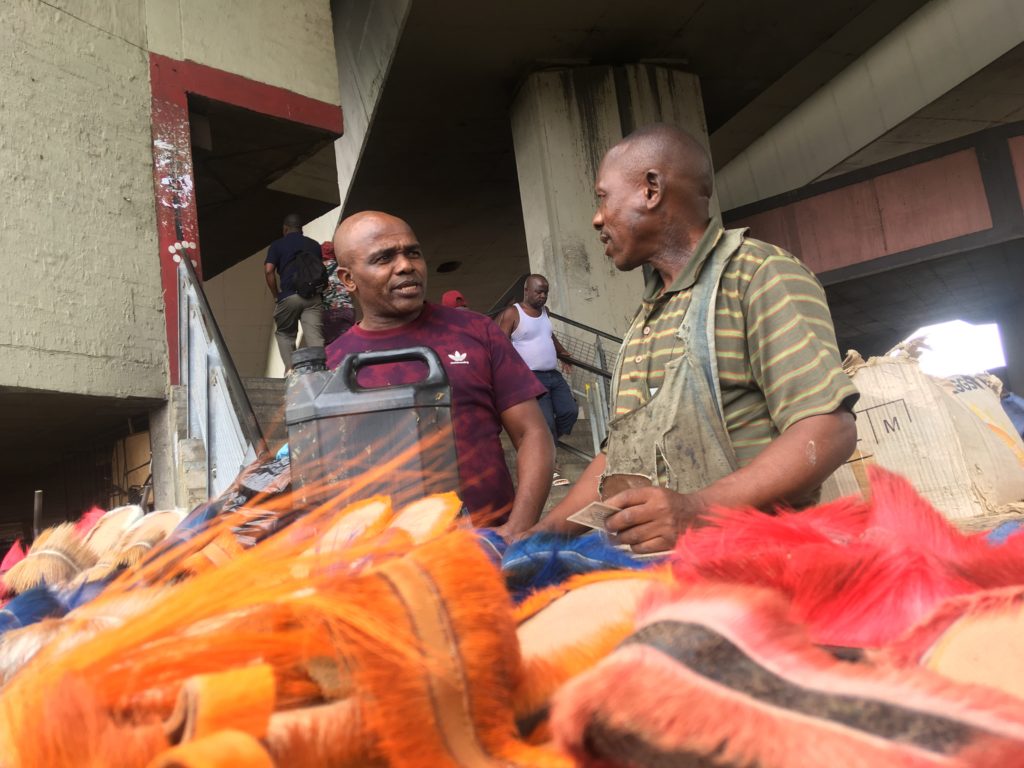 John Makwicana’s is a story of the people, an example of the powerful contributions of informal workers to our socio-economic, cultural, and political structures. John was an activist who made a profound impact on the policing structures of the City, demanding accountability and challenging the overreach of power. In the words of another trader, fellow leader and activist Kholomu Mkhize,

“People have lost a true fighter and a true leader.”

John’s actions reach across borders and barriers, and his legacy of standing up for the rights of informal workers, challenging oppressive structures, and unifying and protecting his community will have lasting impact.