Menu
You are here: Home / News / Uncategorized / An alternate and inclusive retail model for Durban Project Leader of Asiye eTafuleni (AeT), Richard Dobson, has written an opinion-editorial article which appeared in the local newspaper, the Sunday Tribune Business KZN supplement, on 8 December 2013 on page 6 under the theme “Planning”. The article was prompted by the need for more open debate about the urban regeneration proposals which include introducing additional formal retail activities, namely a shopping mall, in Warwick Junction. 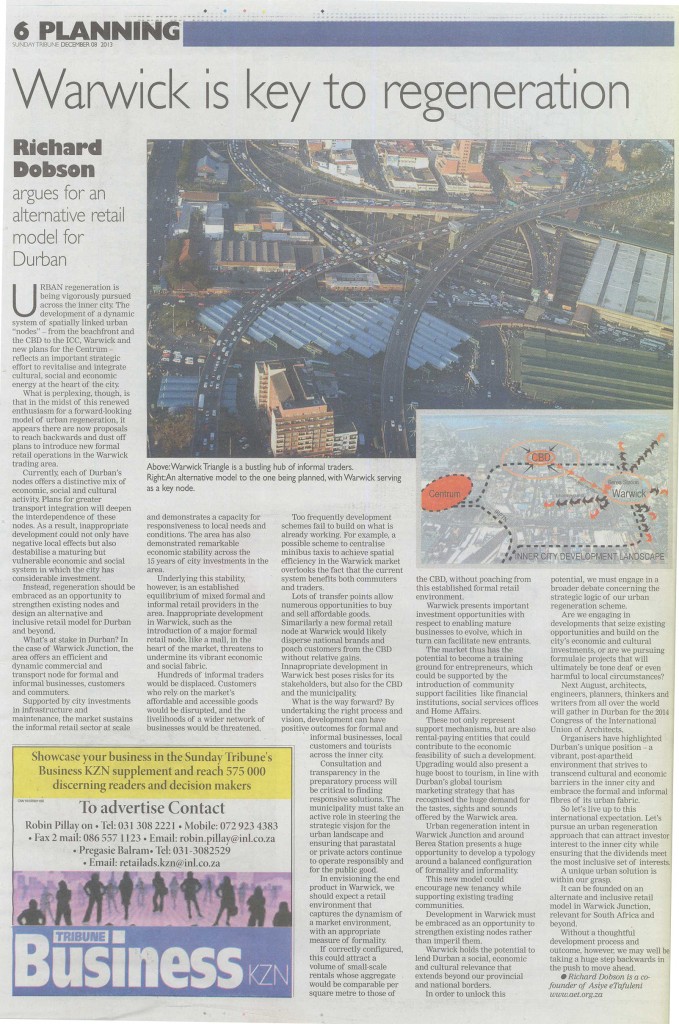 The Opinion-Editorial piece written by Richard Dobson for AeT in the Sunday Tribune (8 Dec 2013).

With AeT’s knowledge of what is emerging on the ground, the proposals to introduce additional formal retail and a centralised mini-taxi system could not only be harmful, but miss the opportunity of developing an alternate and inclusive retail model for Durban, which would have resounding impact within local, national and international contexts also looking for ways to develop the informal economy.

In order to realise a unique retail environment which integrates both formal and informal activities, it needs to be co-designed with the stakeholders. This requires a transparent process and meaningful consultation with all the interested and affected parties. In this regard, the Warwick trading community has been exposed to stakeholder processes for so long; there cannot be a better investment in social capital that could activate a co-designed process.

Therefore the renewed urban regeneration interest is an opportunity to maximise and continue the exemplary trajectory of Warwick Junction’s legacy as one of the most successful examples of infrastructure provision for informal workers at scale, which has led to the thriving informal market hub that it has become. At all accounts, the new proposals are missing the opportunity to build on Warwick Junction’s past investment in infrastructure development, community solidarity and past achievement as a node of inner-city transformation with a dynamic mix of informal and formal retail.

The photo of Warwick Junction which appeared in the Sunday Tribune described as a “bustling hub for informal traders”.

Writing this piece has made AeT reflect on the role we play as an organisation when we become aware of development proposals that are prejudicial and where the various aspects of new development processes lack transparency. What is important is that there is more open debate within the built-environment and planning fraternity about the strategic logic of the urban regeneration proposals in the Warwick Junction precinct. AeT poses: “Are we engaging in developments that build on the city’s economic and cultural investments, or are we pursuing formulaic projects that will ultimately be tone deaf, or even harmful, to local communities?”  Let’s engage.

The diagram above shows the planned introduction of the IRPTN bus transport system which will integrate existing development nodes within the inner-city. Inappropriate development in Warwick Junction could result in formal retail competition which could attract stores from the Central Business District (CBD) resulting in the shrinkage of its economic effectiveness. The counterpoint is that the introduction and the migration of additional formal retail to Warwick Junction could result in the dispersal of informal workers to other areas. Consequently, this undermines the significance of this node as a thriving informal trade hub. The net impact would be negative economic consequences to two existing nodes (Warwick and the CBD) that are already functional. Reflections of the Reformed and our Future