Bovine head meat served with steamed bread is a popular meal in Warwick. Cooking involves the cleaving of meat off the skull bones which takes about 30 minutes. The meat is then boiled in a pot for an hour. In Warwick Junction the main consumers of bovine head meat are the porters and barrow operators as they do a lot of physical work and the meal is a good source of protein. Bovine head meat is considered to be a Zulu delicacy- the cooking and consumption of which is traditionally a male only activity. Ritual slaughter plays a significant role in the socio-cultural behaviours of the Zulu culture, especially in KwaZulu-Natal. In Zulu cultural practice cattle and goats are highly revered and are regarded as a means for communicating with the ancestors.[1]

As an activity that has suffered from insufficient infrastructure in the past and is now in a period of transition to an infrastructure upgrade the bovine head cooks are a reminder of the fragility of sidewalk livelihoods.

Mrs. Mhlongo selling bovine head meat outside the Early Morning Market in early 2000s- she is the mother of Xolisile, the cook featured in the cover image. Photo: Richard Dobson.

“I sold sausages, vetkoek [a deep fried street food] and fried fish in the 80s. When the Cambridge and Jwayelani stores came into the area I couldn’t compete as they sold similar products. The business was no longer viable.”

These stores also poached their assistants that they had taught to cook, however maGagayi feels that there are more benefits to working in the informal economy. 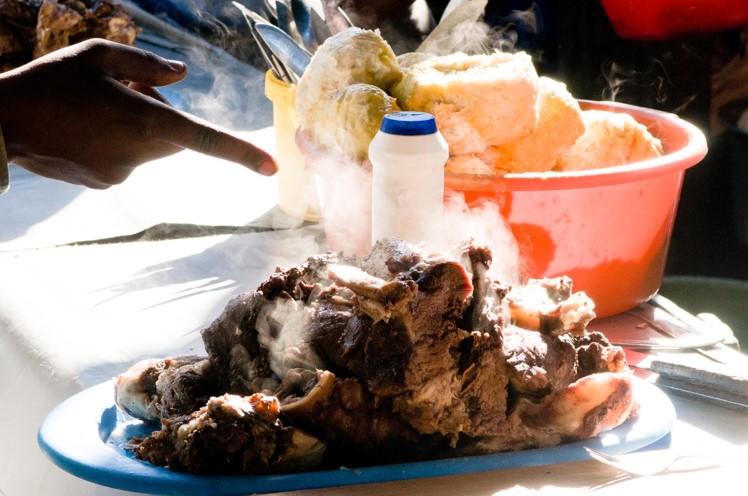 It is speculated that the practice of bovine head cooking originated in Durban via the Dalton Road hostels, which are a product of apartheid migratory labour practice. A man called Mr Dlangalala was one of the first to switch over to bovine head meat. maGagayi saw that he had customers and decided to start selling on her own. She approached Dlangalala to ask him to teach her how to cleave but he refused. Instead she went to a butchery called kwaMalume to buy a head and she taught herself.

“The first one took me the whole day to cleave but once I worked it out I made a killing!” 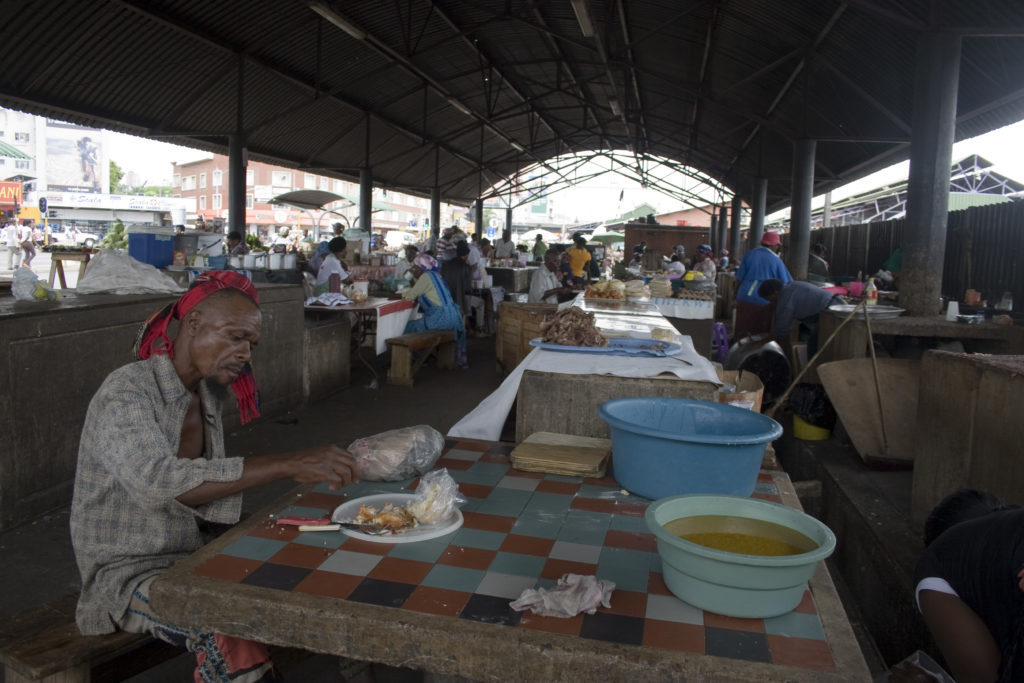 A customer eating in the first facility built for the cooks. Photo: Gerald Botha.

Why is bovine head meat associated with males?

“It’s custom, it’s a part of our Zulu custom. When there is a function or celebration women are not allowed to touch the meat, a male will cleave instead.”

How does this change in the market?

“It’s okay for me because I am doing it for commercial purposes, not for a celebration.”

The cooks originally used paraffin [kerosense] stoves however customers complained that the meat smelt like paraffin; they then used charcoal, ultimately switching to firewood as the cheapest available fuel.

When asked if there was anything else about cooking bovine head meat that she wanted to share, maGagayi provided the following lesson:

“You can tell by the teeth that this cow [the one being cleaved during the interview] is a granny cow. If the cow has missing teeth or teeth that are stained black it is old. A granny cow takes long to cook, longer than 2 hours.”

As the size of the cooking community increased so too did the number of urban management challenges. For example, the heat transfer into the Early Morning Market became an emotive issue; effluent from the cooking was causing blockages in drains and attracting rats; the sidewalks became greasy quickly; and was often congested from customers. This indicated a need for a purpose designed facility. Read more about the evolution of the infrastructure in Part 2. Informality and the Law: Narratives of informal workers in Warwick, Durban

Workplace safety with informal workers: Be safe with us

Umzanyana: a case study for technological innovation among informal workers