On 13 and 14 April 2016, a conference exclusively for women traders – believed to be the first of its kind in Durban – was held with the support of the Foundation for Human Rights and implemented by Legal Resources Centre (LRC) and Asiye eTafuleni (AeT). The conference deliberated on the significance, opportunities and challenges faced by women traders, and sought to increase awareness of laws and traders’ rights under the theme: “Towards an inclusive economy: the voice of women informal traders”. 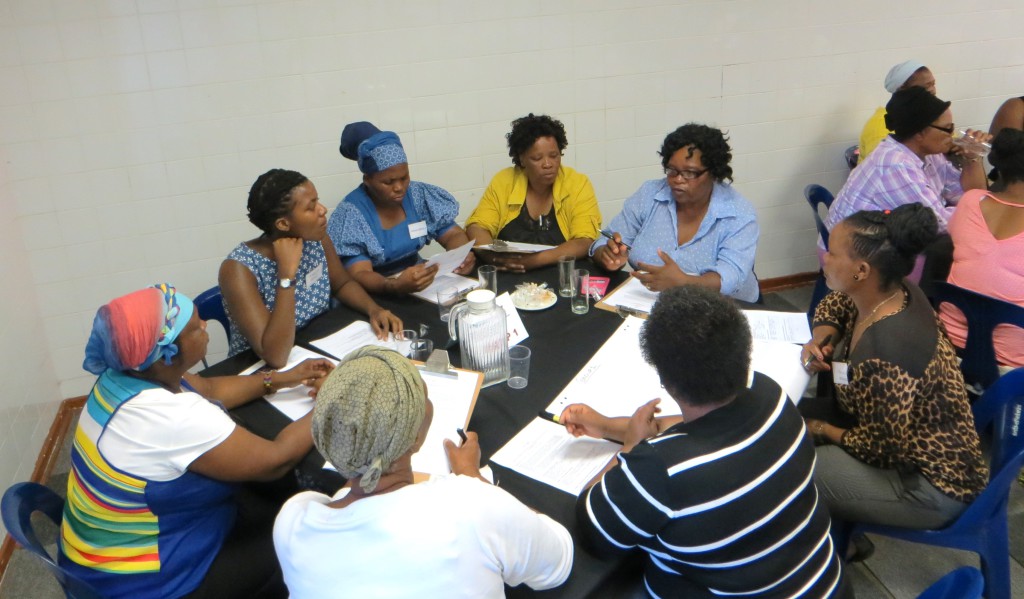 Women trader delegates at the Conference were divided into four groups and each provided with a facilitator from AeT/LRC. Photo: Richard Dobson.

The delegates comprised a diverse representation of 27 women traders from various organisations/street committees across Durban and various sectors, such as home-based work, waste picking, food and general trading.

The conference commenced with an opening address by the LRC Regional Director, Sharita Samuel, who emphasised that a focus area of the Durban LRC Office is to assist informal workers. Many of the women traders expressed gratitude that both the LRC and AeT are willing to assist informal workers with their challenges. Beyond the implementation of the conference, the LRC and AeT have a long-standing history of partnership *(see below). 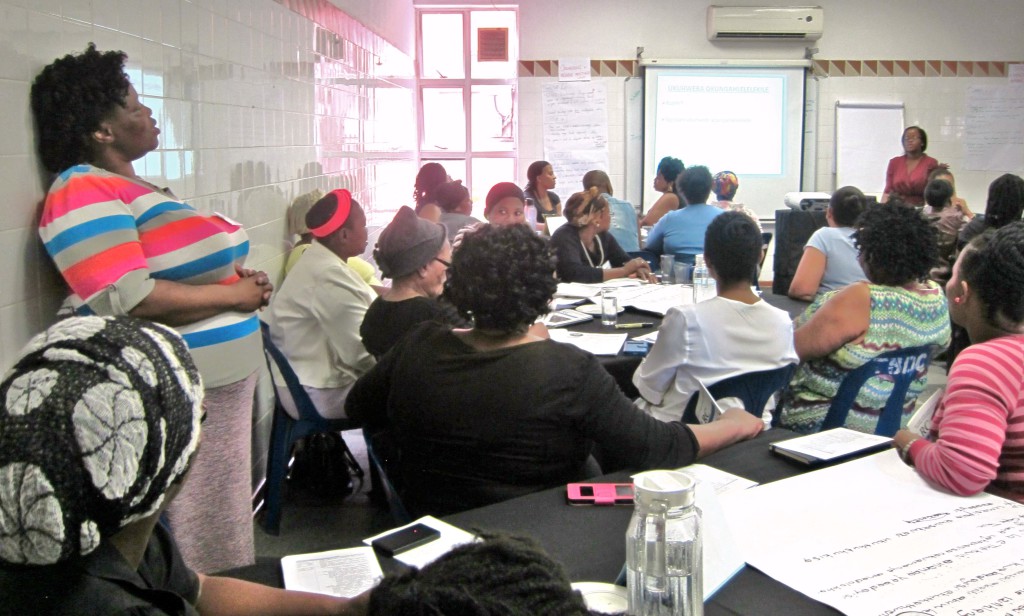 Trader delegates at the Conference eagerly participating during the interactive session of the Know-Your-Rights Booklet presentation by LRC. Photo: Tasmi Quazi.

Caroline Skinner, the Urban Policies Research Director for Women in Informal Employment: Globalizing and Organizing (WIEGO), was the key note speaker for the Conference invited for her prolific background in policy and advocacy work on the informal economy at the local, provincial, national and international level. For many years, she has also provided research material for the LRC in their litigation to secure informal workers’ rights. 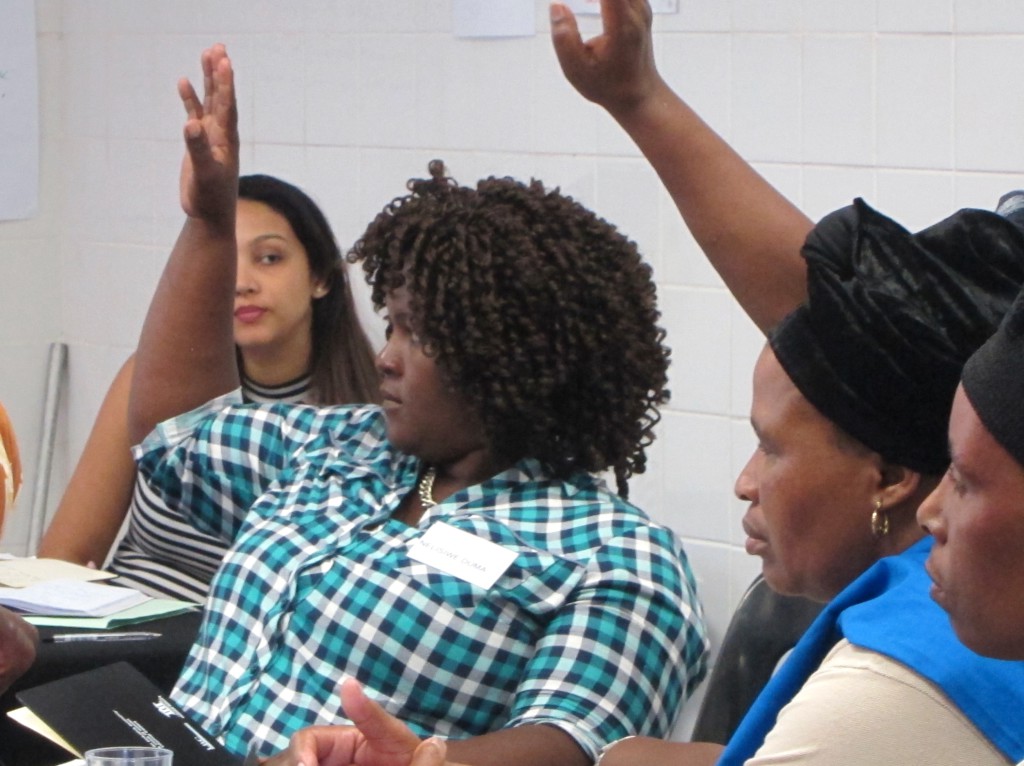 In Caroline’s presentation on the contributions of the informal economy, she cited that the total expenditure in the South African informal retail sector was R52 billion in 2004. This figure astonished many of the women traders who emphasised the need to highlight these significant contributions to South Africa’s economy to key Ministers and other decision makers across the Government structures.

Images of Self-Employed Women’s Association which inspired the Conference delegates as a model for organising and mobilising women traders. Source: here.

Organising as a development strategy was another key point of Caroline’s presentation and the case-study of India’s Self-Employed Women’s Association (SEWA) inspired the delegates in seeing the value of women-only associations and for exchange programmes with established organisations such as SEWA that could assist with capacitating the existing trader organisations in Durban. 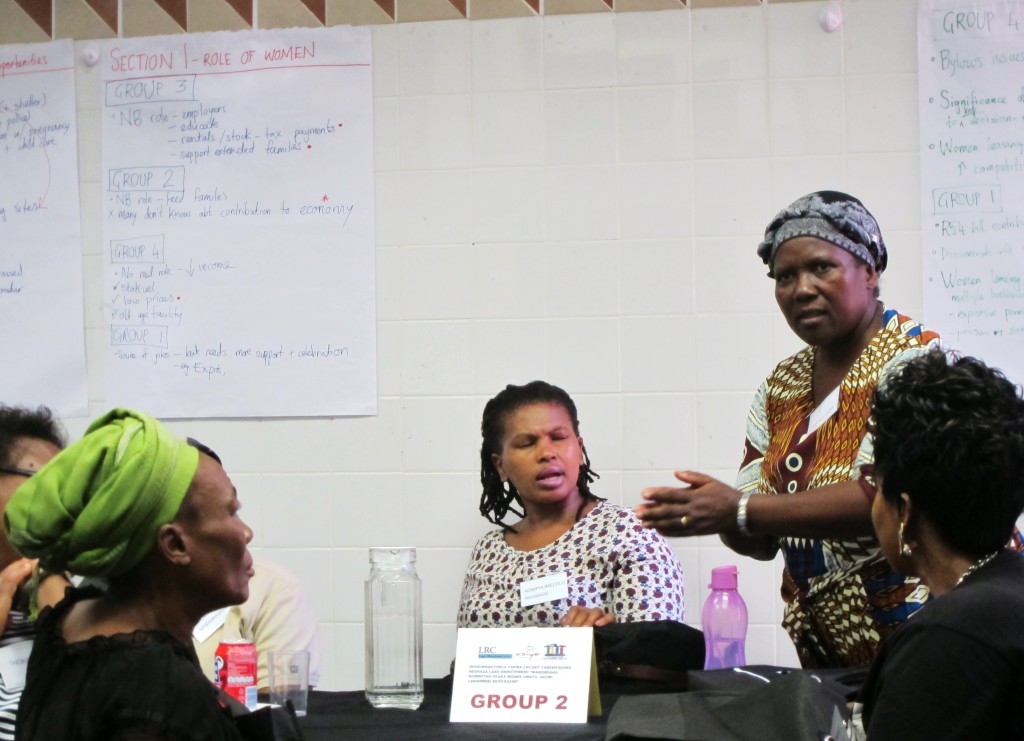 Caroline’s question to the delegates about the unusual trend in South Africa where women have been leaving the informal economy stimulated rich discussion. Their responses were linked to the reported challenges faced by women traders which they believe has pushed many women out of the informal economy. Some reasons provided were:

The LRC presented the Know-Your-Rights booklet which was well received by the women traders as a useful resource, with requests that they be made available to Police officers and disseminated to other traders in Durban through one-on-one presentations, radio and social media platforms. An emotive debate ensued at the conference when discussing the discrepancies within the regulatory environment between bylaws, policies and practice which the traders said needs to be highlighted in subsequent editions of the booklet. 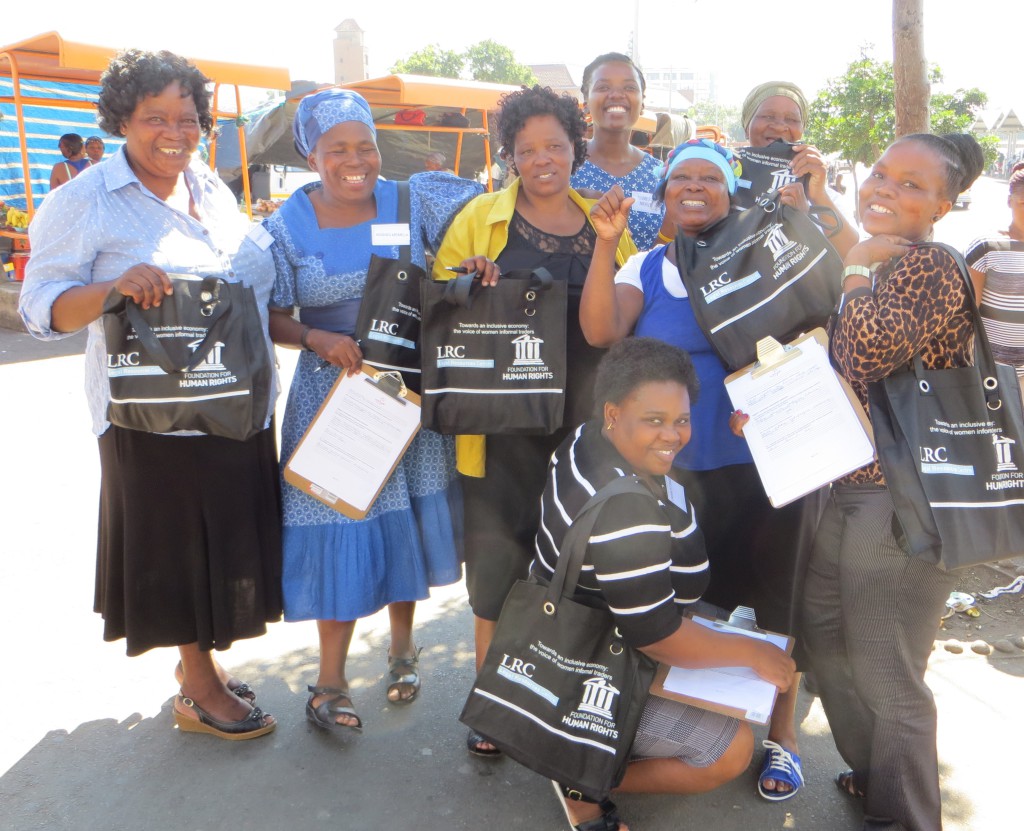 On the second day, AeT facilitated a presentation on research skills in order to prepare the delegates to conduct fieldwork. The research process was designed to enable the delegates to canvass the experiences of women traders outside of the conference based on key questions arising from the conference, as well as to present and obtain feedback on the Know-Your-Rights booklet. 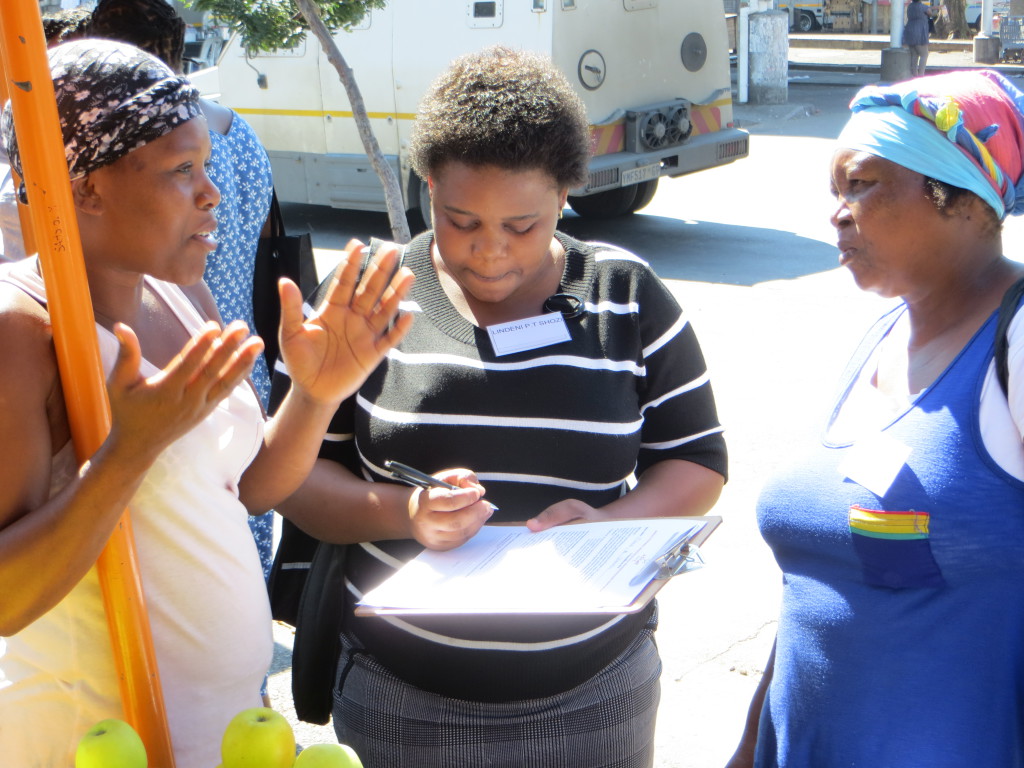 Trader delegates interviewing a woman trader in Warwick Junction during the fieldwork component of the Conference. Photo: Richard Dobson.

In total, the delegates interviewed 27 women traders from Warwick Junction and the feedback from the streets generated lively discussion and debate. Aside from a consolidated understanding of the challenges faced by women traders and their contributions at the micro-level as bread winners, a key learning was that the women traders interviewed did not recognise their wider contributions to the functioning of the economy which the delegates felt they had a better appreciation of after the conference. 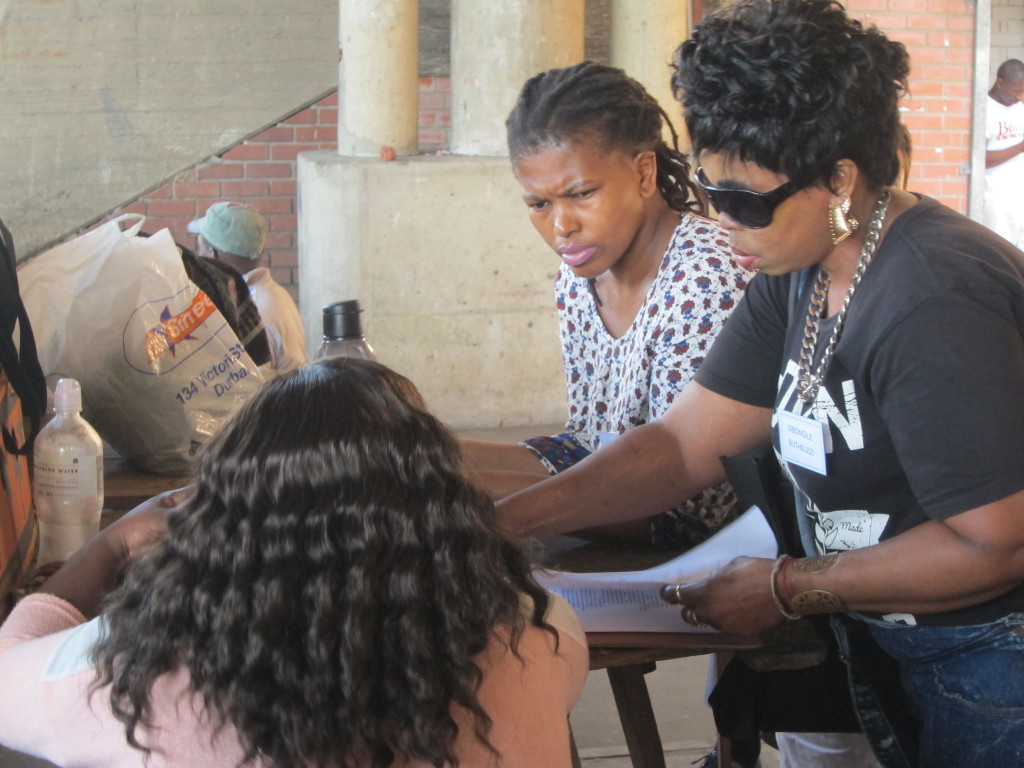 Trader delegates interviewing a woman trader based in Brook Street during the fieldwork component of the Conference. Photo: Tasmi Quazi.

For AeT, the conference was unique in that it was tailored for the majority of the isiZulu women traders, and highly interactive as a result of a number of facilitators that encouraged the participation of all the delegates. This included the fieldwork component which encouraged the delegates to apply and consolidate the knowledge gained from the conference. The methods tested to solicit the active participation of the women traders proved to be immensely successful and continues to build on our evolving intrigue with participatory techniques. 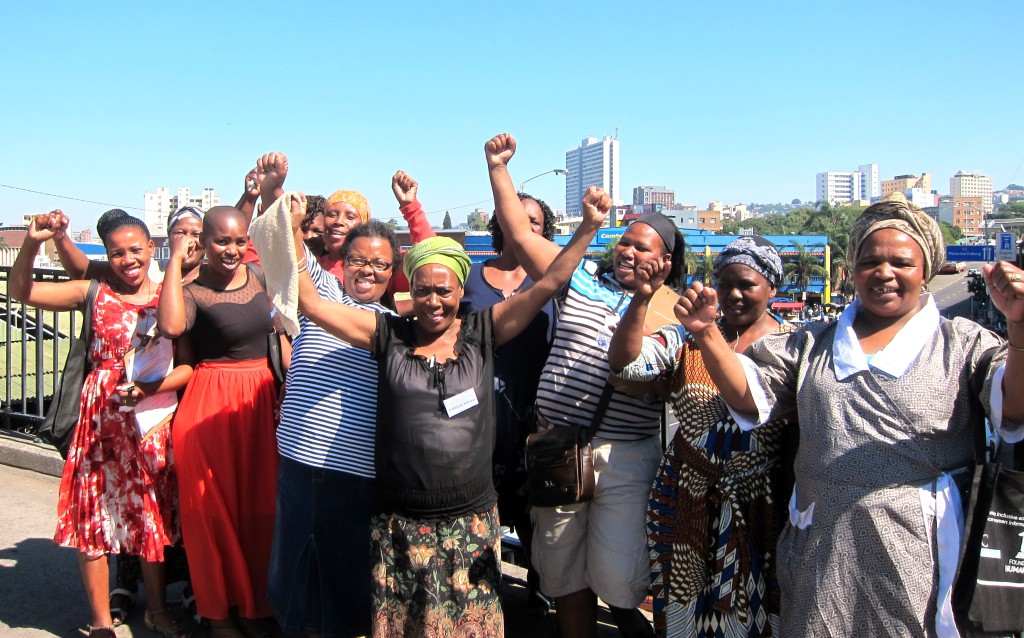 —
* The LRC and AeT have a long-standing history of organising Street Law Seminars (in partnership with the Students for Law and Social Justice) aimed at increasing legal awareness amongst informal workers as well as a shared internship programme. The two organisations have also worked together to provide legal support to various informal workers, namely, in two landmark legal cases; the Early Morning Market case which saw informal workers challenging the City’s proposed demolition of the historic market in order to build a Mall, and the John Makicwana case which challenged specific by-laws and the constitutional legality of confiscation of traders’ goods.