The Early Morning Market (EMM) has been in the Durban’s Warwick Junction precinct for 88 years and in existence for a further 24 years. That in in itself was a cause for celebration for this year’s national heritage day on 24 September. 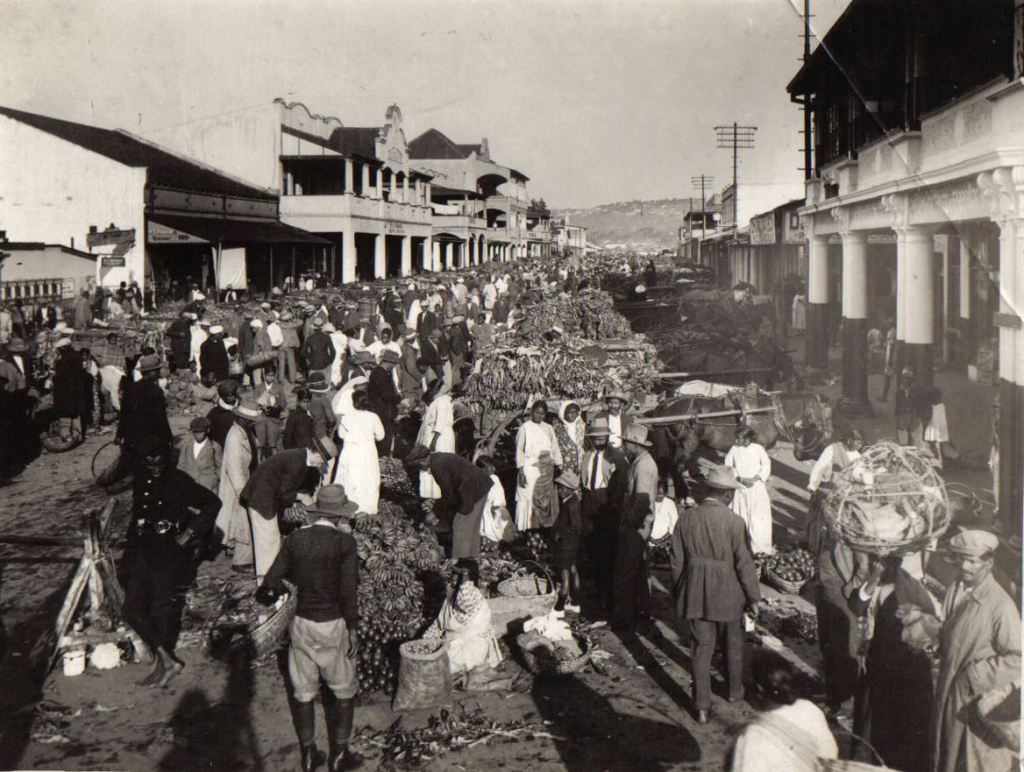 The earliest genesis of a fresh produce market in Victoria Street which was subsequently relocated, and came to be known as Early Morning Market. Photo: Dirty Linen: ‘Other Durban’.

During the Union of International Architects (UIA) Congress which was held in Durban earlier this year, an innovative exhibition called Dirty Linen: ‘Other’ Durban was curated by the Research of Curries and Surrounds (ROCS) heritage research project at Durban University of Technology (DUT). The Early Morning Market Traders Association (EMMTA) in collaboration with ROCS subsequently hosted the exhibition within an aisle in the Early Morning Market (EMM). 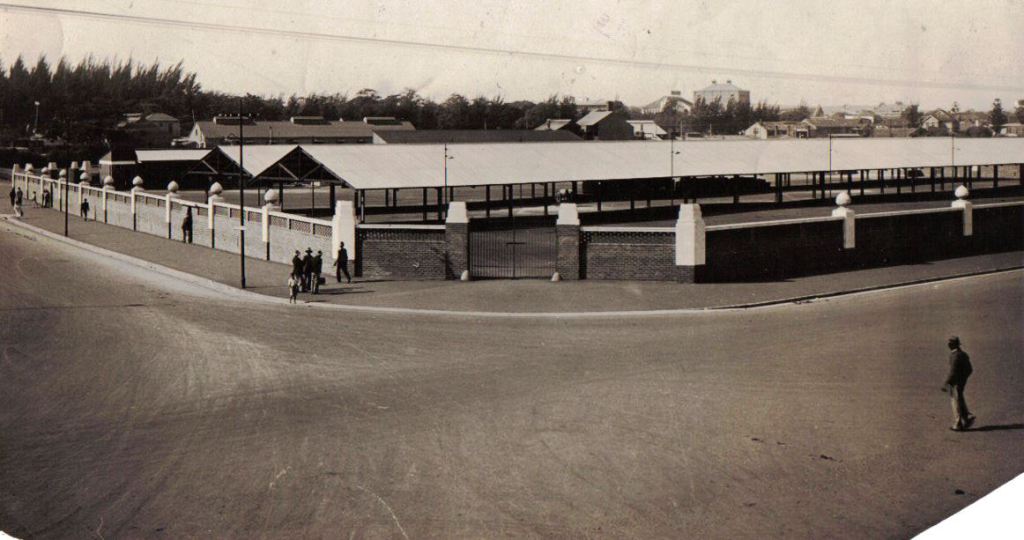 Curator of “Dirty Linen”, Leonard Rosenberg, elaborated on the exhibition and the significance of the EMM  as the chosen venue for the heritage day event:

The exhibition highlights the plight of Indians settling in the colonial town in the 1870s and the subsequent treatment of Indians and Africans, marginalised by the City, up until the late 1980s (…) The EMM was central to the lives of the people living in this ‘Other’ Durban and many will recall their bus journey to go shopping at the EMM and the ‘Top’ Market.  The older generation will recall how they travelled by spring cart to the market.

The EMM, the ‘Mother of markets’, is thus a fitting venue to tell the story of all the Markets, Beer Halls, Magazine Barracks, Baumannville, Umsinzini, Block AK, the Grey Street area (Casbah), Curries Fountain and the Dutchene or Dutchies. 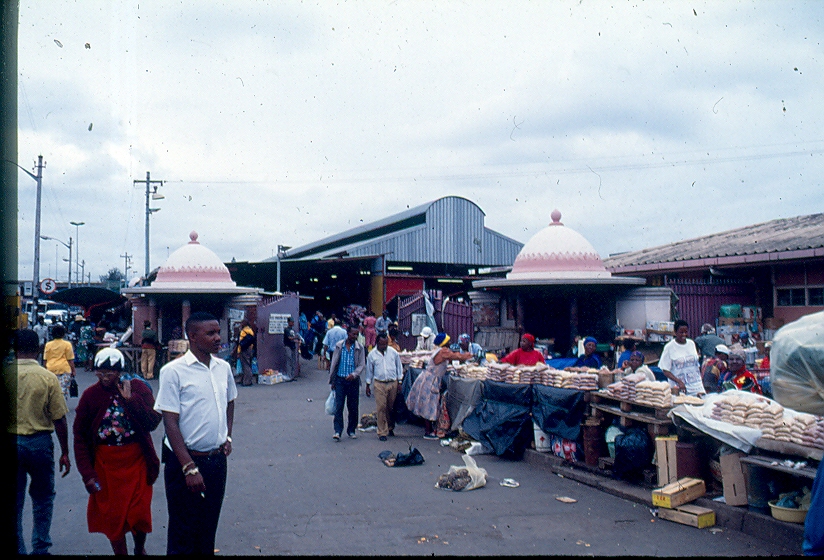 Early Morning Market in 1997 before the revamp of the roof. Photo: Richard Dobson.

Further, what inspired the choice of exhibiting in a public space like the EMM was to take the exhibition to people like informal workers whose heritage was on display, instead of expecting them to visit the exhibition halls. The heritage project was seen as a catalyst to reinvigorate the general public’s consciousness and revitalise a marginalised yet historic part of the city’s heritage. 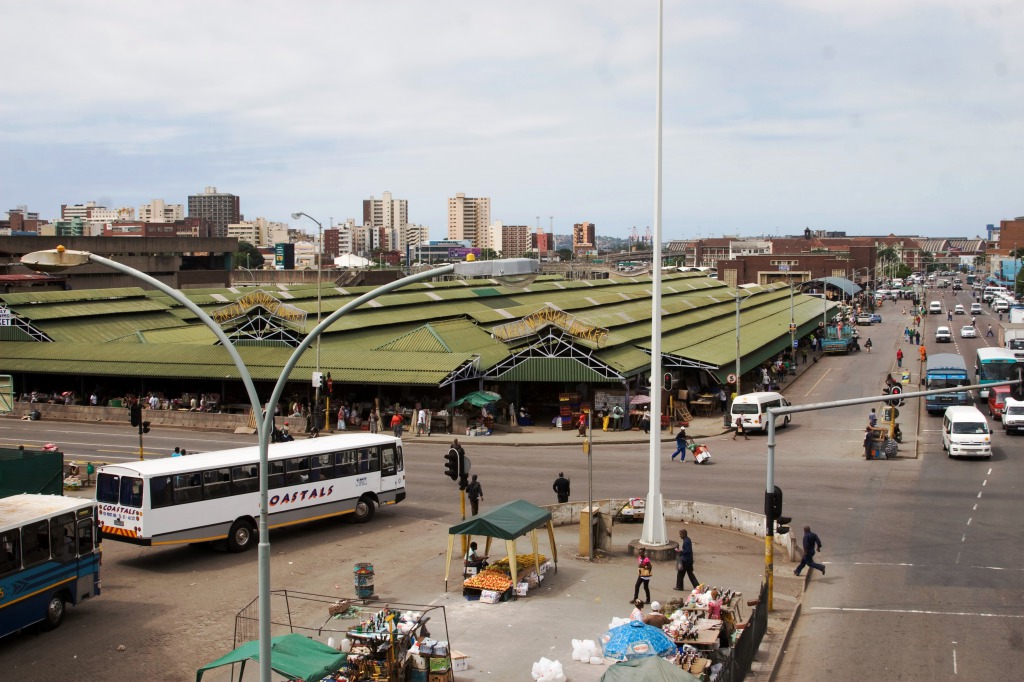 For AeT, the event also demonstrated the revitalization of an underutilised space within the EMM which also showcased AeT’s Markets of Warwick Project, images from AeT’s “Working in Warwick” Exhibition and displays from Phansi Museum to name some. Notwithstanding the fact that some of these vacant kiosks were sadly as a result of the businesses that failed during the harassment faced by the proposed demolition of the EMM by City Officials during the FIFA World Cup. 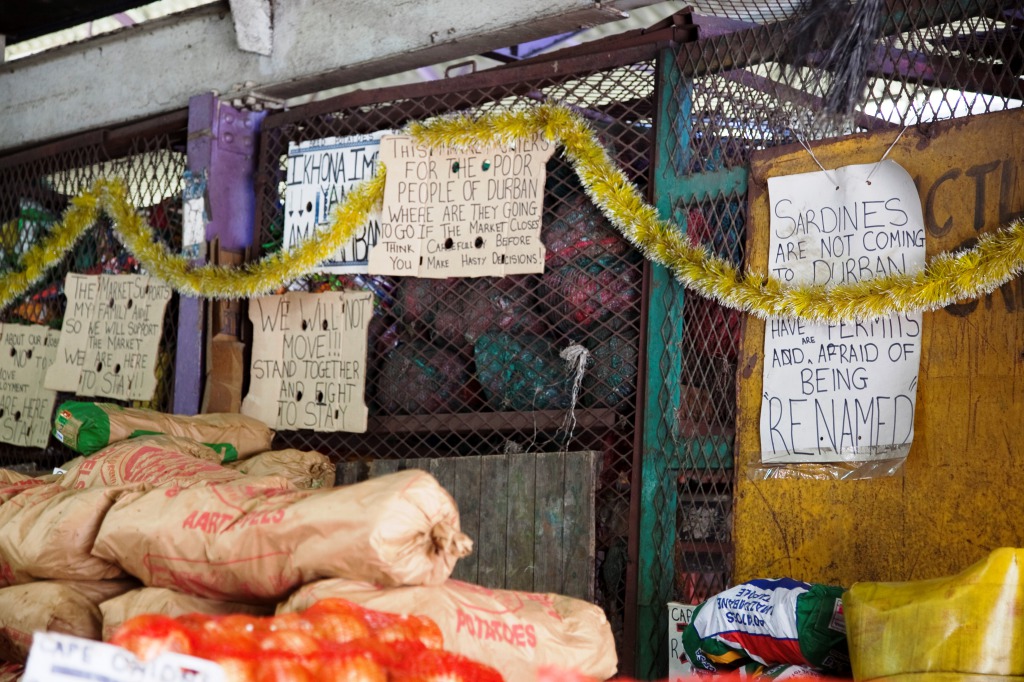 Some of the protest messages from informal traders opposing the proposed demolition of the EMM in the build up to the FIFA World Cup. Photo: Asiye eTafuleni.

The heritage day event was also an occasion to publish a souvenir leaflet illustrating and commemorating the history of the market’s past to present day. There was a diversity of people that attended the event – with a mixture of cultural events involving the informal traders, their assistants and barrow operators. Leonard Rosenberg added,

The EMM traders’ participation and the Women in Action group that organised the contemporary dance, music and dramatic performance demonstrated the multi-cultural space that the EMM occupies. It was complimented by EMM traders dressed in traditional attire. The act that brought the roof down so to speak was a dance group organised by one of the porters (barrow operators) and it was wonderful to see the interaction and response from the crowd that attended the event. 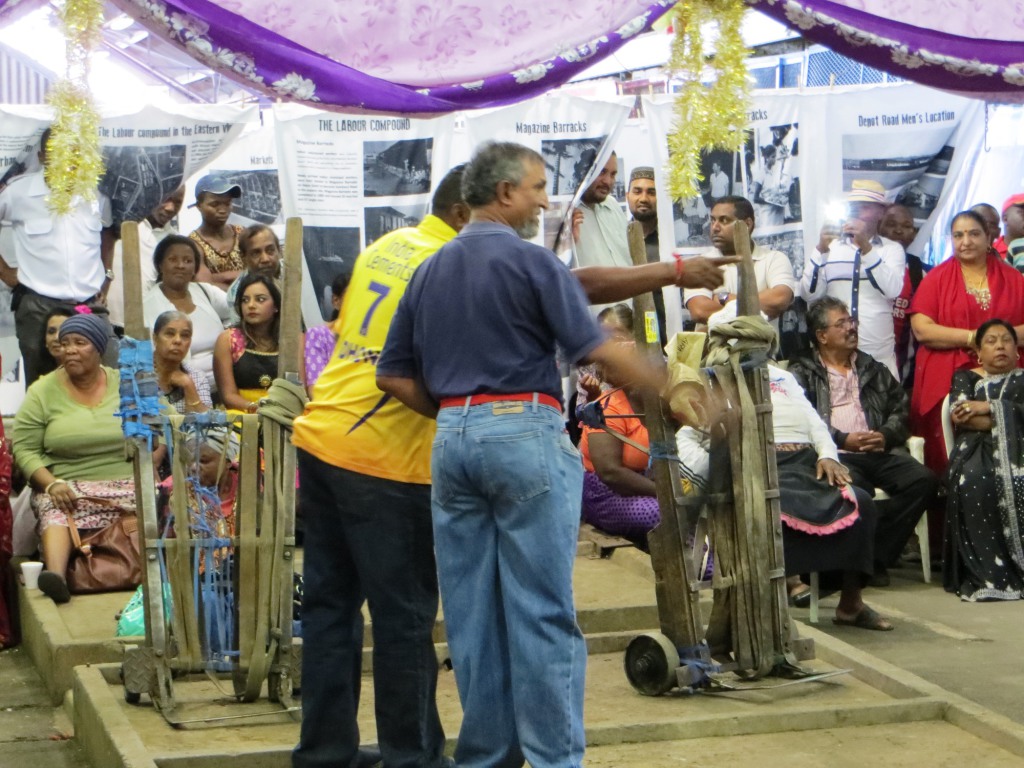 The EMM Heritage Day event on 24 September 2014, with honourary guest-speaker Professor Brij Maharaj pictured in front looking at the barrows on display and addressing the diverse audience. Photo: Richard Dobson.

The Secretary of the EMMTA reported that the turnout exceeded expectations and because it was such a success, they intend to have a second function on the Hindu religious festival of Deepawali from the 21st of October. 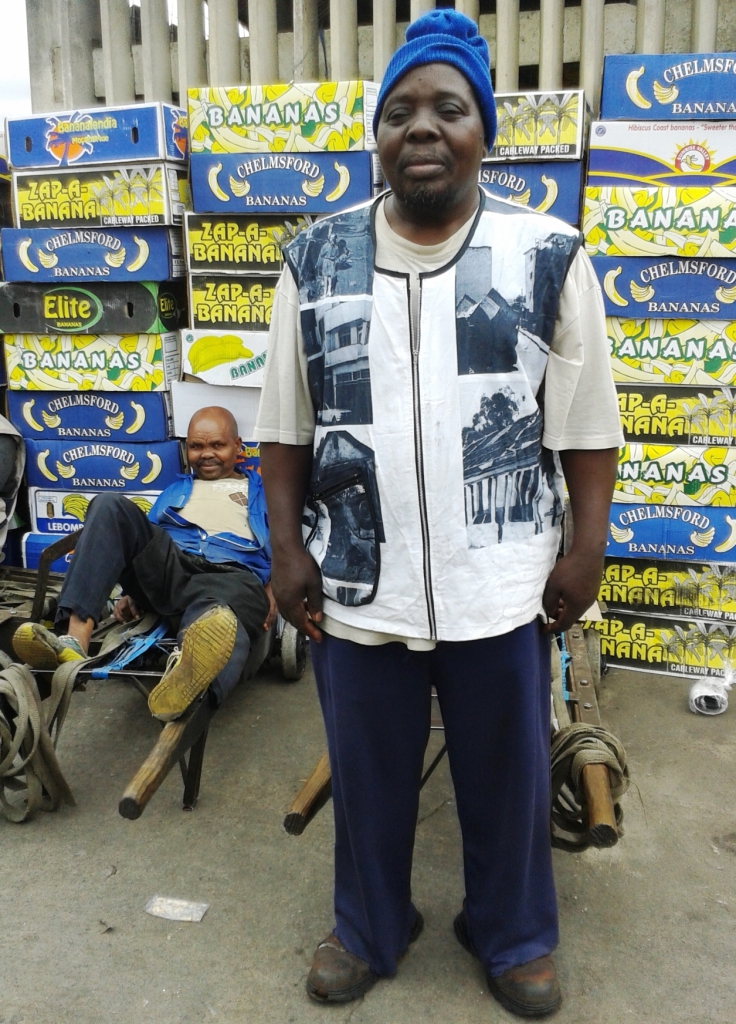 Mafuta, a barrow operator of 42 years euphorically echoed the sentiments above by saying, “It was so good seeing the different cultures celebrating their heritage together by showcasing their music and dance.” Regarding the exhibition, he added that they could identify their own historical experiences as community members working in the area for decades but what was particularly fascinating for him was learning about what preceded their time. 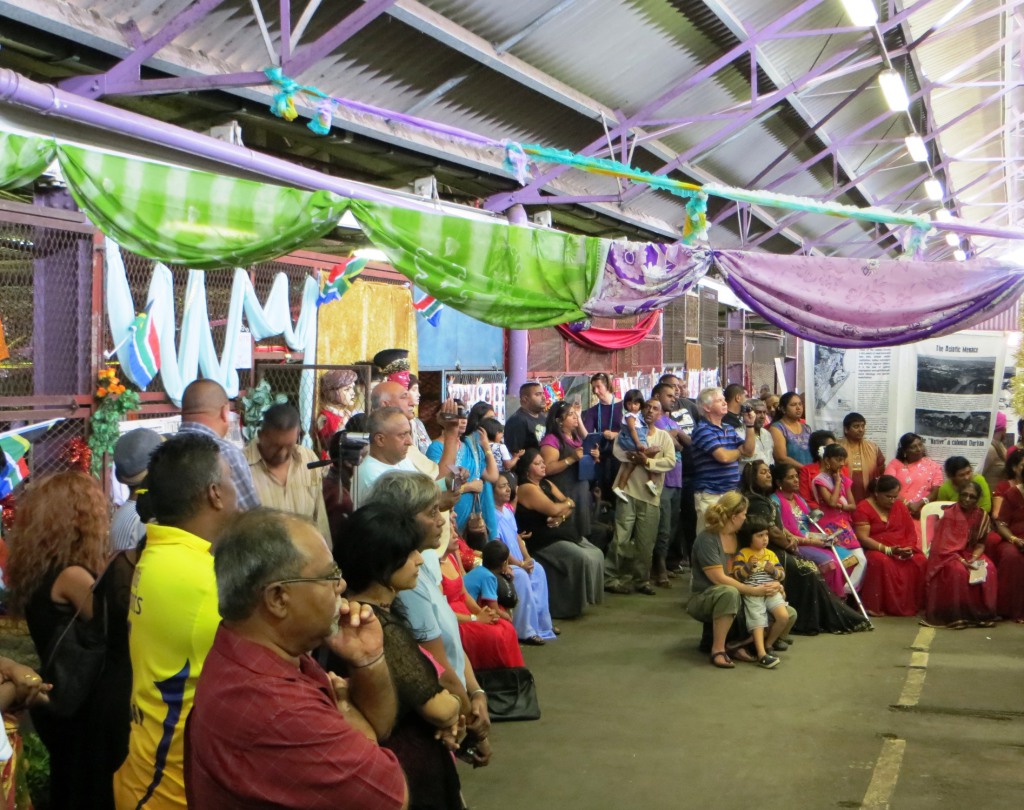 The creative use of the stalls through the exhibition and the heritage day event was a restorative and celebratory acknowledgement of not only the long history of the market, but also that the market continues to thrive.