Asiye eTafuleni (AeT) was compelled to engage with a series of refreshingly relevant questions like; what makes your project a driver of change? How does your project demonstrate a holistic and proactive approach? Is the project aligned to government’s development strategy? Based on the answers to these and more questions, AeT was shortlisted from thirty nominations in the Civil Society category, as one of three finalists and finally awarded winner of the Civil Society Award for 2011. To read AeT’s winning entry, click here for the full report on the [download id=”27″]. The announcement happened on the 3rd of November 2011, where the Southern Africa Trust in partnership with the Mail & Guardian newspaper hosted the Annual ‘Investing in the Future and Drivers of Change’ awards gala dinner at the Sandton Convention Center in Johannesburg, South Africa. 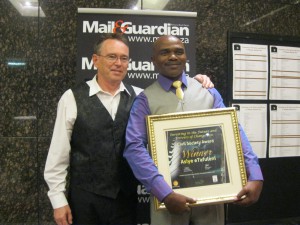 The co-founders of AeT with the Civil Society Award

The Drivers of Change component of the awards was presented by the Southern Africa Trust in four categories: civil society, business, government and individual. The Investing in the Future component of the awards was presented by the Mail & Guardian newspaper in several other categories such as Investing in Education and Investing in Life. The merger of the previously separate Southern Africa Trust and Mail & Guardian awards in the civil society and business categories respectively was reportedly intended to streamline the awards and offer greater accolades to winners in these categories.

Furthermore, these awards were reportedly designed to recognise companies, civil society organisations and individuals from across the Southern Africa region, believed to be making an impact on the lives of people living in poverty, through the development and implementation of effective public policies and strategies. It was added that the award was created 22 years ago, with the intention to publicise the often unsung contributions made to the future of the country and its citizens. It was also intended to heighten public, government and business awareness about the various types of social investment activities.

It was also elaborated that the award has been established to hold up living examples of innovative practices, exceptional approaches, inclusive attitudes and effective processes. Neville Gabriel, Executive Director of the Southern Africa Trust, had this to say about this year’s entries: “Each year, the quality of nominations for these awards improves. Among this year’s winners are some of the finest examples of real progress being made to engage all sectors of our societies in a cooperative effort to overcome poverty.”

Botswana’s President, Ian Khama gave the keynote address at the awards and other guests of honour included the former Prime Minister and current Speaker of the National Assembly of Namibia, Dr Theo Ben Gurirab; and Graça Machel, who was called upon to hand over the Civil Society Award. 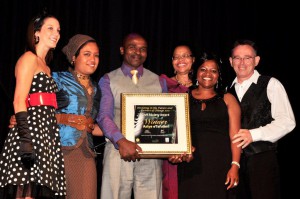 During the short video clip introducing AeT as a finalist of the Civil Society Award category, this was how AeT was described:

“Asiye eTafuleni means “let’s go to the table”. By taking a “bottom up” approach to compliment local government efforts, Asiye eTafuleni collaborates with informal traders, local government officials, and town planners to creatively include the voices and interests of informal traders in urban planning and development. As a social facilitation agency, AeT has been pioneering in research, multi-stakeholder dialogue and negotiation, policy development, and service delivery aimed at filling the pro-poor development vacuum that exists in urban design and planning.

Through its innovative work in the Warwick Avenue market area in Durban, South Africa, Asiye e Tafuleni is a driver for systemic change towards more inclusive cities across the southern Africa region. The initiative exemplifies higher level partnerships that work for the benefit of vulnerable groups at a very local level, the judges said.”

Mail and Guardian reporter, Aphiwe DeKlerk, has written an exclusive article on Asiye eTafuleni on page 6, titled ‘Giving the Sidelined a Voice’. Also, Neville Gabriel refers to Asiye eTafuleni as winners of the Civil Society Award in his article on page 9, titled ‘Taking Charge of the Future’. For more pictures from the event, go to AeT’s Facebook page. 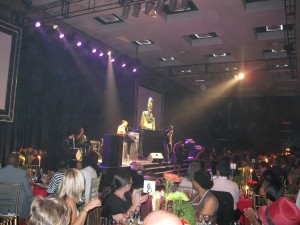 The Awards Gala Dinner at Sandton Convention Centre in Johannesburg

For Asiye eTafuleni, this is a triumph for the recognition of informal workers as critical components of the urban fabric and economies locally, regionally and internationally. In light of the political ambivalence and/or the mixed signals towards the informal economy in many parts of the world including South Africa, the more support there is for the valuable contribution of the informal economy, the less the big decision makers can subvert development work, with and for the informal economy. Therefore, this award signals support gained at a Southern Africa regional level for the efforts towards inclusive development. This comes with perfect timing after the recent international recognition of iTRUMP: Warwick Junction, as facilitated by AeT, at the ‘Design with the Other 90%: CITIES’ exhibition on view at the United Nations Headquarters in New York.

For AeT, the ultimate affirmation of the evening was the concluding remark before being presented the Civil Society Award, namely:

“The judges were blown away by the organisation’s approach to complex and common issues in South Africa’s cities. It is an innovative, progressive organisation setting new standards that should be replicated widely, they said.”