The 17-year old iconic mural of the Zulu Goddess, called Nomkhubulwane, painted on the wall beneath the connecting bridge to the Herb Market in Warwick Junction, has received its third facelift since 1994. Journalist Wanda Henig reports in the local newspaper, Sunday Tribune (17 July 2011, page 32): 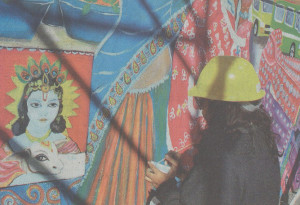 ‘Sunday is a day when you can stop, park your car, get out of it and, after passing the time of day with a couple of barbers hoping for business and an idle taxi driver, appreciate the iconic mural – more than 2 stories in height and three taxis long – depicting Nomkhubulwane, known as the Zulu goddess of rain, nature and fertility.’

The latest make-over has been sponsored by eThekwini’s Department of Arts and Culture and implemented by the Community Mural Projects Trust (CMPT). Henig quotes Terryanne Stevenson, Durban Artist and co-founder of CMPT, who describes the meaning behind this mural:

Stevenson explains that the outreached hands over the imagery of people who sell from and use the markets of Warwick Junction, including features of the greater eThekwini area, represents ‘…the fertility, the blossoming and the prosperity of the city’. It is notable that over the years the positive meaning and interpretation attributed to the imagery has evolved.

Read more on this fascinating article in the [download id=”14″] article.