The horizontal stove design emerged as an option from the MIT D-Lab, as an iteration of the existing cooking method, combined with learning’s from smoke and fuel efficient stove technologies- such as RocketWorks. The concept design aimed to use existing materials and technical insight to inform the design of the stove to optimize for efficiency in the stove.

The horizontal stove would mean that mealies could be cooked lying horizontally rather than standing vertically in the cooking drum. The 4 main advantages of this design are: more surface area of the drum would be heated up, the fire underneath would be contained and insulated. The stove would be more stable, providing the potential of more safely draining the boiling water – which was a major safety hazard emerging form the cooks decanting the mealies from the raised plinths. 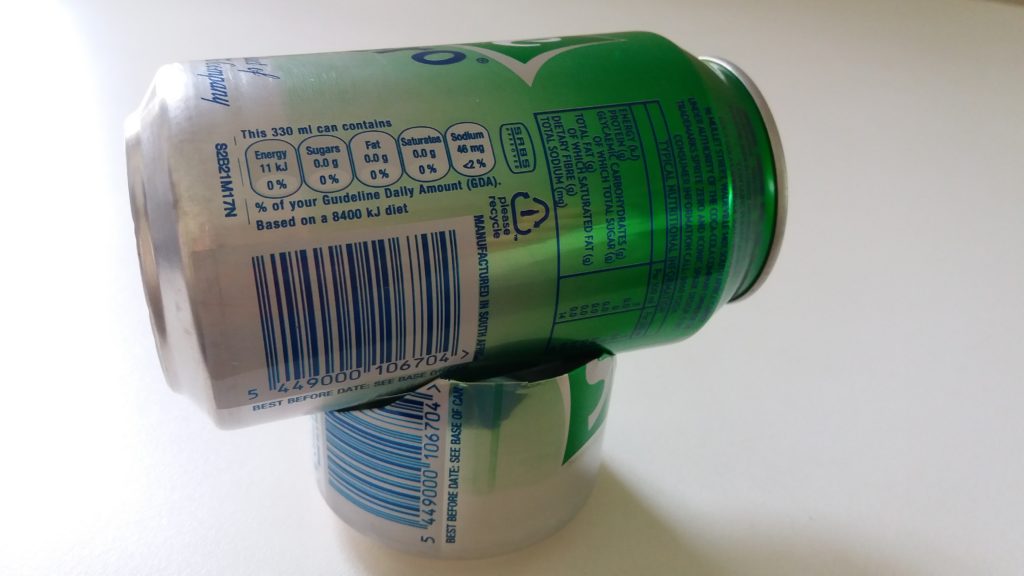 The horizontal stove concept, modeled using coldrink cans, which was presented to traders to help them visualize and critique the design at it’s conceptual stage.

If the supply and manufacturing of the prototype stoves was to be sustainable to the community, the construction would have to be engineered to be easily replicated on the street, in terms of design material, complexity and labour skill. One and a half standard drums were procured from mealie cooks, and the stove prototype assembled in a conventional garage in approx. 6 hours.

The stove consisted of two main parts: the top drum and the bottom drum. The top drum was the drum that would house the mealies, and the half drum being the stove component, and insular fire chamber. The fire chamber was composed of three components- an outer shield, as well as internal chimney and grate which would help the stove burn cleaner by better channeling the air draft, which would enable the fuel to burn more efficiently, resulting in the emission of less smoke. 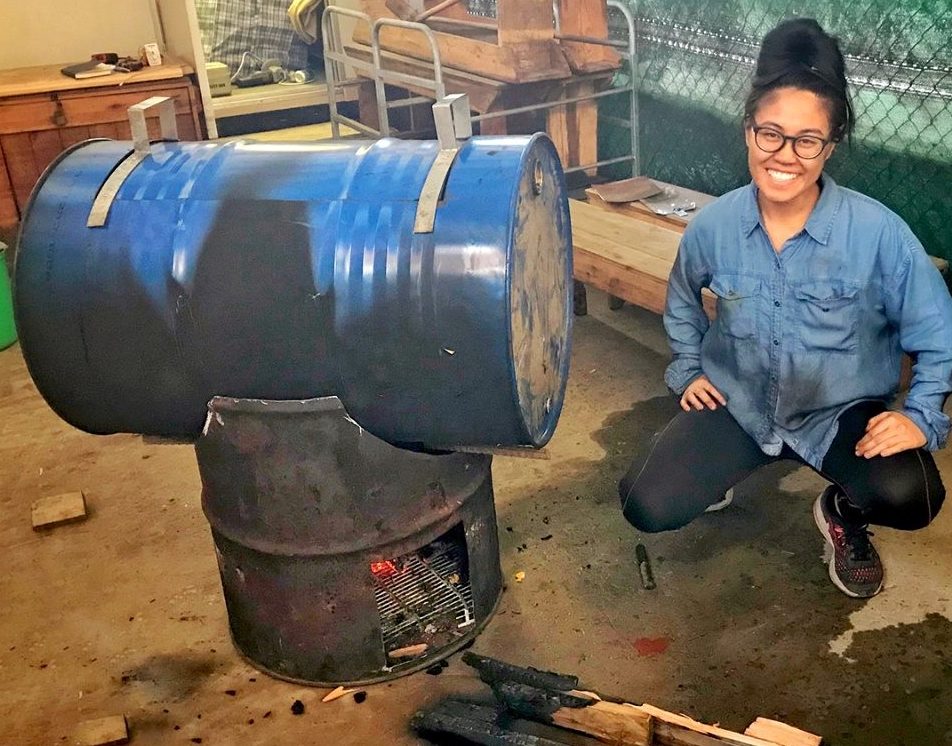 AeT and MIT D-Lab boiling test, done off-site in a controlled environment, during refinement phase of the stove design.

Before the stove was tested on site, several boiling tests were conducted to evaluate the stove’s performance, followed by the refinement of minor design details. Whilst the boiling of water was comparable to the current observed boiling time of the Cooks had been met, the true test would be whether its performance cooking mealies under ‘normal’ site conditions.

Two cooking trials were done on-site at the mealie cooking facility, with the first being a consignment of 8 dozen mealies which was being prepared for one of the trader cooks (with their assistance). After the success of the first batch of mealies cooked, another 10 dozen mealies were cooked in the same way – as a means of testing performance at maximum cooking capacity. 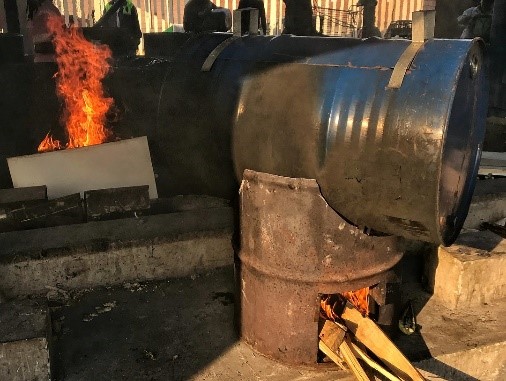 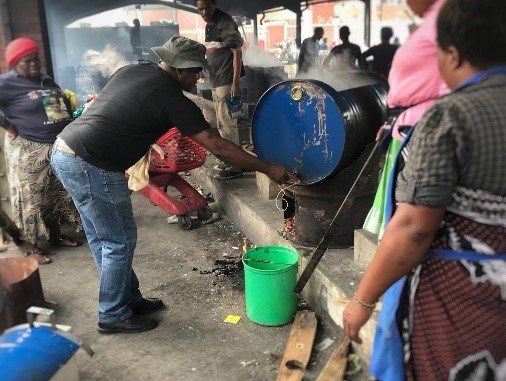 In critique the cooking tests, the horizontal stove still emitted smoke (perhaps because of over-fuelling the stove), but could still be considered significantly less than unusual. The draining of the boiling water from the drum after cooking, would also still need refinement. However, the participating and spectating trader comments suggested that cooking tests had been a success.

One mealie cook said “I will steal this design and reproduce this stove myself for sure”, whilst another said “I could easily make this design better” and proceeded to show the team how. 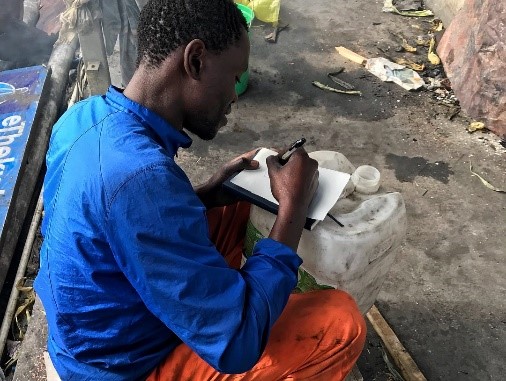 In addition, traders commented on the improved safety of the horizontal stove. At the close of the exercise the cooks had determined what the name of the stove should be: “qeda usizi” – the Zulu phrase meaning ‘end our suffering’. 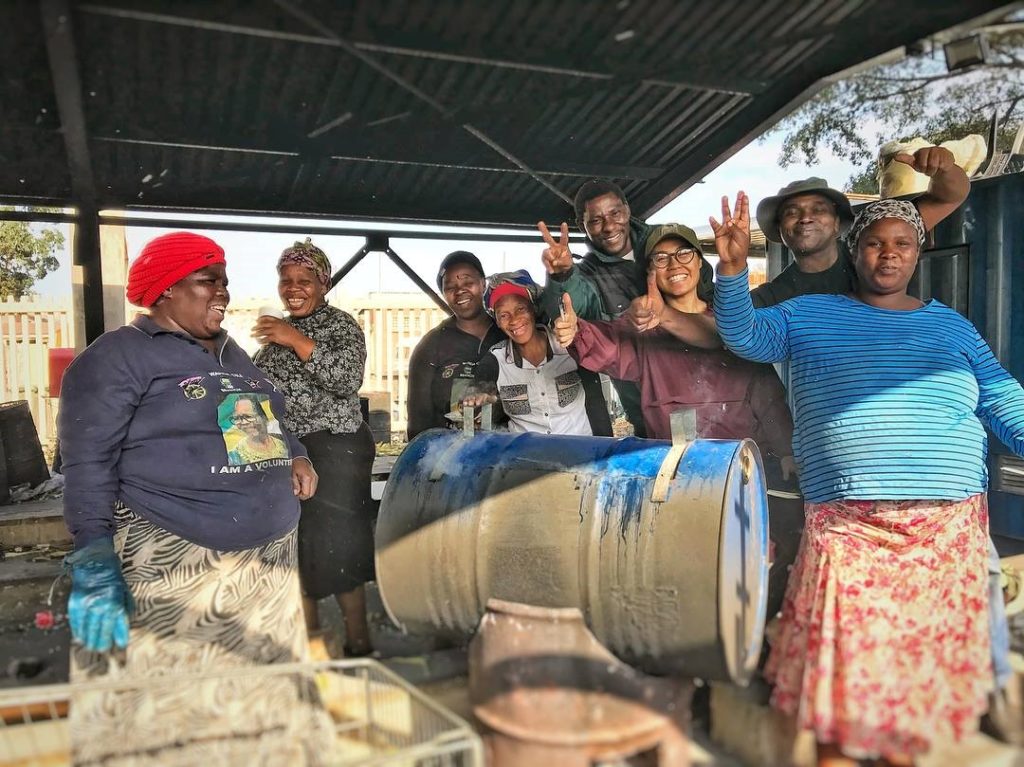