The first in the four series article presented our work in the field of design. The second in the series will reflect on our work in the field of research, or what we call “urban intelligence”. Asiye eTafuleni (AeT) works to deepen knowledge on the informal economy (i.e. street traders, waste pickers etc.) in order to contribute to informed research, urban dialogue, planning and design processes.

AeT’s approach to research draws on principles of community-based or participatory action research (PAR) processes. This does not simply refer to research that is conducted in community settings, but rather research that is centred on informal workers challenges and that explicitly engages with them. AeT’s most effective PAR tools comprise work experience and exposure dialogue programmes (EDP) with informal workers. 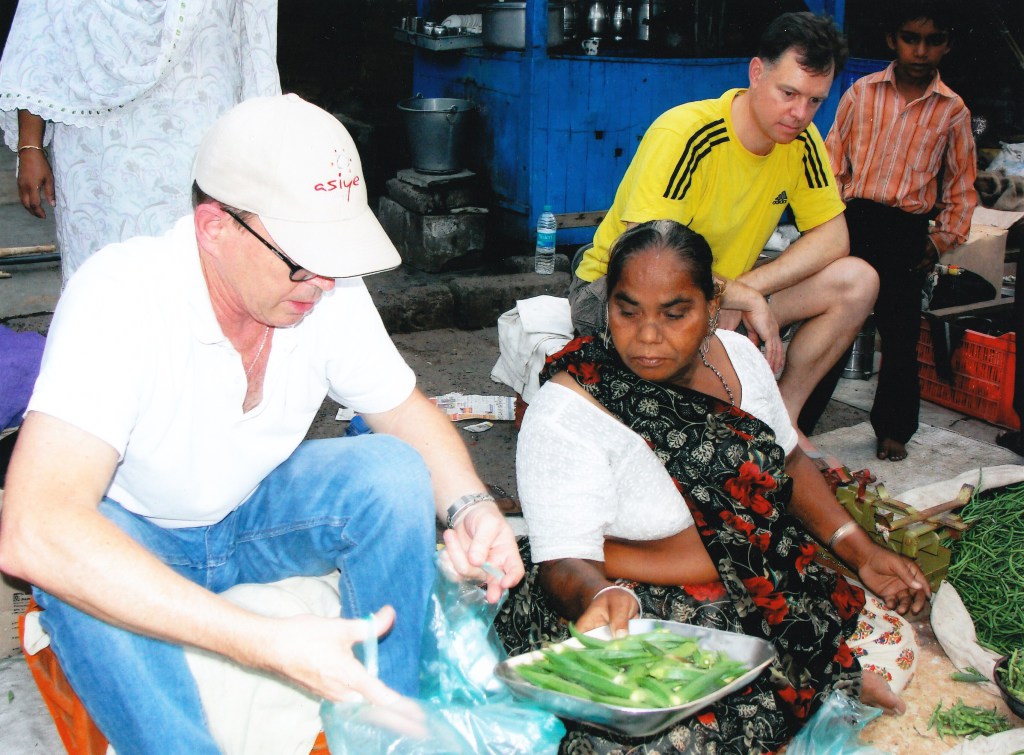 AeT’s PAR tool of EDP was inspired by practical experience gained from Inclusive Cities partner SEWA’s EDP. Pictured here are AeT’s Project Leader with street vendor and SEWA member in Ahmedabad, and WIEGO’s Operations Manager in the back. Photo: SEWA.

AeT’s PAR approach ensures that the insights of informal workers enhances the knowledge and understanding of researchers about community dynamics and conditions. Furthermore, the knowledge-building process is usually connected to planned community change, integrated within AeT’s Project work. 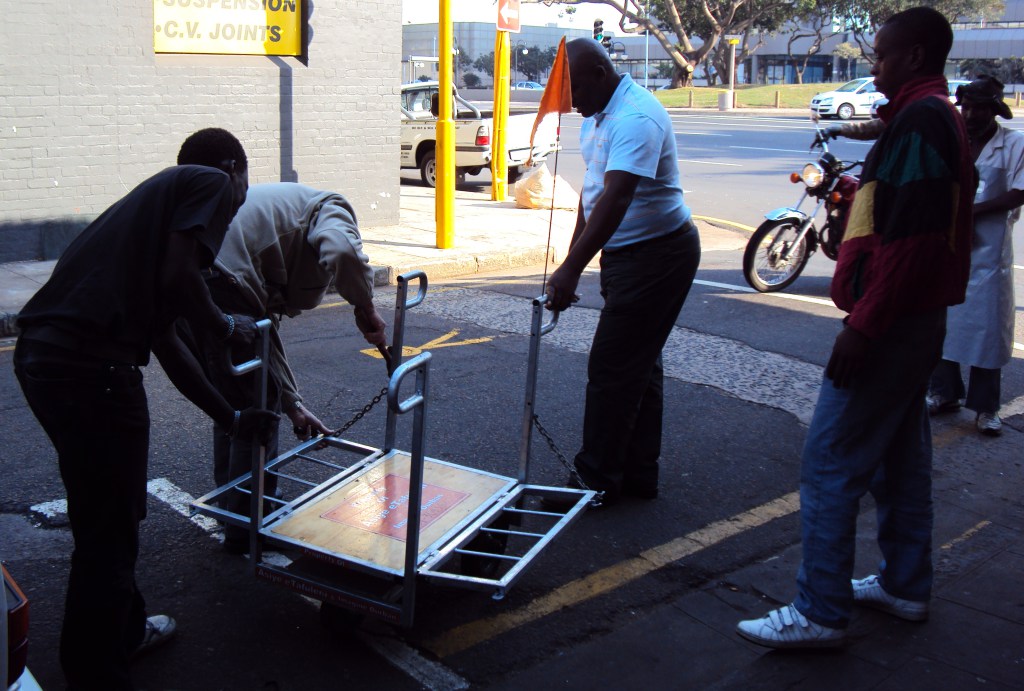 Part of AeT’s PAR tools in the realm of design means acquiring constant feedback about the design, management and maintenance of design interventions. Here, AeT staff are responding to a call by informal recyclers to maintain a prototype trolley that was being tested during the pilot phase. Photo: Tasmi Quazi.

Below is a list of research initiatives and those linked to project work, ongoing from 2014:

Durban Informal Economy Budget Analysis: This research was done by Glen Robbins and Tasmi Quazi under the supervision of a Women in the Informal Economy: Globalising and Organising (WIEGO) research team as part of WIEGO’s Informal Economy Budget Analysis (IEBA) initiative. IEBAs have been undertaken in a number of cities over more than a decade, with the aim of making visible the nature of budgetary processes and commitments as they might impact informal workers. The research is geared to support learning by informal workers, support organisations and government officials. 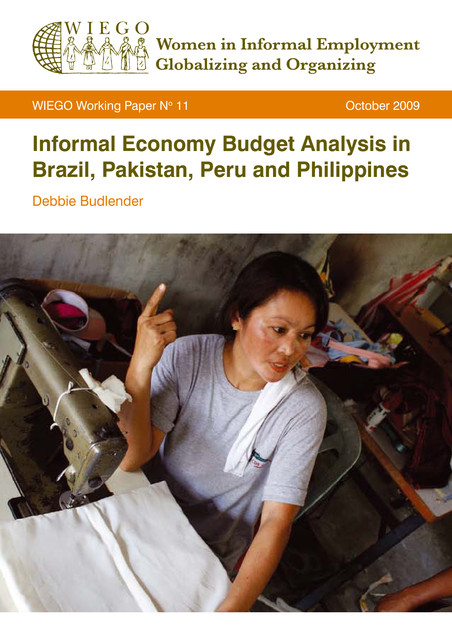 Informal Economy Monitoring Study Waste Pickers Report: This research is led by WIEGO in consultation with its Inclusive Cities partners, including AeT. The IEMS study gathered data on the impact of three major driving forces on waste picking in Durban, namely the macroeconomic environment, institutions and value chain dynamics. A total of 152 waste pickers were interviewed, 75 of these also participated in focus group discussions which were facilitated by AeT. AeT also facilitated the completion of the Durban IEMS Street Vendors Report which also forms a part of the overall IEMS programme, accessible here. 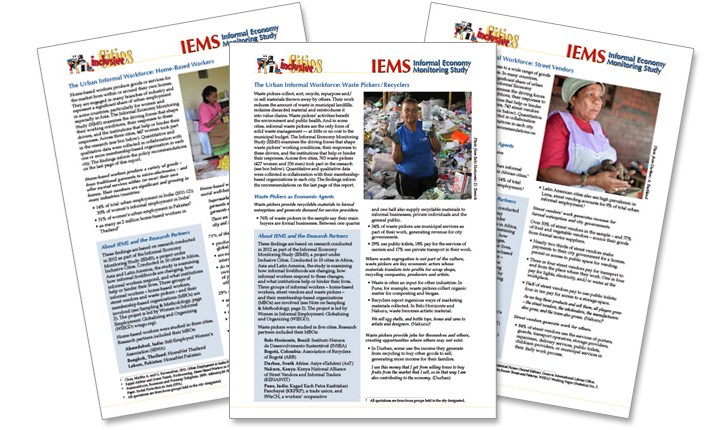 Technology and the Future of Work: This year-long international scoping project is funded by Rockefeller Foundation in partnership with WIEGO and Practical Action, to determine the disruptive forces of present and future technologies impacting the future of informal work. AeT is facilitating the profiling of informal workers of Durban, in consultation with two other cities also being profiled, namely Lima and Ahmedabad. 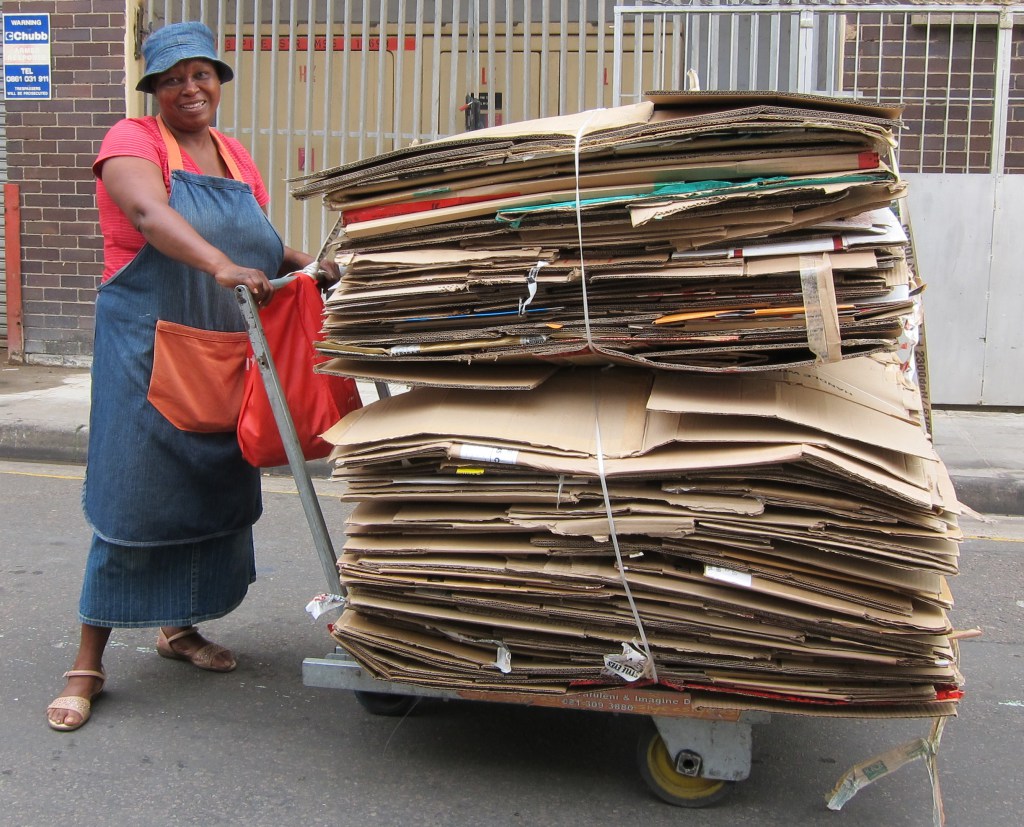 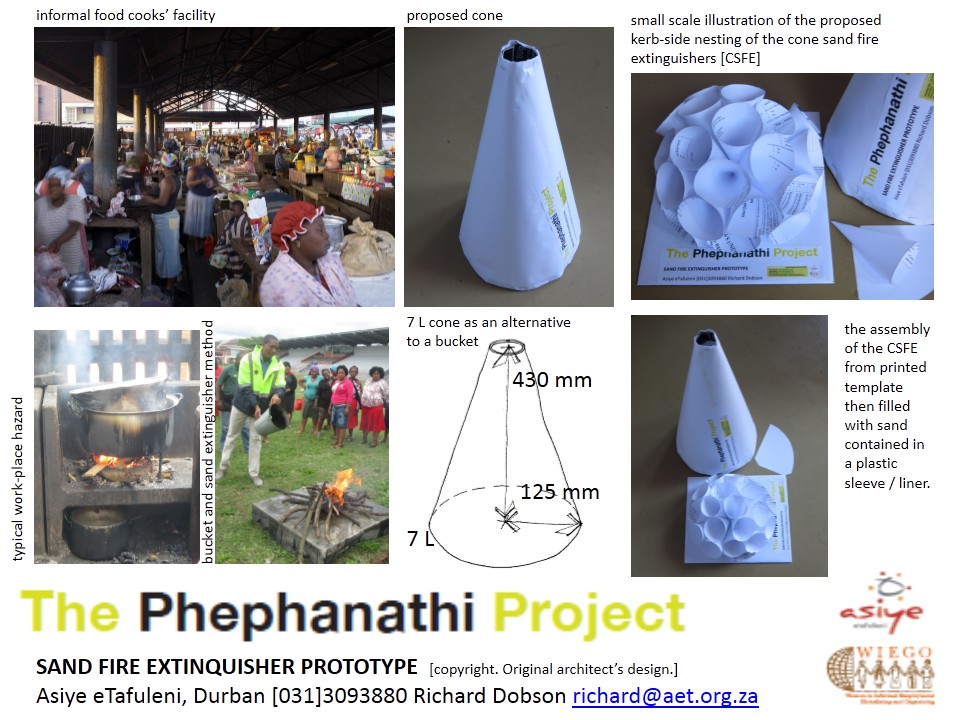 The Pephanathi research phase has resulted in the development and testing of prototype designs to address traders’ workplace hazards. Pictured above is a Sand Fire Extinguisher developed by Richard Dobson.

MHealth: this is an international scoping project funded by Rockefeller Foundation to determine informal workers access to health care.

Zero-waste project: This began as a feasibility study exploring bio-gas digestion as a means of dealing with informal workers’ organic waste. AeT facilitated the research process with post-graduate students from Massachusetts Institute of Technology and University of KwaZulu-Natal’s (UKZN) School of Business and Leadership. Subsequently, UKZN Civil Engineering Department has been exploring the concept of zero-waste strategies in Warwick Junction. 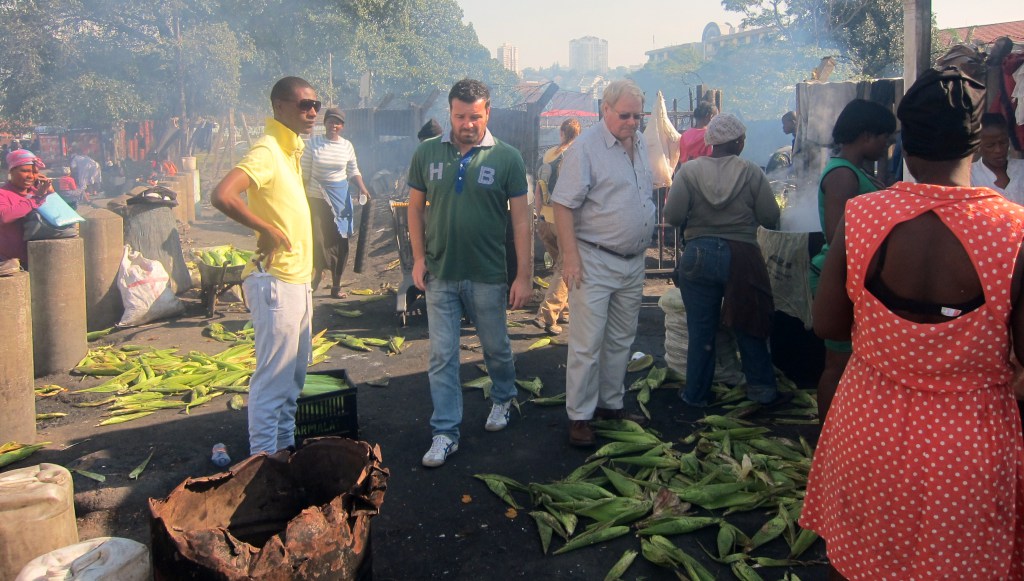 MIT & UKZN post-graduate students at the Mealie Cooks facility conducting an assessment of the amounts of organic waste generated by the mealie cooks. Photo: Tasmi Quazi.

Kanyenathi Infrastructure Audit: The Comic Relief funded research is currently underway and designed as a PAR process involving photo-auditing, measurement and survey questionnaires related to the workplaces of informal workers within 3 market districts in the City. The aim is to determine the infrastructure and urban management challenges and needs of the informal workers, and in the process empower them with research and presentation skills. 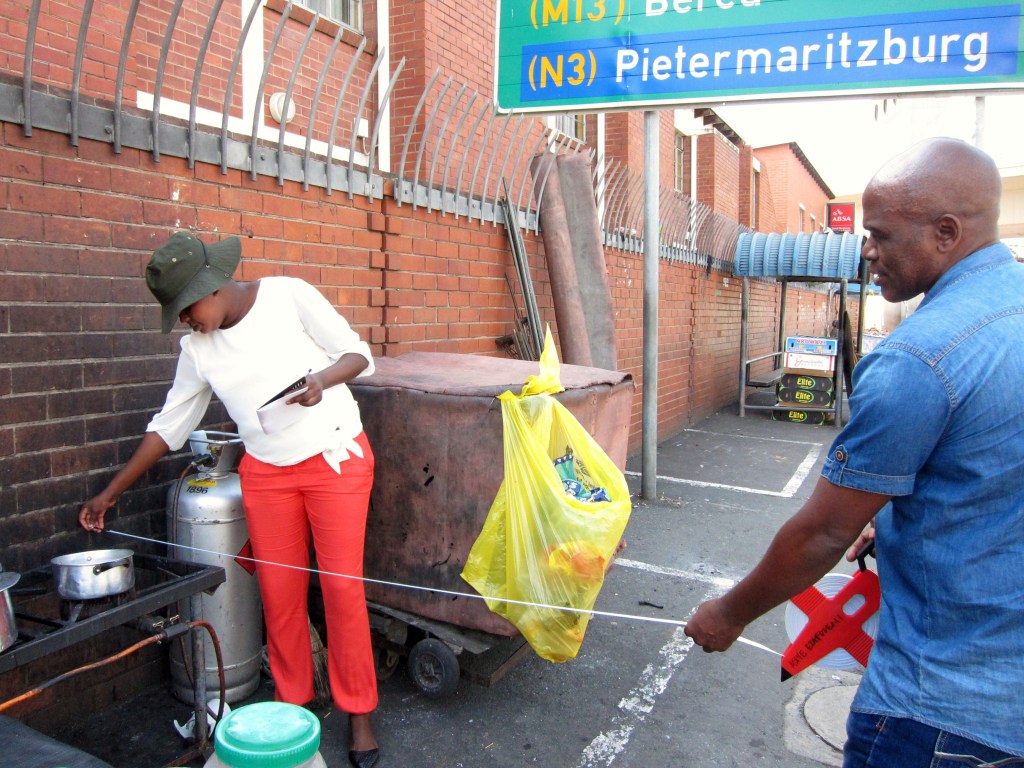 The Kanyenathi project intends to use new research techniques such as infrastructure audits with informal workers as part of its PAR methodology. Photo: Tasmi Quazi.

In conclusion, AeT’s approach to research seeks to engage informal workers as participants that work together to define, analyse, plan, implement, and evaluate actions in order to address their challenges. In the process, informal workers are empowered with enhanced skills in being able to use the research data to plan their own projects or instigate community change. The full scope of AeT’s PAR approach described here is currently being tested with the Kanyenathi Project. 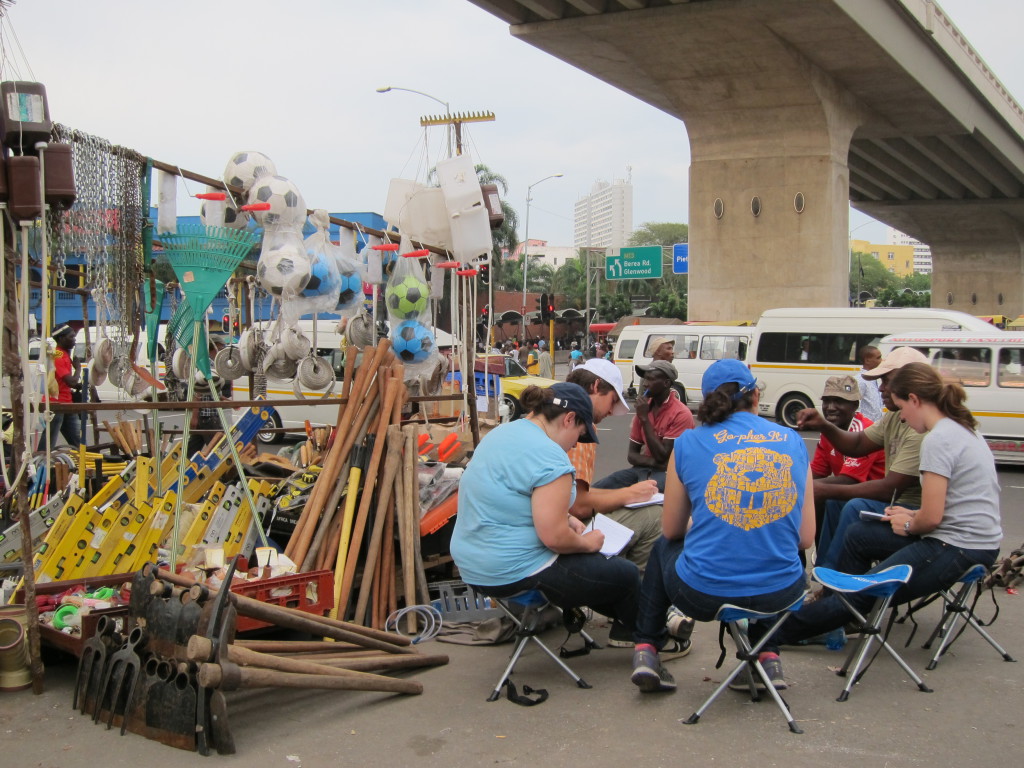