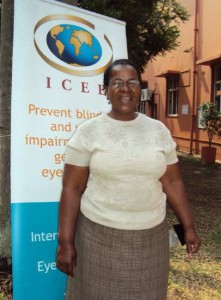 On 14 October 2010, the International Centre for Eye care Education (ICEE) celebrated this year’s World Site Day (WSD) by providing free eye care examinations to the informal workers of Warwick Junction and the inner-city area. WSD is an annual day of awareness to focus global attention on blindness and vision impairment. It serves as a countdown to ‘Vision 2020: The Right to Sight’, a global initiative created by World Health Organisation and the International Agency for the Prevention of Blindness. 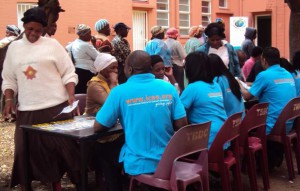 This event at the Warwick area was initiated by NPO Asiye eTafuleni that sought to improve the sight, and consequently, the working lives of informal workers. This was conceived as part of the NPO’s contribution to the national, and hopefully the global movement of ‘67-minutes of service’ for Mandela Day. This is partly because informal workers often lack both time and money to care for their vision, let alone their health. Subsequently, what was conceived as ‘67-minutes of service’ in fact escalated into a 5 hour event where 411 traders received eye tests, and 250 of whom were equipped with reading glasses.

The WSD event kicked off from 9am at the SEDA eThekwini Business Centre at the heart of the Warwick Junction area, which graciously sponsored the use of their conference rooms for the various eye screening processes. Creative energies were abound as Asiye eTafuleni staff along with groups of ICEE staff, went to the sites of the informal trading communities to conscientise and incentivise informal workers to get their eyes tested. The ICEE staff efficiently and cheerfully facilitated the eye testing process, as informal workers patiently queued for their turn. After many received glasses, the air was filled with peals of excitement as they were able to accomplish tasks that were previously near impossible, as threading a needle and reading.

The eye tests carried on with purpose and energy beyond the planned time deadline due to the growing numbers of informal workers that kept appearing. However, seeing the high demand for eye tests by the community; late comers were recorded on a waiting list for another planned event of this nature in the near future. The organisers and staff from Asiye eTafuleni, ICEE and SEDA eThekwini enjoyed an inspirational process and outcome because of the immense gratitude from the informal workers that received much needed eye care.

The full report and photo’s from the [download id=”1″].