Menu
You are here: Home / News / Uncategorized / The Launch of ‘Design with the Other 90%: CITIES’

A Reflection by Tasmi Quazi 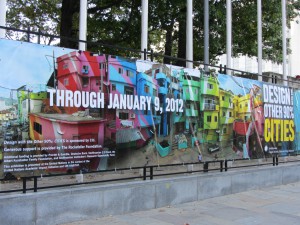 Outside the UN Headquarters publicising the exhibition

The launch of the ‘Design with the Other 90%: CITIES’ exhibition, a project by the Smithsonian-Cooper Hewitt, National Design Museum,  was kicked off with a press preview held on the 14th of October 2011, and the Opening Event on the 17th of October at the United Nations (UN) Visitors Centre’s Gallery in New York.  This will be on exhibit until 9th of January 2012 with the intention of having the exhibition travel around major centres in the US.  The UN venue is the home for this exhibition that is in its second installation, the first being ‘Design for the Other 90%’.  The motivation behind the encouraging shift in the semantics of ‘design for’ to ‘design with’ implies an understanding that designing for social change is a process of collaboration and horizontal learning, rather than being authoritarian and parentalist.

For the iTRUMP Warwick Junction display, the organisers selected an image of the Early Morning Market as the central iconic piece with an aerial map and before and after images of the major development nodes

The iTRUMP: Warwick Junction project was selected as one of the 60 projects profiled in the exhibition that demonstrates innovation resulting from designing WITH the informal ‘poor’ in addressing some of their developmental challenges.  Warwick Junction was one of the few projects that showcased development innovation with informal workers. Furthermore, it was one of the handful of projects fortunate enough to feature on all the media and dissemination platforms of the massive ‘Design with the Other 90%’ project.  This included the exhibition itself which featured a number of the 60 projects, and which incorporated a participatory video-piece made by film-maker Cassim Shepard.

Thirdly, the catalogue, which reads more like a fascinating book comprises various essays interspersed with references to the 60 selected project case studies which are discussed in detail.  Furthermore, the ‘catalogue’ includes interviews with thought leaders discussing emerging practices and possibilities of socially responsible design which address the challenges emanating from the rapid increase in urbanisation and informality being experienced in developing countries. 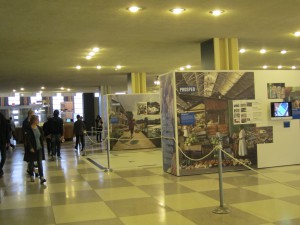 The iTRUMP Warwick Junction display amidst the other projects

Fourth, the website which profiles all 60 selected projects, and lastly, a 4-part TV documentary that features a handful of the projects.  The TV documentary is scheduled to appear on the Smithsonian Network, and the first two episodes will be aired on 29th of November 2011, and the last two parts in which iTRUMP: Warwick Junction is featured will air on the 6th of December 2011.

At the press preview held on the 14th of October 2011, journalists were invited to engage the organisers from Smithsonian-Cooper Hewitt and a few representatives from the projects being exhibited that were in attendance.  Representing the iTRUMP: Warwick Junction project was Asiye eTafuleni’s (AeT), Tasmi Quazi.  AeT is a Non-Profit Organisation based in the area and continuing to support the iTRUMP initiative.  In addition, AeT has been responsible for the sourcing of the iTRUMP display material, interviews and video-content for the participatory film and TV-documentary. 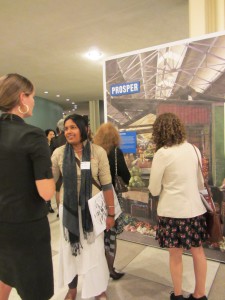 The Press Preview was an informal platform in which project representatives like Tasmi Quazi were able to engage the media officials by referring to the project material exhibited and have discussions on the project process and experience of designing with the informal ‘poor’.  Paying particular interest to iTRUMP: Warwick Junction project was Mr Adala (Second Secretary of the Kenya Mission to the UN) who purchased a copy of the book ‘Working in Warwick’ with the intention to give it to his colleagues in Architecture and Urban Planning Departments within local government in Kenya.  Mr Adala emphasised ‘…the disconnect of some elements of western oriented planning and design to African or developing world settings.’  He added that the ‘Working in Warwick’ book provides vital learnings on an alternative approach to urban planning that is more appropriate to other African contexts in particular, instead of the pursuit of the urban modernist approach adopted from developed countries that do not meet the needs of the informal economy.

Representatives from another project called the ‘Vertical Gym’ commented that what struck them most about the Warwick Junction project is that it is a city government initiative that has been able to achieve an immense measure of scale in the implementation of design work, where as many of the projects at the exhibition were once-off and small-scale.  They added that the fact that the work in iTRUMP is still on-going alongside the work of an organisation like AeT, is also commendable from a sustainability point of view, because many of the projects at the exhibition are still in their infancy and consequently unable to demonstrate sustainability yet. 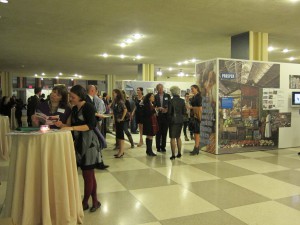 The exhibition also offered an opportunity for AeT to network with a very innovative New York-based organisation called Project for Public Spaces. The meeting sparked a mutual interest in future collaboration and knowledge-sharing due to the shared values of implementing urban design as responsive ‘place making’ through community-driven processes. On visiting the exhibition with the founder of PPS and a UN-Habitat official, the Vice President of PPS commented that their shared opinion was that iTRUMP: Warwick Junction is the most impactful of all the projects on display.

At the opening event speeches, funders and organisers commented that ‘Design with the Other 90%’ and the 99% movement sweeping across USA and the world, is increasingly serving to raise awareness in the urgency of addressing the grave socio-economic challenges facing society. This condition of increasing poverty and inequality is no longer just a developing country issue, but is also affecting developed countries in lieu of the global economic recession.  Therefore, having platforms like this exhibition not only creates awareness of the creative possibilities to addressing some of the greatest development challenges of our time, but it also advances the understanding of alternative practices that are more appropriate to developing country contexts.  This includes understanding social design as a collaborative, community-driven process premised on horizontal learning.  For iTRUMP specifically, it also includes a holistic approach by harnessing a multi-disciplinary team, uniquely positioned within city government, as an area-based approach that sensitised and implemented supportive policy and urban management strategies.

This exhibition is receiving media coverage far and wide, for a taste of some of the reviews, follow the links below: