Menu
You are here: Home / News / Uncategorized / The Travels of the ‘Working in Warwick’ Exhibition

The images of the ‘Working in Warwick’ exhibition were taken by the internationally renowned Architectural Photographer, Dennis Gilbert. This vibrant library of images is also published in the book ‘Working in Warwick: Including Street Traders in Urban Plans’, co-authored by Asiye eTafuleni’s (AeT) Richard Dobson and Caroline Skinner. The motivation behind the exhibition was to capture the history and the endemic energy of informal activities in public spaces of Warwick Junction, by optimizing the power of photographic record.

However, this was implemented as a unique joint product, combining a book launch and exhibition as a tool for dissemination. As one stakeholder elaborated:

…the book was driven by the need to disseminate the message that INCLUSIVE CITIES REDUCE POVERTY, ARE POSSIBLE, AND NEEDED NOW and WIEGO identified Warwick Junction as a good example of what is possible. It was recognised that there was an urgent need for documentation of the experience of Warwick, and the book is a treasure.

The images are particularly striking due to their large scale and artistry, which an organiser explained:

We deliberately printed very large scale images which are seldom seen except in billboard advertising. We deliberately did this to create a strikingly different notion of informal work, by inducing an aesthetic jolt… Many people do not recognise informal work, however the technical proficiency used in the photographers’ images served to re-examine the informal work of the people. Subsequently, we used high quality material and large size images to elevate the images to a highly aesthetic realm, with the aim of conscientising and underlining that informal work is significant and important…

These were some of the public responses about the exhibition:

‘…The exhibition was a mirror image of what I had lived through most of my life – but in print form, and the book was an emotional experience for me. I was overwhelmed by the photography and like many others, I bought the book and we would not have done this unless it meant a lot to us.’ (Shop owner in the Warwick Area)

‘…The format, quality and content are professionally done. It shows reality without romanticising it. The photographs are not contrived images, they are real. They are presented in sequence and as a whole you get to appreciate the sense of pride in informal workers, and thereby you get to understand how they continue to work day in and day out to eek out livelihoods and support their families.’ (Book retailer & assistant at the opening function)

‘The book and exhibition was stunning and vivid and conveyed the essence of the dynamics of the Warwick area.’ (Architect)

‘The photos were fantastic, of the same class and professional quality as any other type of exhibition. Just because the subject matter is the informal economy, it was not of any lower standard and I appreciated that.’ (Architect & NGO professional)

To read more, click here to download [download id=”28″] which elaborates the motivations of the exhibition and book launch, including a technical review, the public responses and media coverage received, and key learnings of this project.

However, the ‘Working in Warwick’ exhibition first featured within a prominent Architectural firm’s office display, Allies and Morrison, located near the famous Art Museum, Tate Britain, during March 2008. Click here to view [download id=”29″] and [download id=”30″] of this event. To view more images from London, click here . 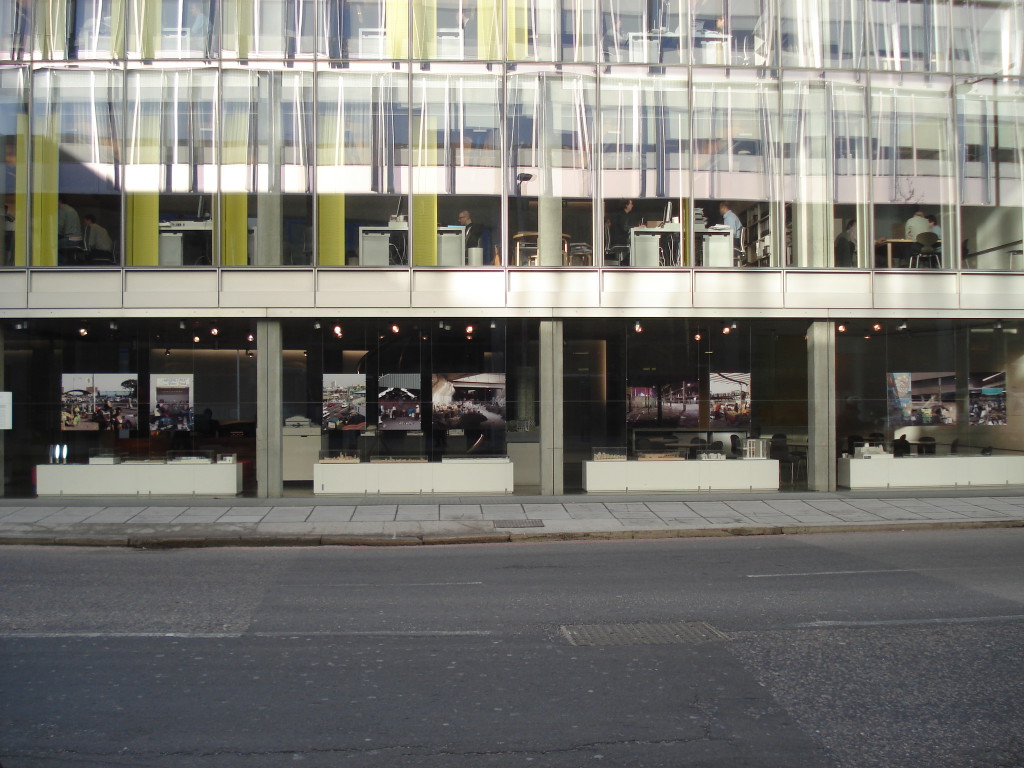 Thereafter the book and exhibition was first launched in South Africa at Durban’s Art Gallery during June 2009. To see more on [download id=”34″]. 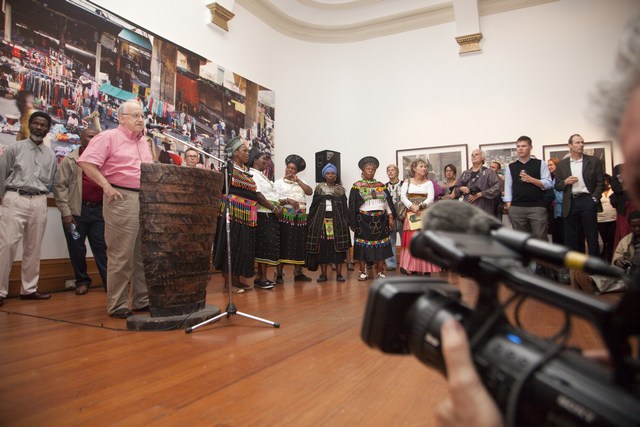 Exhibition and book launch in Durban

The Exhibition next travelled to Cape Town during February 2010, hosted by African Centre for Cities. Click here for [download id=”33″] which coincided with two other book launches as part of a week-long symposium. To read more on this event, click here. 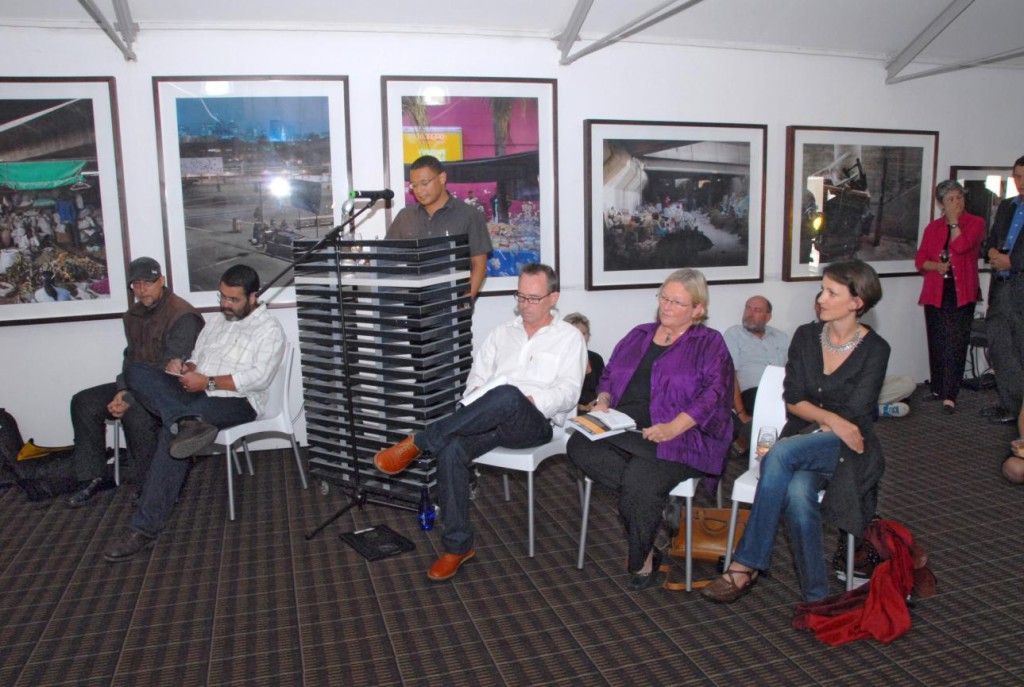 Thereafter the exhibition again travelled abroad during November 2011, but this time to Belo Horizonte, Brazil as part of one of  WIEGO’s public events hosted by the School of Fine Art at the University Federal of Minas Gerais. To view more images from the opening launch of this event, click here. 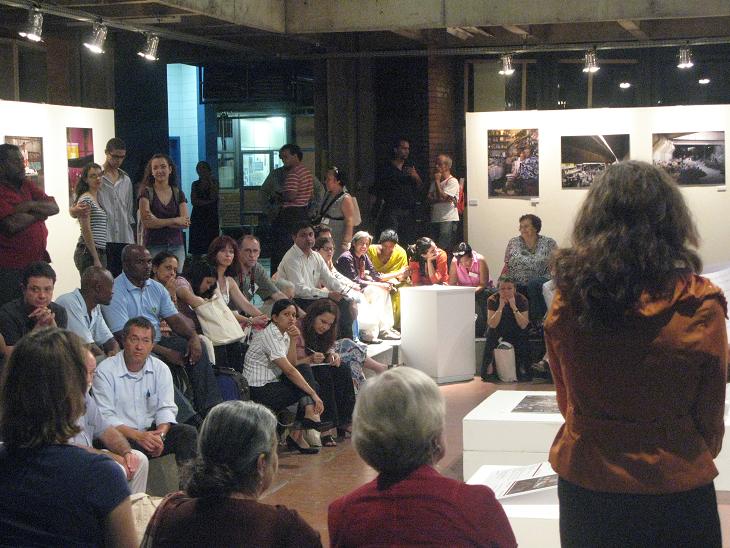 Other exhibitions that have featured images from the collection include the 2010 Shanghai Expo as organised by the South African Institute of Architects and the “Design with the Other 90%” Exhibition in New York during October 2010-January 2012.

Design with the Other 90 percent, the organisers selected an image of the Early Morning Market as the central iconic piece

Last but not least, the exhibition travelled to Johannesburg as part of the South African Informal City, at the Bus Factory in Newtown, on view from 11 November till 11 December 2011. For this event, AeT had facilitated the provision of photographic images from the ‘Working in Warwick’ collection and was an invited speaker at the associated Seminar. Click here to view more images from this event.

In conclusion, the feedback from the exhibition and book launch evaluation revealed a consensus that the outcomes exceeded expectations; in terms of the quality, the high numbers of visitors at the gallery and the book sales made. The fact that the exhibition is traveling nationally and internationally is testament to the increasing interest in this collection of images of Warwick Junction. It has been widely expressed that the exhibition has been an innovative and effective tool for the dissemination of the need to re-vision more inclusive city-making. Also, it has served to stimulate better interactions of a wide cross section of people across professions, races and classes through the mediums of high end-art and readership.