Menu
You are here: Home / News / Markets of Warwick / Towards Self Sufficiency: Community-based Tourism Opportunities for Informal... How do informal traders, long denied equitable opportunities for resources, space, and infrastructure, take advantage of a growing tourist market without compromising their cultural heritage? What kind of institution can best support traders’ skills building and financial self-sufficiency, and how will this institution sustain itself ? Over the last two weeks, we had the opportunity to help answer these questions through collaborative research and business incubation.

The CREATE program is a joint enterprise between the Massachusetts Institute of Technology’s School of Architecture and Planning and the University of KwaZulu-Natal’s Graduate School of Business Regional and Local Economic Development Initiative. Our team was made up of Thandeka Mbambo and Lisborn Khoza from the UKZN’s Young Researchers program and Elise Selinger and Danya Sherman from the MIT Department of Urban Studies & Planning. 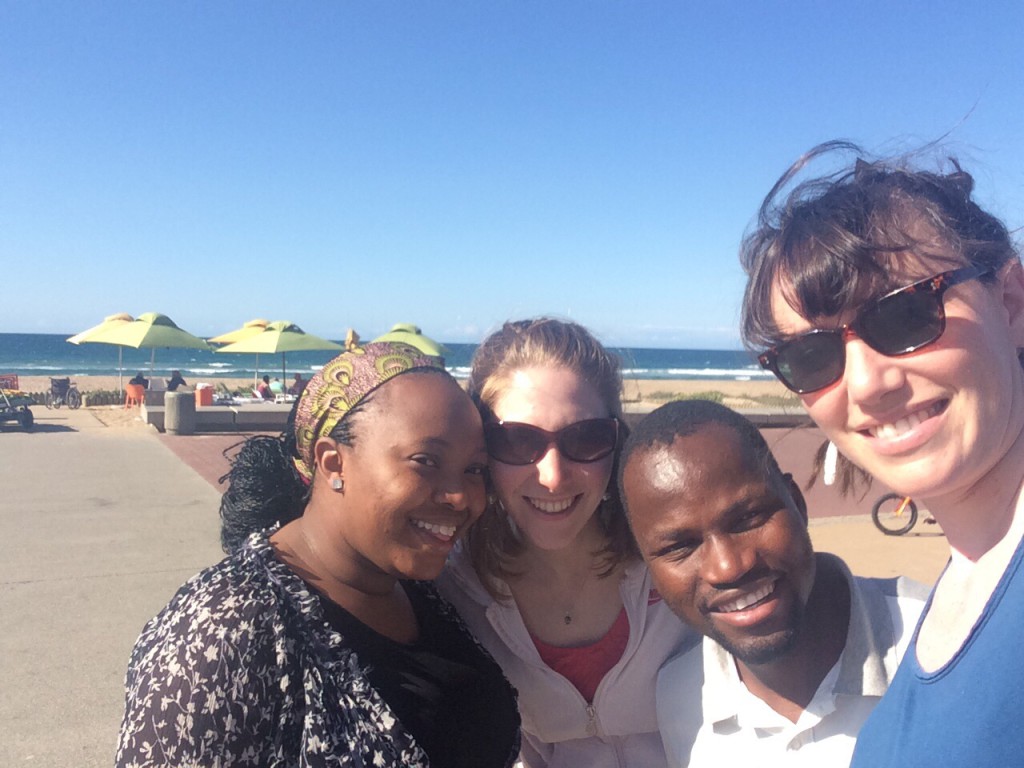 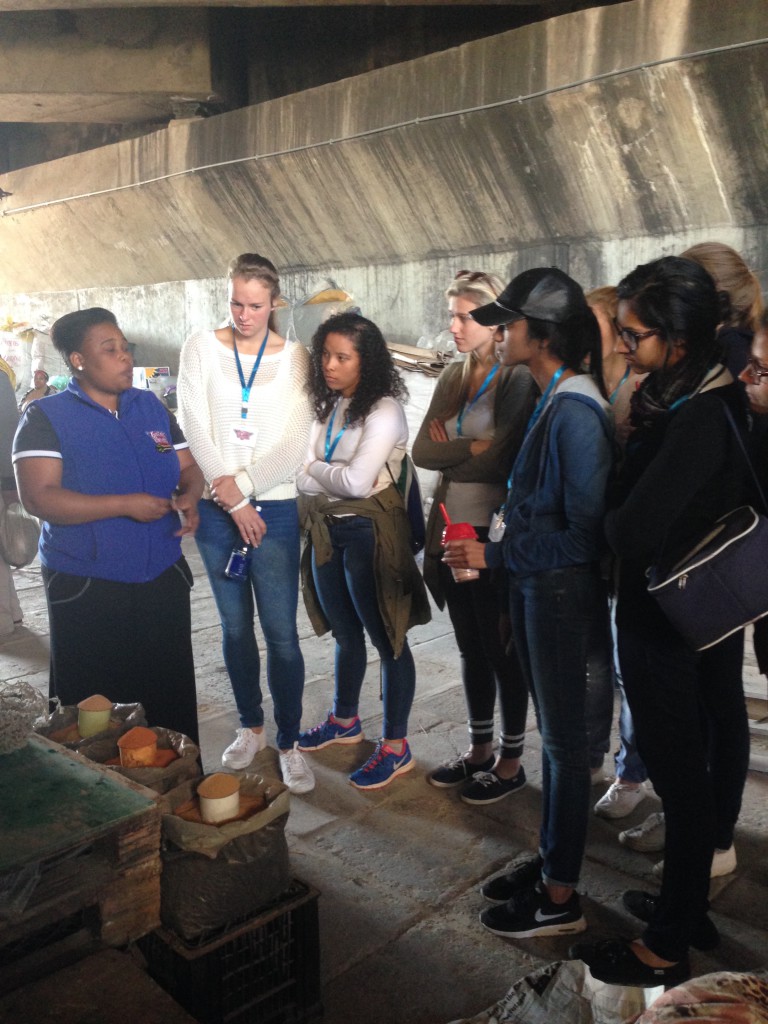 Background on the Markets of Warwick Tour Program

In 2009, in anticipation of the FIFA World Cup, the Durban city manager presented re-development plans of Warwick Junction, a large informal market in the heart of Durban. The redevelopment plan proposed a large formal retail shopping mall, which would have displaced the street traders, threatening their livelihoods and the single most authentic African market area in South Africa. In response, the informal workers protested the redevelopment plan and worked with AeT to develop a tour program to raise awareness about the value of their markets. 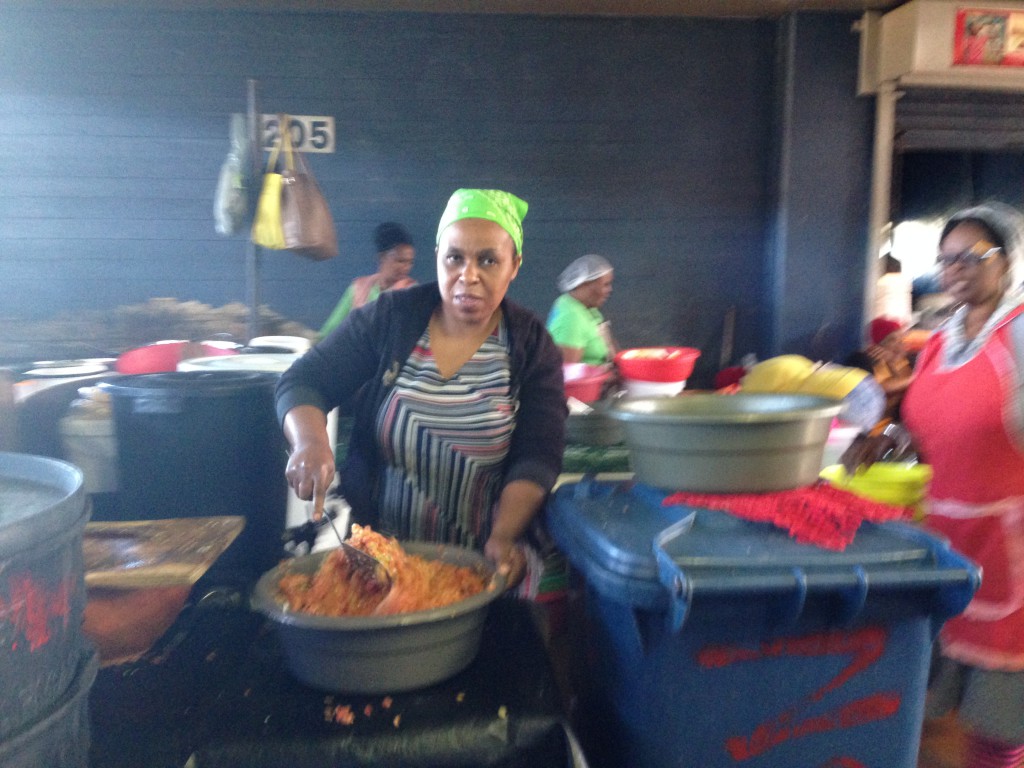 The Markets of Warwick tour program grew in popularity and complexity over the years encompassing both public tours and academic tours. Today, AeT is exploring how to grow the tour program from a pilot project to a sustainable social enterprise.

The Markets of Warwick have not always been seen as a tourist destination. The markets were originally created by and for the Indian community who worked as indentured servants. In the 1960s during the apartheid era, the government outlawed street trading in Durban seeking to control black economic activity through the designation of “white areas”. 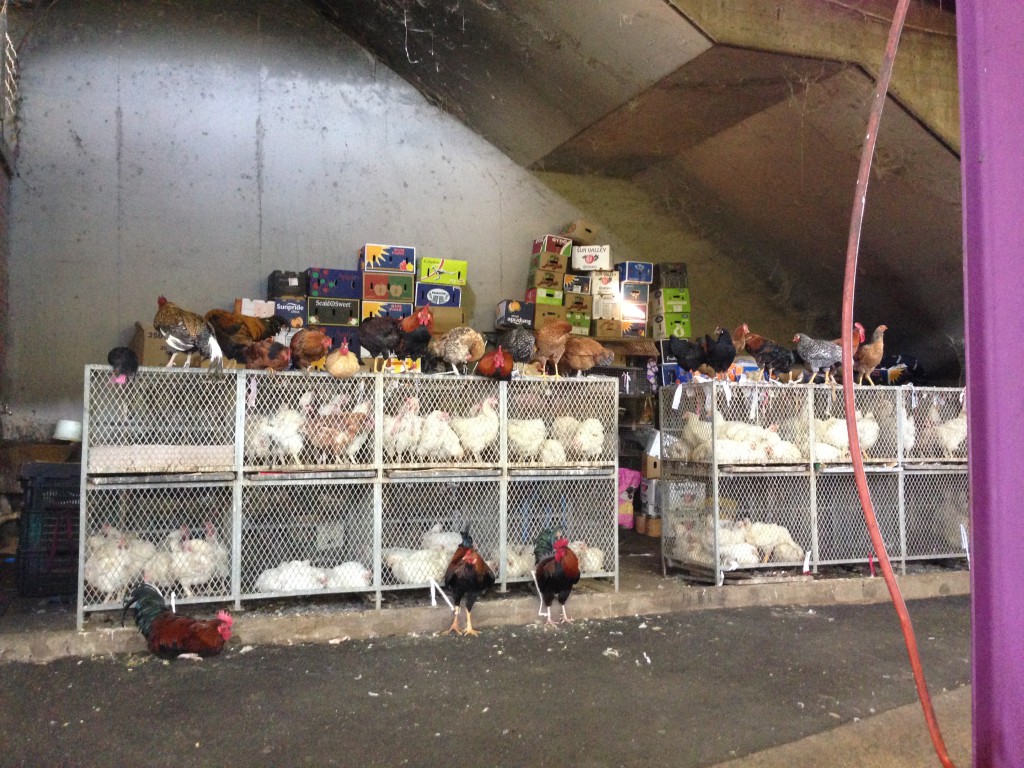 Above: Chickens at the Early Morning Market.

It wasn’t until the end of apartheid in the early 1990s that traders were recognized for their economic contributions to the local economy and the government undertook the Warwick Junction Urban Renewal Project to make infrastructure investments. Durban is the first international city to adopt a public policy on informal markets and others have followed their example.

The CREATE team used both qualitative and quantitative tools to better understanding the current status of the Markets of Warwick tour program. The project drew on our differing, yet complementary education and research skills. MIT students had more practice with structuring and performing presentations, while UKZN students were bilingual (isiZulu / English) and much more adept and able to understand the dynamics of the informal traders’ themselves. 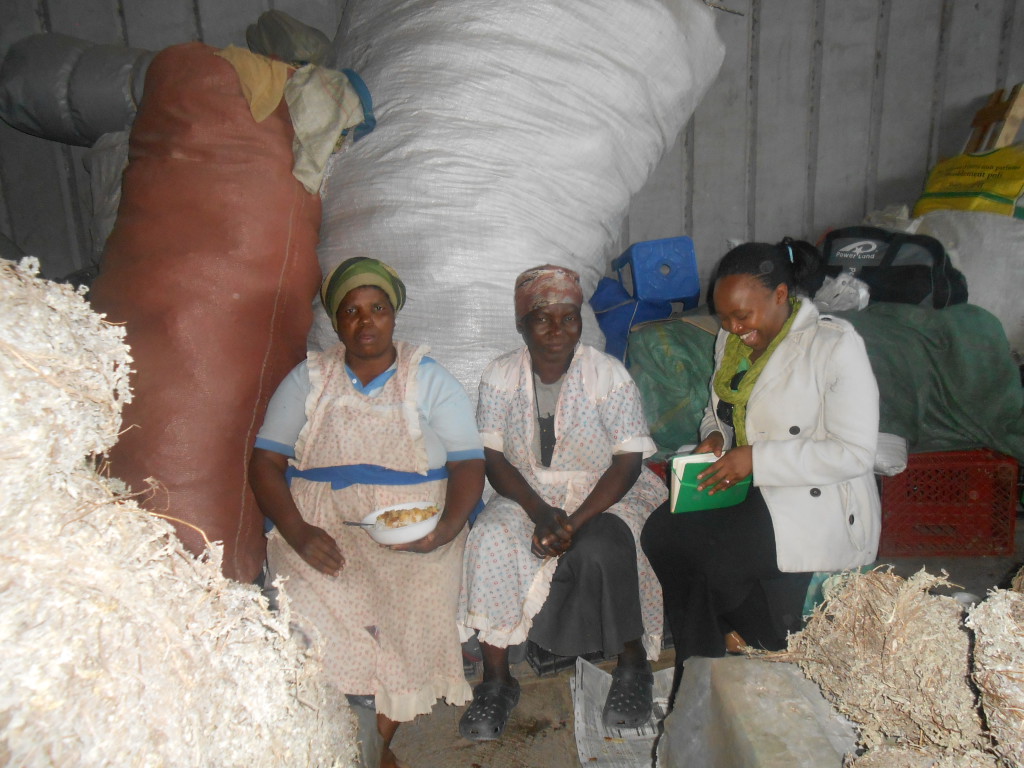 Above: Thandeka interviewing traders in the Lime & Impepho Market.

With help from AeT’s Director of Research Tasmi Quazi, we developed interview questionnaires for each audience: the informal traders, the Traders Against Crime members that assist with the tours, the trader tour guides, the AeT staff and others. The majority of the interviews were conducted in isiZulu and transcribed by our UKZN colleagues. In total, we completed 20 interviews and shadowed two secondary school tours. To plan for future financial sustainability, we completed a financial analysis of the program and also completed market research to identify competitors in the market offering a similar tour product. 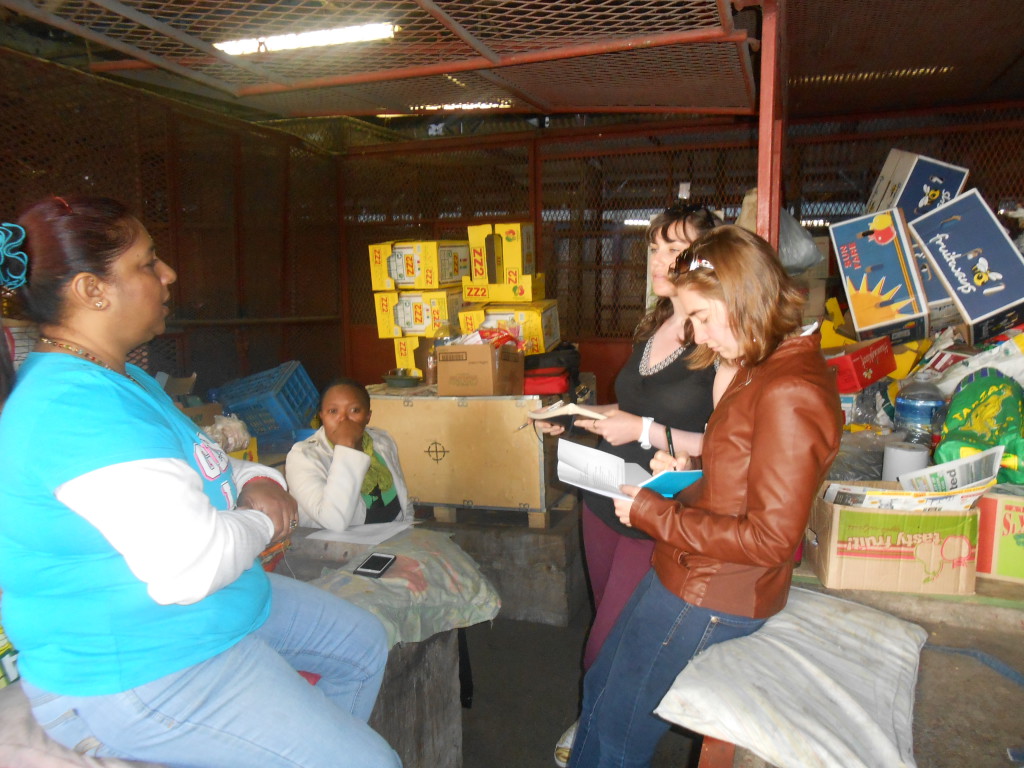 Above: Elise and Danya interviewing a produce trader in Early Morning Market.

Eight days of hard work in collaboration with the AeT team produced a Markets of Warwick tour program strategic development plan and a series of recommendations. The final product was well received and we hope it will be very useful.

With the first year of AeT’s Markets of Warwick tour program grant coming to a close, the outcomes produced from the CREATE research will enhance their ability to maximize the remaining two years of the grant to stimulate a new venture creation. Strategic planning for potential Community Based-Organization (CBO) entity models will result in both new income generation and new employment opportunities. The road map that the CREATE team prepared for AeT towards a new sustainable social enterprise proposed the following next steps:

On a personal level, we each developed a strong relationship with the space of the Market itself, which is generally looked down upon (as a result of misunderstanding and longstanding inequities, in our opinion) by many Durbanites, visitors, and to some degree the municipality itself. 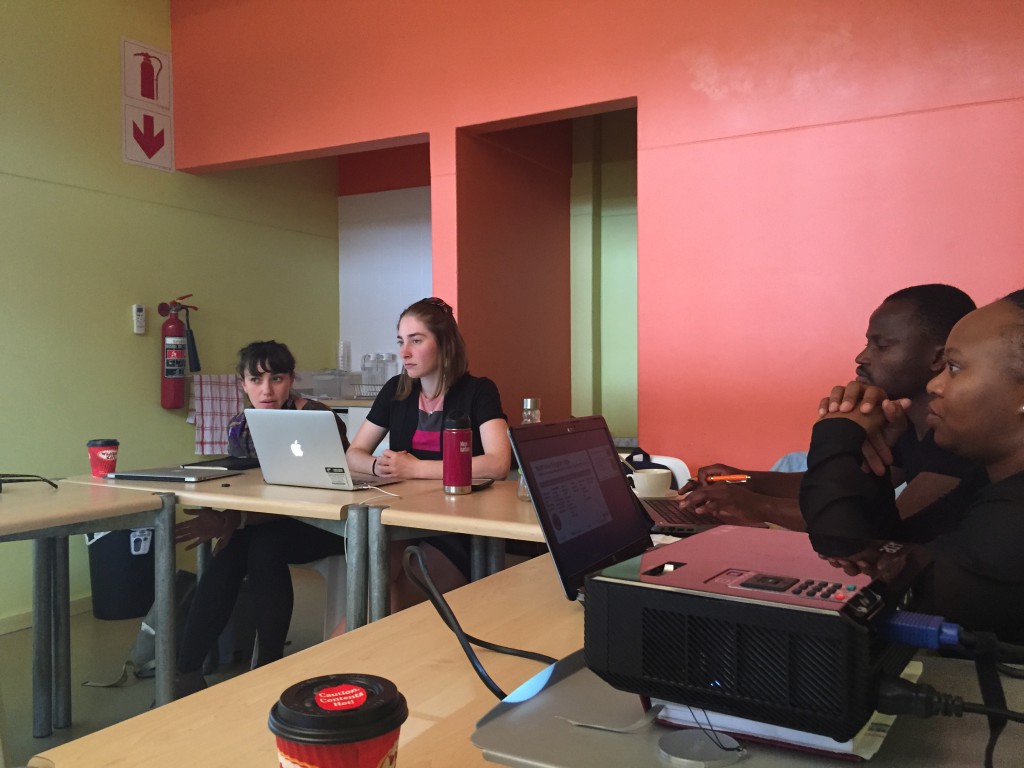 Presenting our final recommendations to the AeT staff.

Elise loved the Early Morning Market – its fresh produce, squawking chickens who greet you at the entrance, and the amazing history of the building. Danya loved the Berea Station market, where music sellers blast a mixture of traditional Zulu music and international pop and women sell beautiful, vibrantly colored pinafores.

We are grateful to the CREATE organizers at UKZN and MIT for giving us the opportunity to study together, and to AeT and the traders, tour guides, and others at the Markets themselves who so generously shared their thoughts and wisdom.