Menu
You are here: Home / News / Advocacy / Warwick Junction and AeT in the Spotlight: “Enabling Structures”... The International Architecture Exhibition Biennale is widely recognized as one of the most famous and prestigious artistic events in the world. This year, marking the 15th edition of the Exhibition entitled “Reporting from the Front”, is being held from May 28th to November 27th in Venice, Italy, and features participants from almost 40 countries.

The aim of the Biennale this year seeks to shift the architectural dialogue from aesthetic appeal to include supporting social needs and injustices to better achieve spatial development that improves people’s lives. By illustrating global issues such as inequity and access to resources and challenging audiences to engage with physical spaces as individuals and as communities, the Biennale hopes to draw crosslinks between people, places, and ideas.

It is fitting, then, that among these pieces is “The Transformation of the Warwick Triangle, Durban, South Africa” by designworkshop:sa and Asiye eTafuleni. The exhibit display offers a window into the challenges that have shaped the lives of South Africans, particularly in regards to the slow transformation of its downtown core in the post-apartheid era. It also showcases the contributions of the informal economy and traditional culture that was, for many years, ignored and excluded within the white dominated Durban city centre. 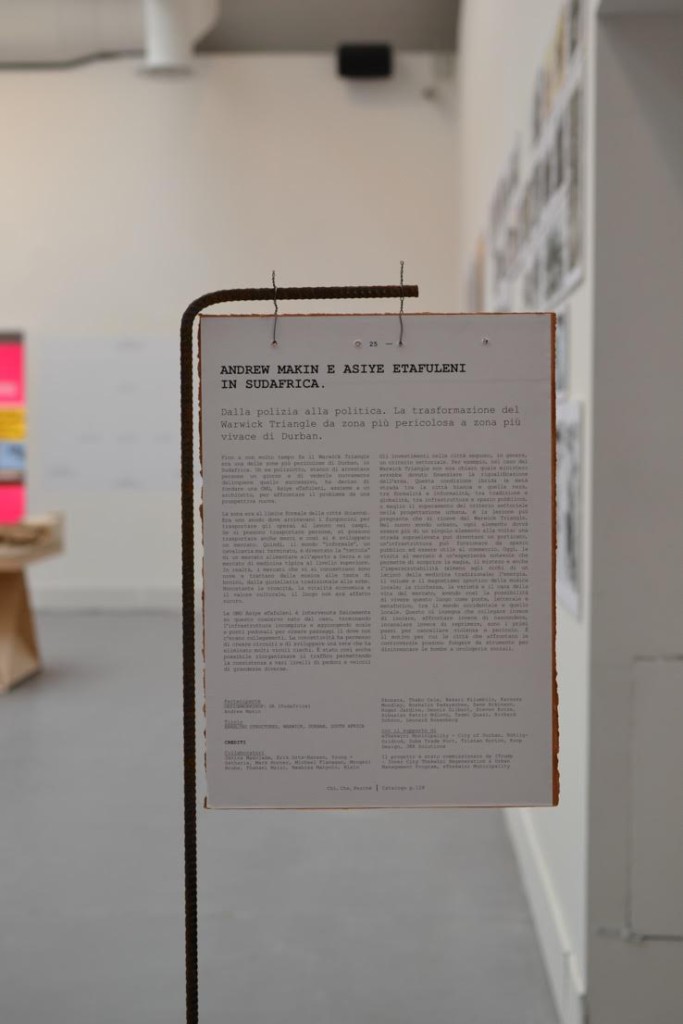 The inspiration for the exhibit came from the transformation of an incomplete, neglected city highway overpass into the foundational grounds for Warwick’s traditional medicine market initially completed in 1997. The regeneration of the urban space served to create a literal and figurative bridge between the urban and the rural, the informal and the formal, the poor and the rich, the traditional and the modern. These links between sectors had been sorely missing from the city for many years, and thus Warwick Junction today is a testament of the power of an urban transformation project to have a profound impact in integrating the rich vibrancy of traditional medicine, culture and livelihoods into the nexus of the formal economy and city.

The designworkshop:sa team worked closely with Asiye eTafuleni to showcase eight traders and their unique niches in the markets through a composition of photographs to understand the processes of their daily lives. Asiye eTafuleni, and particularly Patrick Ndlovu, played a critical role in identifying the individuals whose stories are captured by the exhibit piece and ensuring that the project was an authentic and genuine representation of those living and working in Warwick Junction. 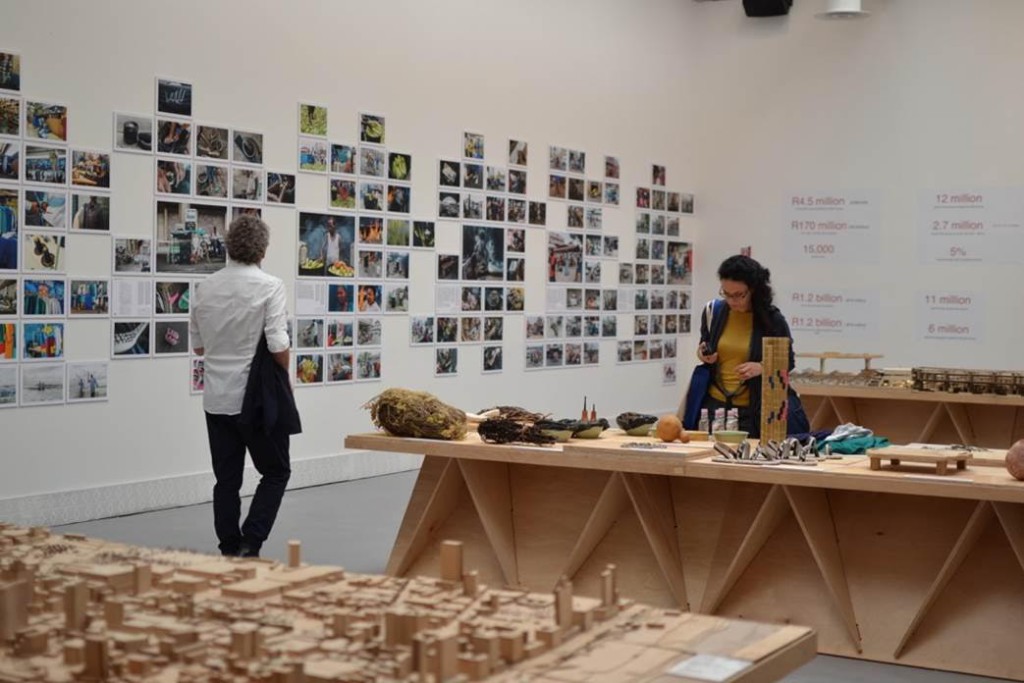 The exhibit also includes goods taken directly from the market to exemplify the diversity of products sold; balls of lime, religious attire, corn on the cob, calabashes, beadwork, sandals, and more. Interestingly, Mongezi Ncube, a former intern at Asiye eTafuleni and current designworkshop:sa employee, was responsible for constructing the 3D model of Warwick Junction that is prominently featured in the exhibit. 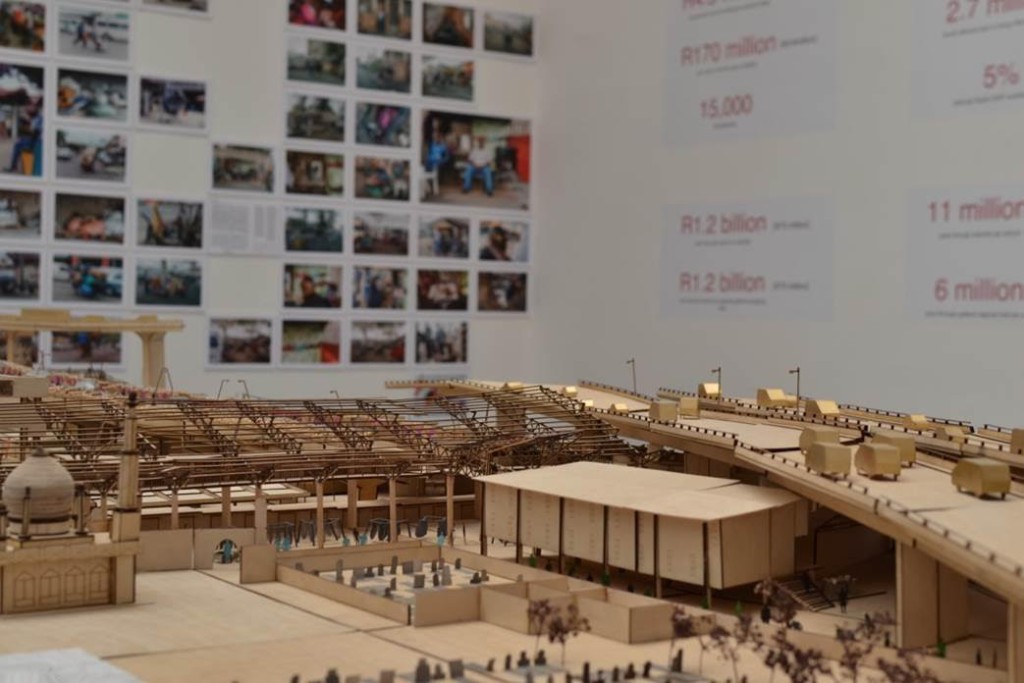 The reaches of this exhibit go far beyond simply the visually appealing. A recording plays throughout the exhibit, capturing the background hustle and bustle of the market – taxi horns, CD sellers blasting music, and threads of isiZulu being spoken can all be heard – and the cloying smell of impepho, a traditional natural incense, is also imparted into the space of the exhibit. 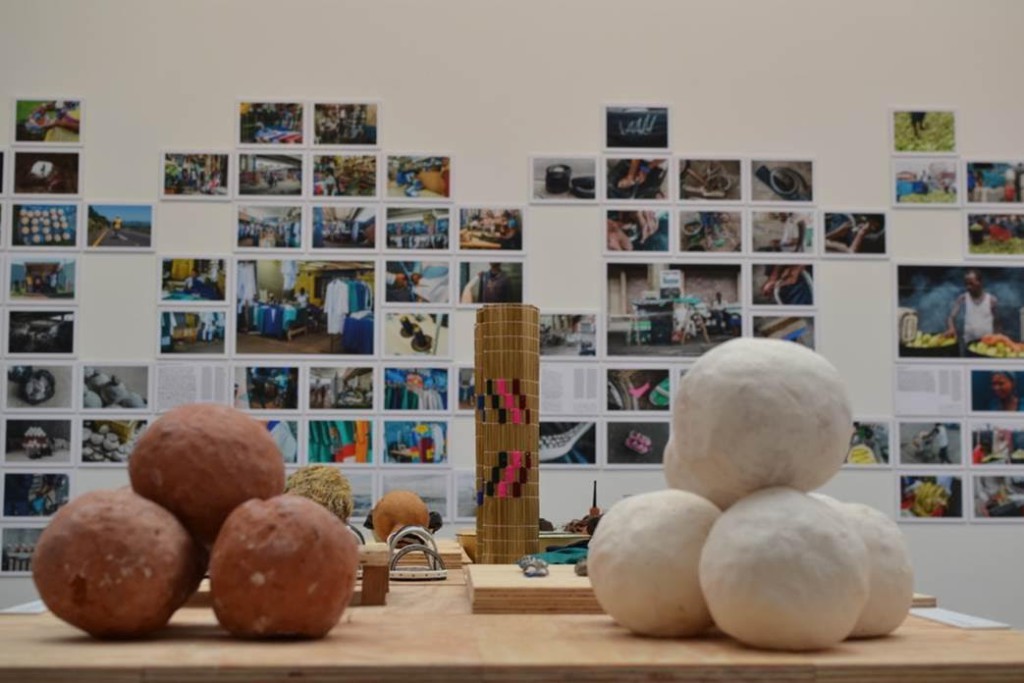 After the Biennale, the exhibit will be brought back to South Africa where both Asiye eTafuleni and the designworkshop:sa team  hope to find a more permanent display for the installation. As Cathy McDaniel, a member of designworkshop:sa, describes, “people need to see it here. People don’t know about Warwick Junction, and the exhibit opens their eyes to what goes on in an incredibly positive way”. This project demonstrates that by connecting the urban environment to support the informal economy, we can begin to attend to deeply embedded issues of social justice and inclusion, and ultimately achieve greater social cohesion.

For more information about the Biennale, you can visit the event website at http://www.labiennale.org/en/architecture/

The Biennale is already making news – and so is AeT! Check out this recent piece on the event and exhibits: http://enfr.blouinartinfo.com/news/story/1423437/biennale-applauded-for-shif
ting-focus-to-world-improvement

To hear more about the background and synthesis of the exhibit, you can listen to a video clip of Andrew Makin speaking at the Biennale here: https://www.youtube.com/watch?v=Kpj8XsoySJ0