Worldwide there is a tendency to assume that informal workers do not and will not properly maintain their workplaces and the infrastructure with which they are provided. The language that attends discussions of informal workplaces is peppered with the words “dirty,” “run down,” “broken,” and informal workers themselves often bear the burden of blame for this. Now a group of traders in Warwick Junction are beginning to challenge this assumption with their First Aid kits.

During the inception of the Markets of Warwick Tour Project, one of the goals was to: “Increase the skills and resources of the traders in the Warwick Junction vicinity to better assist the traders’ daily lives and working conditions”.  To be able to achieve this, in June 2010,  a First Aid training and awareness campaign was launched. By training traders in basic first aid, the Markets of Warwick Tours Project ensured that tourists would be able to be cared for should an accident occur. More importantly, traders were skilled and thus empowered within their individual markets and personal lives. Twenty five traders were selected by the Markets of Warwick Committee to participate in the programme. 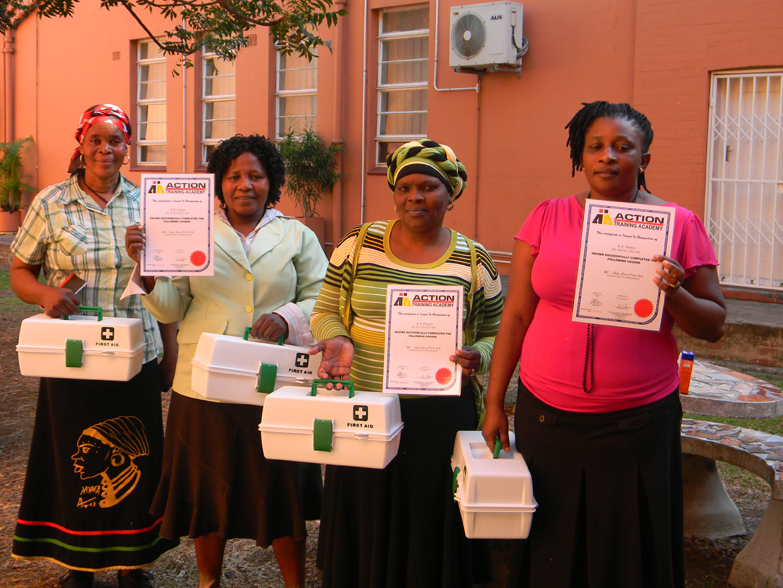 Traders from the Markets of Warwick Project that received First Aid training along with the kits and certification. Photo: Tasmi Quazi.

The “Stay Alive” Basic First Aid course was organized through the Action Training Academy, who presented a one day training session in isiZulu. At the graduation ceremony, a representative from each market in Warwick Junction was presented with a First Aid kit, sponsored by the SPAR Training Academy. Each first aider entrusted with keeping a First Aid kit, was asked to keep a log book which records the incidents that happened and what was used from the kit. Three years down the line, a follow up survey conducted by AeT and partner organization, WIEGO, shows that the traders have, on the whole, taken great pride in caring for their First Aid kits – often under difficult conditions.

The pride that Zakhele Khomo displays when he presents the First Aid kit which he keeps for the Berea Station Market is palpable. Khomo, who says that the First Aid training he received has “given [him] the confidence to see what he can do to help people who are injured,” has used the kit on number occasions. Khomo has kept a detailed log book in the First Aid kit in which he records the type of assistance he has given, as well as the equipment he has used. He has also added to the kit, buying an additional box of painkillers and antiseptic treatment for the benefit of the Market. Zakhele Khomo has done an exceptional job in maintaining the Berea Station First Aid kit.

The kit from the Victoria Street Market, which is stored indoors in a cupboard in the Market Office. Photo: Phumzile Xulu.

Similarly, traders in the other markets have also done well in maintaining their boxes. Even though some of them could not produce log sheets during interviews, they could account clearly the accidents that happened when they had to use their skill and the First Aid kit. The survey showed that out of the seven kits originally distributed in Warwick Markets, five had been very well maintained by the traders. In only one case, in the Brook Street Market, had the kit disappeared. This was due to theft from a trader’s storage space. In another case in the Bovine Head Cooks Market, the box had been destroyed by rain because it was being stored in the open.

The kit stored in the open at the Bovine Head Cook’s Market, which has been destroyed by rain and the elements. Photo: Phumzile Xulu.

The above stories points to a critical issue: the provision of appropriate storage for the kits. This would make a great difference to the traders who keep the First Aid kits. Other markets have also experienced storage problems, and have dealt with this by either keeping the kits in a locked room (as is the case with the Herb Market), or by keeping the kit in an office some distance from the market (as is the case with the Bead Sellers, who keep their kit in a locked office in Nicol Square). Neither of these solutions is ideal – the person who keeps the key for the room in the Herb Market is not always present, and the Beaders would much rather have their kit closer to them in an emergency. The provision of adequate storage for the kits will be the next design challenge for AeT!

What is also clear from the stories above is that traders do care about the equipment and infrastructure around them. In the two cases where the First Aid kits were lost and destroyed, it was a consequence of a lack of appropriate storage space, rather than active neglect by the traders.  No one enjoys working in a dirty, run down environment with no facilities, and informal workers are not an exception. If equipment and infrastructure is provided which meets their needs, they can and will look after it.