As an Imagine Durban Demonstration Project, we the implementing organisation, Asiye eTafuleni, were asked to showcase the Inner city Cardboard Recycling Project at the Sustainable City Exhibition held between 13-15th of August 2010 at the ICC Exhibition Centre. Asiye eTafuleni used this platform to showcase the processes of the project including the proposed trolleys, equipments and systems being evaluated at the testing phase. But also to enable the cardboard recyclers to showcase themselves as they assisted with manning of the stall. Here, they were given the opportunity to share the details of their working lives and personal stories to the broader public. 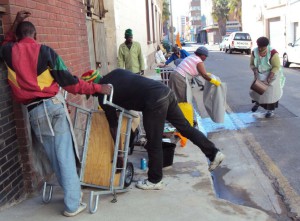 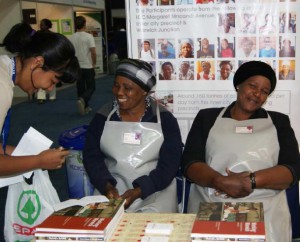 During the Exhibition, altogether 11 Cardboard Recyclers manned the stalls on a rotation basis, each shift comprising of a recycler from two different locations, Palmer and Pine Street. This was done to encourage information sharing and networking with fellow recyclers from a different location, partaking in the same process of the project. There was immense interest received from the public as they engaged the Cardboard Recyclers and Asiye eTafuleni staff pictured here. These included ordinary citizens, local government officials, generators of waste, professionals from the Recycling sector, NGO officials, and urban design and planning practitioners.

The feedback received from some of the participating recyclers 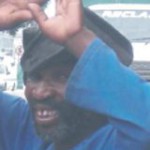 ‘It was good exposure to mix with important people, for people to see how we earn a living and value our jobs so that we are not taken for granted as we contribute to keeping the city clean. It was a real outing because normally we are not allowed inside the Exhibition Centre!’ Afrika Ntuli 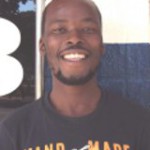 ‘It was an eye opener to see how other people are earning a living from different recyclables. I was able to make an earning of R180 from the cardboard left behind from the Sustainable City Exhibition which I was given by the people there. I realised we got good exposure because of the newspaper article and because there was a photograph of me, people that know me recognised me!’ Sandile Mncwabe 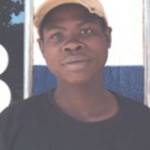 ‘It was good for networking because we got new contacts of people that will give us their paper and cardboard. It was good to see the images in the display because we didn’t know what Asiye eTafuleni was going to do with the photos, but the display told our story. Now people seeing us with the trolleys and aprons will not think that we are just mad.’ Thokozani Hadebe 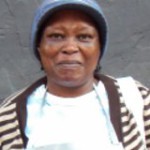 ‘I learnt a lot through talking and explaining to the people what we do and how we do it and how Asiye eTafuleni have been helping us. I was not shy because I was proud to share the information. My daughter visited me at the stand and she was so happy she started crying. She was impressed that I was talking to different races of people, and told all our neighbours at home. She even brought a friend to the stand to show her everything.’ Maria Vilakazi 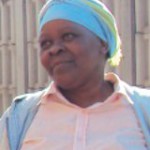 ‘You made us feel very proud about what we are doing and we are proud of the project because it is improving our lives. And we were so grateful for being compensated for the time we were asked to man the stall at the Exhibition! Also because we were speaking to the Recyclers from the other place, we found out from them at the Exhibition that we were being paid less for our cardboard. We confronted our buyer and are now being paid the same as them at the other place!’ Ntombini Makhoba & Delisile Zondi 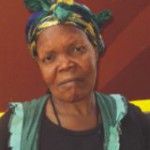 ‘The setup and displays were amazing. It was good also because we got to mix with fellow recyclers from another place and exchange ideas and some good and bad stories, like the exploitation we sometimes face.’ Ngenzeni Gumede

The full report and photo’s from the [download id=”2″].