“From the brink of hundreds of informal traders being threatened with displacement to the thriving, collective governance of today, Warwick Junction has carved a unique path to integrating large, informal markets into a modern city.”

Dr. Frannie Léautier, a Juror of the 2019 WRI Ross Prize and the Chief Operating Officer of the Eastern and Southern Africa Trade and Development Bank.

Asiye eTafuleni (AeT) was nominated as one of the top 5 finalists for the 2019 WRI Ross Prize for Cities, a global competition in pursuit of “transformative projects that effect positive change through reshaping form and function of urban economies, environments and communities”. AeT were selected alongside 4 other impressive and diverse urban interventions with a key intention of the competition being for WRI to understand and learn from each of the finalists.

Consequently, in January 2019 WRI representatives, Anne Maassen and Daniely Votto, visited Durban to hear the story of urban transformation from AeT and the Warwick Junction community first hand. In a whirlwind two and a half days they immersed themselves in Warwick Junction and engaged with various stakeholders.

“The story of how Warwick Junction bucked the global trend of replacing informal markets with malls and shopping centers is a testament to the compromise, conflict and resourcefulness of a small set of actors – informal workers, local officials and the small non-profit Asiye eTafuleni (Zulu for “bring it to the table”). It is a story of social healing and the enduring contradictions of a modern African city.”

The final evaluation was up to a highly qualified and prestigious panel of judges, who selected one winner to receive the inaugural $250,000 prize. Richard Dobson and Patric Ndlovu, co-founders of AeT, were invited to attend WRI’s Courage to Lead dinner on the 10th April 2019, where the winner was announced.

The winning finalist was SARSAI (School Area Road Safety Assessments and Improvements) who are based in Dar es Salam, Tanzania. This achievement recognizes the incredible work SARSAI is doing to create safer cities “by designing from the point of view of the child pedestrian”- Ayikai Charlotte Poswayo, their Program Director.

This opportunity spotlighted Warwick Junction on international platforms, however, it also allowed AeT to reflect on the significant work they have done over the past 10 years to support informal workers and affirmed their facilitative role in the progressive urban transformation of Warwick Junction towards a more inclusive city.

“Continuing with the theme of inclusion, the non-profit AeT is helping co-create a more equal city in the sprawling markets of Warwick Junction in Durban, South Africa.”

Design with the other 90% 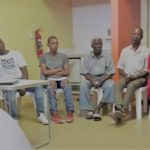