You are here: Home / News / Advocacy / Impacts of Coronavirus: An uncertain future for informal workers

The coronavirus (COVID-19) has made its way swiftly to all corners of the world and into all communities, but this pandemic disproportionately affects the most vulnerable members of society, in both health and economic terms (the latter will be the focus of this blog-post). Durban’s inner-city informal workers are some of most vulnerable people at the best of times, surviving off meagre wages and often treated with hostility and contempt by the municipality. This pandemic, and the lockdown which came into effect on the 27th of March 2020 in order to try ‘flatten the curve’, are heightening the already very precarious nature of their livelihoods.

The largest concentration of informal workers in central Durban can be found in Warwick Junction. There are a number of different types of informal workers who enable the functioning of Warwick Junction as a transport hub and as a market. Approximately 8,000 informal workers operate within 9 interconnected markets of Warwick Junction; traders sell food, clothes, electronics, traditional medicine and other goods; barrow-operators assist these traders with the transportation of their goods and equipment; informal recyclers collect and sell recyclable materials; minibus-taxi drivers uphold an informal transport system which converges in Warwick Junction and which the majority of the city’s residents make use of, and taxi washers keep these taxi’s spotless. Throughout the entire inner-city there are approximately 21,000 informal workers. South Africa’s nationwide lockdown appears to be slowing the spread of the coronavirus but the economic impacts are going to be far-reaching. While many formal businesses, particularly smaller ones, will also be hard-hit, the implications of the lockdown for informal workers are likely to be more devastating and harder to recover from. This blog-post will outline a number of challenges that are being faced by informal workers during this time.

For the first few days of the lockdown all informal trade was prohibited, even though many inner-city traders sell food, which is an essential item. Food traders who had bought large volumes of stock before the lockdown was announced, were forced to throw food away or give it away for free. It was later announced that food traders would be allowed to work, but this was followed by much confusion. It was unclear that selling of cooked food would not be allowed and there are cases of stock being bought from suppliers or from farmers but then not being able to be sold on the street. Even for fruit and vegetable sellers, the legislative permission to trade does not allow them to simply return to work as normal. Firstly, they are required to obtain special licenses and a prerequisite to obtaining this license is that they have valid permits, which excludes many traders. Secondly, even those who have been allocated permits are facing harassment by police on the streets. A story has emerged of a trader being arrested and thrown in jail for breaking the lockdown rules, even though she had acquired a license to trade the previous day. Thirdly, taxi services are limited (heavily affecting the income of drivers and taxi washers) which means the traders have difficulty getting from their homes to the city to trade or to the bulk market to buy their stock. Fourthly, barrow-operators who are vital to the traders in terms of delivering their stock and setting up their trading stalls, are not allowed to work. Fifthly, the lack of protective equipment, running water and soap, means that traders who are working are putting themselves and their customers at risk of contracting coronavirus, which is a frightening prospect. Finally, the fact that the majority of Durban’s residents are not working during the lockdown and strict limitations have been placed on public transport operations, means that the number of commuters passing through Warwick Junction each day – and therefore the number of potential customers for inner-city traders – has drastically diminished.

All the other traders selling non-essential items (as classified by the lockdown regulations) and the non-trading informal workers, do not have the option of working. There are a large number of traders who make church outfits and traditional ceremonial attire and Easter is usually one of their most profitable times of the year. The lockdown has meant that all gatherings are prohibited, including those of a religious nature and these clothing manufacturers took out loans in order to produce these outfits which they were then unable to sell due to the fact that Easter took place over the lockdown period. It will be impossible for them to make a return on these investments that they have made in their businesses and there is no certainty about when/if they will be able to repay their debts.

Formal waste collection is considered an essential service during the lockdown but informal recyclers were not afforded this title and are prohibited from salvaging waste in public places. A few months ago, the price per kilogram for recyclable materials dropped and the (mainly female) recyclers had to adjust to their decline in profit. Now, their already very minimal income has gone down to zero.

It is imperative that informal workers are compensated for their lack of income during this time but there is a lack of funding being specifically allocated to assist them. Formal businesses, big and small, are able to take out interest free loans which may enable their survival but for informal workers, the only option of a loan would be from a ‘loan-shark’ which means high interest rates and risks to personal safety. The state has acknowledged that there is a need to support the informal sector and announced that a safety net would be developed, however details about how, when, by whom, and what amount, have been omitted and we are now over 3 weeks into lockdown and no support has been made available. Furthermore, in places like Warwick Junction, community networks are usually strong; traders offer goods on credit and informal workers assist each other during difficult times. Now, that network has been decimated. This leaves informal workers entirely uncertain about the future of their businesses and their ability to survive the coming months.

[Feature image: The effect of lockdown on the informal economy reflected through images of the Brook Street Market, which is usually vibrant throughout the day] 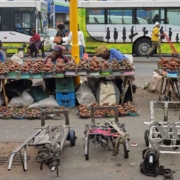 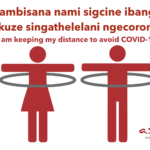 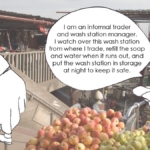