In celebration of World Architecture Day on 15 November 2011, Architects’ Collective hosted the South African Informal City (SAIC) exhibition and seminar, at the Bus Factory in Newtown, Johannesburg. The exhibition was on view from 11 November till 11 December 2011.

The initiative was created to showcase South Africa’s most relevant and innovative projects that explore informality in the modern metropolis. This was aimed at sharing information and positive action around the critical issues of informality and urban development amongst policy makers, practitioners and academics involved in this realm.

Moreover, it was initiated as an effort to address the lack of recognition, discourse and debate around the role of urban design in poverty alleviation. For more information about the motivation behind the project read an [download id=”35″] in the January/February 2012 edition of the Journal of the South African Institute of Architects, Architecture South Africa.

The showcased work explored the themes: Inner City Informality; In Situ Upgrading; Catalytic Projects; Un-built Projects; and Backyard Interventions. Under the theme Inner City Informality, the Herb Market and Brook Street Markets were featured, courtesy of Andrew Makin Architect and Architects Collaborative respectively. In addition, AeT has facilitated the provision of photographic images of the informal economy of Warwick Junction from the book ‘Working in Warwick’ and was an invited speaker at the Seminar. The SAIC exhibition is the fifth exhibition in which the ‘Working in Warwick’ photography collection has been featured, see here. To view more images of the SAIC exhibition, click here.

The one-day programme for the seminar covered four themes Place; Movement; Opportunity and Engagement. During the opening speech, Mr Sithole from the South African Cities Network said that “…Informality is negated and ostracised, not seen as part of the city, it has become about ‘dealing’ with it – instead of managing, supporting and embracing it…” He added that the key challenge is to reconfigure our cities and the meaning of informality so that it is embraced. AeT’s Richard Dobson spoke under the theme of Movement and based on the experiences gained in the area of urban design implementation with informal workers, he highlighted FIVE indicative lessons:

1) Location: Informal workers are often pioneer feasibility writers because they are trying to impress themselves and their needs in viable places. (This was echoed by Edmund Elias, the Chairperson of the South African Traders Retail Alliance who emphasised that informal traders have a significant contribution to make to urban renewal initiatives. He elaborated that in planning exercises, the urban logic of informal traders are not recognised and in fact undermined and prejudiced by officials and development practitioners.)

2) Healing: South African cities have not realised that they have been deprived of an integrated presence of its people. Although we may have a rainbow nation, our cities need to reflect this.

3) Carrying capacity: In most of these areas, communities are making sophisticated calls regarding densities in public spaces, product mix and transactional methods.  These often result in a dynamic threshold being reached which suggest that we should become more courageous and let some of these thresholds develop more organically to see how they play out.

5) Process: The Durban Council adopted an area-based approach to the regeneration programme as a multi-disciplinary team that did the primary interfacing. However, it became undergirded by substantial stakeholder commitment and participation in a broader participatory effort. This was echoed by audience members that pointed the need for integrated development that is cross-sectoral involving economic development, tourism and transportation – along with housing to holistically support informality.

For the summary of the day-long seminar, download the [download id=”36″]. In conclusion, in light of the development vacuum of research and practice within the realm of informality, the exhibition and seminar was pioneering for its focus. What was even more encouraging was the consensus that informality is a permanent urban phenomenon which should not be viewed as a problem, but as part of the solution to strategizing integrated responses; encompassing research, urban design and social engagement. This echoes AeT’s organisational practice which brings both technical expertise and social facilitation skills in order to work with urban informal workers in co-developing their working environments, and which is inclusive of relevant city departments and practitioners.

“Waste Not Want Not”

The Markets of Warwick Tour features on the Saturday Independent 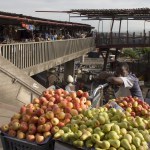