On the weekend of the 21-22 May 2011, Warwick Junction hosted an energetic film crew representing the Smithsonian Channel for the TV series production of ‘Design with the other 90%’. This is a complimentary project of the exhibition under the same banner to be held at the United Nations Visitors Centre in New York later this year between October 2011 and January 2011. See post from 19 April 2011. The 2 day intensive shoot captured interviews on film, including photo shoots on location, covering every nook and cranny of Warwick Junction, its community of traders and the people integral in shaping this urban environment. 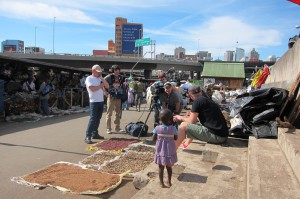 Architect Andrew Makin being interviewed at the Herb Market

The shoot was completed late into Sunday evening; in an effort to optimize every bit of day light available and to ensure a meticulous oral and visual record. For all involved, it was recognized that the occasion provided an invaluable opportunity for reflection; both on the past achievements, and also on the relevance of the work in relation to the exhibition theme – ‘Design with the other 90%’.

Investing in the Future & Drivers of Change Civil Society Award 2011