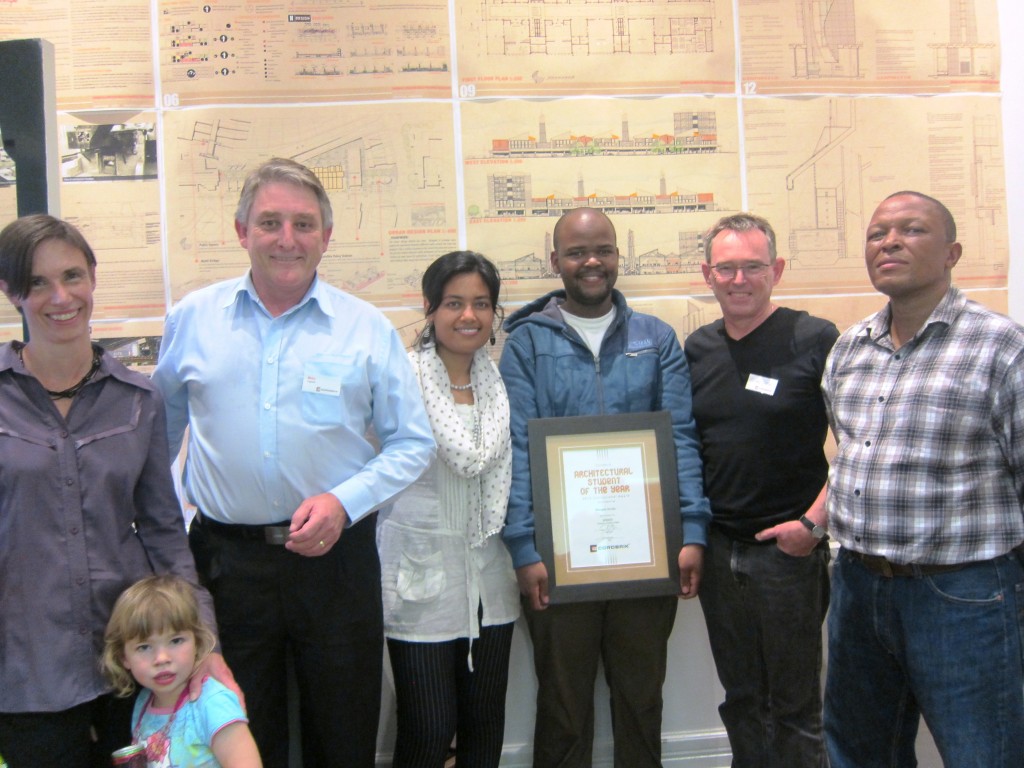 AeT intern Mongezi Ncube from University of KwaZulu-Natal was selected as the regional winner of the 2013 “Corobrik Architectural Student of the Year”. This is the successive year that an AeT intern has won this prestigious student competition, the 2012 winner being, Dennis-Lee Stols.

Mongezi’s thesis explored urban informality as a generator for meaningful built form through his proposal for a multipurpose trade hub in Warwick Junction. The proposed building is to support informal traders that need a productive space to facilitate their work. The central challenge he poses through his design is “Why not have the courage, where practical, to let people shape their own environment?”

A skillful 3-D sketch by Mongezi of the Multi-purpose Trade Hub.

To test this challenge, Mongezi approached AeT for the opportunity to work directly with informal traders in order to better understand their infrastructure needs.  Mealie cooks, informal recyclers and taxi mechanics were identified as the “clients” for his proposed facility.

With regards to learnings gained through AeT, he says:

“A few weeks before we had to finalise our thesis topics, AeT delivered a lecture about DESIGNING WITH INFORMAL WORKERS. It was at that moment I realized that I had found an issue that dealt with the immediate needs of the community. During this lecture, AeT showed us the various challenges that informal traders face in their built environment. I decided to take on this challenge at that moment and actively participate in this discussion.

…The time I spent with AeT made me realise that many people depend on the informal economy and it is an integral part of our economy that is often overlooked. It is made up of some of the most resourceful people I’ve ever come across…With all the challenges that our country faces this is something that needs to be celebrated more than it is now.”

With regards to his perceptions of, and aspirations within, the built-environment sector, he says:

Mongezi’s rendered drawings and model of the Multi-purpose Trade Hub.

“My time with AeT has revealed negative aspects of built environment responses to the informal economy. There has been some significant work in this field but most of it has barely scratched the surface. There is still more questions than answers. It’s almost impossible to find any substantial documented material that has tried to make this connection.

I think we as architects (future architect in my case) have forgotten about the ordinary person on the street. We are so busy trying to outdo each other that we seem to be forgetting who we are designing for. If my career could make an impact in my field, it would be to make architects and urban design professionals remember what are we doing and who we should be doing it for.

I made a promise to myself in first year that I would never forget where I came from and the people that made me, in whatever I do in my architectural career. I would really love to do more community projects and actively participate with them to make a meaningful contribution to our society.”

Mongezi unpacks the notion of “meaningful” built-form explored through his design:

“The aim of the design was to provide a built-form where the people have the ability to define its configuration. This was done through consultation with all of the relevant stakeholders, because community participation empowers people within a specific context to influence the way they want the built form to be configured.

This also has the benefit of making sure the built form will be of some value and meaning for informal workers since they are given the opportunity to apply the knowledge they themselves have developed.”

One of the most innovative aspects of Mongezi’s design, a community chimney operation which coverts waste collected from the inner-city area into energy for the Trade Hub.

On being asked how his award was received by his family, he says:

“At times it felt like we were all studying architecture. They would listen to me rambling on about design concepts and theories, and they would try to engage me wherever they could. It was during these ‘conversations’ that I came up with my best ideas.

When it eventually came to an end a few weeks ago, their facial expressions said it all. My parents (Sibusiso and Nkosingiphile Ncube) had that look that every child strives to get from their parents…a sense of pride… and it felt as though we achieved something they couldn’t achieve in their time, through me.”

Mongezi with his family, that have been a key source of support towards this achievement. Photo: Tasmi Quazi.

Mongezi’s reflection of his award being achieved together is an affirmation of AeT’s approach, that inclusive urban design and planning is a collaborative process.  Moreover, it implies that the greater the levels of collaboration, the greater the meaning that the resultant built-form holds for informal workers.

Reflections of the Reformed and our Future

Investing in the Future & Drivers of Change Civil Society Award 2011