At the 2012 AfriSam-SAIA awards ceremony for Sustainable Architecture held in Johannesburg on the 3rd of October, Asiye eTafuleni’s (AeT) Inner-city Cardboard Recycling Project was commended for contributing to sustainable architecture in South Africa.  Being recognised at a national level within the architectural fraternity, provides a greater impetus in highlighting the role of informal recycling in stimulating sustainable urban development, through the creative inclusion of this livelihood activity into the urban fabric.

Amongst four other projects that received awards this year, what was particularly significant and unique is that AeT’s Project is the only one that is not a building.   This can be attributed to AfriSam and SAIA’s recognition that sustainable architecture can involve more than the creation of buildings, demonstrated through the category, “Work of Social Significance”, which AeT’s Project fell under.

Elated recyclers with AeT staff and the Sustainable Architecture Award.

For AeT, urban design and planning is a process and means towards the building of communities, and a catalyst for transformation within multiple and co-dependent disciplines such as community development, planning, environmental science and economic development.  Therefore, the broad and holistic framework for assessing sustainability found resonance with AeT’s own approach.

The jury’s evaluation process involved country-wide visits to all the short-listed submissions.  AeT’s response to the interview was to involve the entire project team, i.e. the informal recyclers, Bright Site social work students and the Priority Zone facilities management company that have been actively supporting the Project.  This included a presentation, workplace exposure and critical debate which ensued between the judges and AeT staff around the sustainability of the Project, and which even extended to considering the sustainability of informality and the organisation itself. This was a highly stimulating discussion which continues to affirm the way AeT approaches sustainability.

Subsequent to receiving the commendation, the comment below is inspirational for AeT in that it recognises the work ethic and energy that typically goes behind the implementation of this and other similar Projects undertaken. It is what the judges had to say regarding their motivation for selecting AeT’s Project for commendation;

Finding an architectural intervention opportunity in the everyday lives of those who work on the margins of our rapidly growing cities calls for an immense sense of empathy and a genuinely open-mind ready to learn and be sensitively guided in the process by those one seeks to serve.  In the cardboard recycling project in eThekwini, AeT opened itself to exactly such a challenge.

(…) Starting in 2009 with embedded action-research as their primary strategy, the organisation has managed to roll-out both a physical as well as social-intervention programme which has benefited cardboard recyclers with trolleys, overalls, safety gloves, collection-points, and the soft-interventions such as accessing IDs and savings accounts.

(…) Networking of the opportunity to formal urban regeneration programmes of the city, academic research programmes of universities and global funding networks has started to yield deeper relevance and dignity for the workers in this fringe activity of our cities while at the same time delivering invaluable technological and research-data lessons for the architects, the municipality and broader network of collaborating partners.

The recyclers participating in the Project were jubilant on hearing that they had won this award and on being asked what it meant for them, most of them mentioned aspects relating to a greater sense of pride and legitimacy that it has brought. As the male leader of the recycling committee, Afrika Ntuli said, “…We’ve become famous, our incomes have tripled and it feels like we have been brought out of a dark dungeon. Asiye eTafuleni and its partners like Priority Zone have been like a shield for us, as we are no longer harassed by the police and we no longer need to sleep by our cardboard to prevent them being confiscated.” He brazenly added, “This award gives us bragging rights and proves why we are the best…

Elated recyclers on hearing the news of winning the Sustainable Architecture award.

Female leader of the committee, Maria Vilakazi supported Ntuli’s sentiments by adding that, “…We’re the best because we are committed, we respect each other and we are proud of the work we do (…) Asiye eTafuleni’s involvement has given us a greater sense of self-esteem and we are no longer ashamed of the work we do”.

Another exciting outcome of these awards was the making of a short documentary which follows one of the recyclers, Victoria Bubu, on a typical working day. On being asked how she felt about appearing on the video and winning the award, she had this to say: “I don’t know what to say to express my joy, we are really moving forward!”, excitedly chanting “Phambili Asiye eTafuleni, phambili!” (Figuratively translating as “we’re moving forward” in isiZulu).

For more information about the AfriSam-SAIA Awards for Sustainable Architecture, click on the following links: 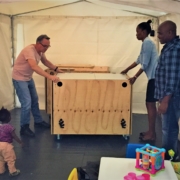 AeT has broadened their scope of work to respond to evolving urban needs; childcare

Calls for Inclusivity at the World Urban Forum

The view from the streets
6 replies