You are here: Home / News / Uncategorized / Markets of Warwick in the Cosmopolitan Magazine!

The Markets of Warwick tours featured in the Cosmopolitan Magazine in its December 2011 issue on page 21, featured under “Cosmo Hot Stuff’ – What’s up, What’s new and What’s unmissable this month.”  In this feature is a list of 20 items listed that range from new music to ‘things to do’ and items to buy.  Here, the Markets of Warwick is listed as number 7!

The write-up on the Markets of Warwick describes the markets as a community lead project. In addition it emphasizes the fun and novel experience of the tour of “Durban’s little known markets”. This goes to show the extent to which perceptions of the area have changed as a result of the Markets of Warwick project, as it is now perceived as safe and reliable enough to feature and be promoted in one of the most popular women’s glossy magazines in South Africa.

The Markets of Warwick tours is also one of the few items listed under “to do” in Durban highlighting the increased recognition as a Durban tourism item.

Another interesting observation is the extent to which the project name, the ‘Markets of Warwick’ has caught on and successfully established itself as the brand for the area, and in doing so brought about a new image to the area as per the founding objectives of the community project.  For instance, this Cosmopolitan review was not initiated by Asiye eTafuleni, but independently generated which highlights that the project is standing on its own.

Design with the other 90%

The view from the streets

The Protection of Personal Information Act came into effect on 1 July 2021. AeT is committed to respecting and protecting your right to privacy relating to any interactions on our website. View AeT’s website disclaimer here. For Queries, Assistance and Complaints , please contact Sithulisile Moyo on email: thuli@aet.org.za 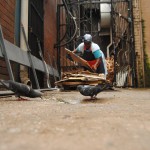