You are here: Home / News / Uncategorized / Redefining “Clean-up” of informality

After a scan of the past month’s news coverage, it is evident that informal workers across various metropolitan cities in South Africa have been experiencing extreme harassment. Some of these have occurred under the guise of inner-city “clean-up” operations which on paper and rhetoric speak of development aims in relation to informal workers, but in reality, manifest as evictions and punitive enforcement against informal workers.

In Johannesburg for instance, informal workers have been cleared out of specific areas and the city government has been engaged in a protracted process of rescreening informal worker permits, known as the ‘Mayoral Clean Sweep’ initiative which began in October 2013. Consequently, a number of the legitimate informal workers are intending to take the City to court for loss of income. Tanya Zack, a consultant who contributed to the City of Johannesburg’s Inner-city Roadmap project, wrote an open letter challenging the City’s “clean-up” operations:

“The Roadmap was categorical that CLEANING was not about removal of traders (…) The City needs to be accountable against its own policy and the actions of trader removal, outside of any economic or spatial plan; these are entirely out of sync with the City’s policy intentions or statements (…) the City needs to explain the action of removing stands as well as of extremely rough treatment of legitimate traders and ordinary residents and workers within the inner city.”

Similarly in Durban, not only is there evidence of systematic enforcement against informal workers, the City is also currently reviewing its street trading bylaws. Notwithstanding the fact that the bylaws begin by expressing a developmental intent, the punitive measures are more severe than the former bylaws. Furthermore, a legitimate trader has brought an urgent application to the Durban High Court for the return of his confiscated goods, and ultimately to raise the constitutional legality of confiscations.

These incidents show that city governments are in crisis with regards to dealing with the urban management of informality. Their adhoc responses range from draconian “clean-up” operations to revising bylaws with increased sanctions. The rhetoric of “clean-up” is consequently becoming notoriously associated with evictions and harassment of informal workers, and is aggravating more tensions between urban regulators and informal workers. This approach is not sustainable for South Africa’s urban future which is experiencing a flourishing informal economy, like elsewhere in the world.

It is therefore evident that city government responses are skewed towards enforcement as the first recourse. However, the first recourse to dealing with urban management challenges should in fact be inclusive and process-driven, with meaningful engagement of all the relevant stakeholders.

Asiye eTafuleni advocates an alternate vision to what “clean-up” means and how it can be achieved. It means the provision of creative urban design and infrastructure which enables informal workers to work from safe, secure and clean urban environments. It also means collaborating with informal workers to cooperatively tackle urban management challenges related to cleanliness, security and waste management.

The end result of embracing inclusive processes will lead to a better and more sustainable urban future, which benefits everyone.

To read about the various accounts of harassment faced by informal workers as reported by media over the past month, follow the links below: 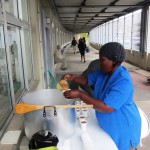 Serving in Warwick: An Altruist Initiative by Informal Traders
Scroll to top