You are here: Home / News / Uncategorized / Serving in Warwick: An Altruist Initiative by Informal Traders 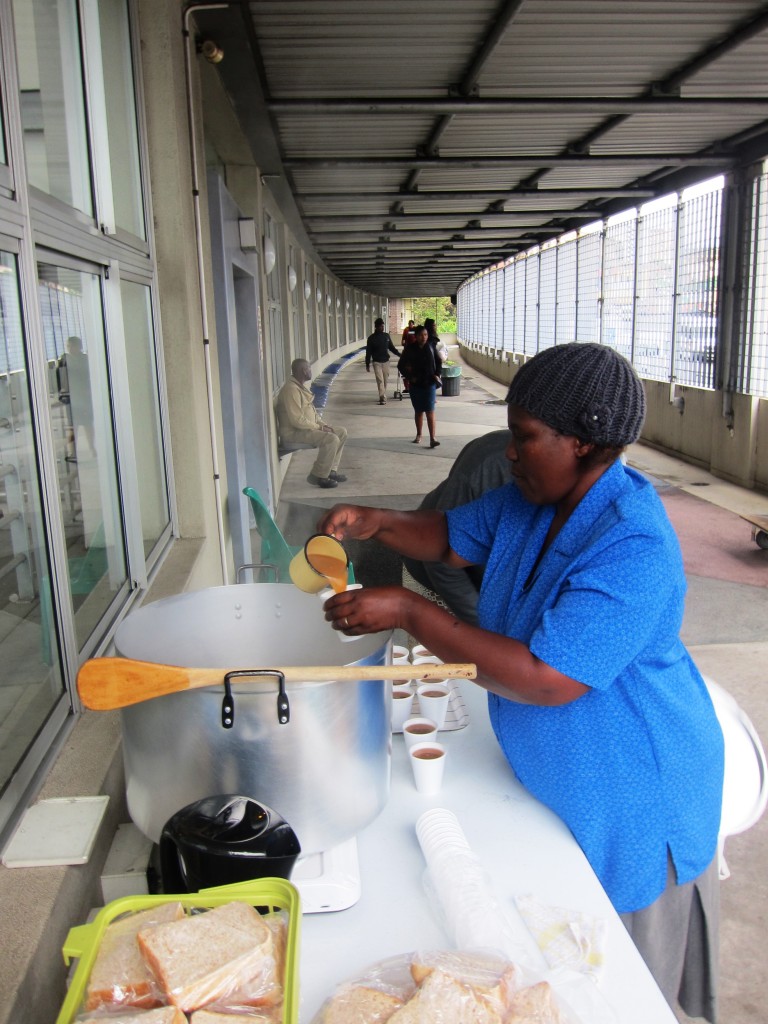 A member of the traders group pouring the prepared soup for the patients outside the Centre’s doors. Photo: Tasmi Quazi.

As an intern at Asiye eTafuleni (AeT), Kara was given the opportunity to engage with the women of “Senzokwethu”, a group of informal traders who run a soup kitchen every morning for the patients of the Centre for Communicable Diseases based in Warwick Junction. As an act of community service, they run this project entirely pro-bono every morning between 5.30 to 9.30 a.m. When they’re cooking, serving, or seeking donations for the soup kitchen, they sacrifice crucial trading time when they ought to be at their trading stalls.

The initiative began in 2006 and it has been maintained by a group of 6 women traders. On noticing a number of people collapsing on the streets from health-related issues, the traders discovered that most of them were heading to the Centre for their routine check-ups and to acquire medication. Most of the patients come from afar to the Centre, as early as 5.30 a.m., to join the long queues for their turn to be examined. Consequently, many are unable to eat the food necessary to minimize the side effects of the prescribed medication. The soup and bread served by the traders in the mornings has provided a vital meal for the nearly 350 patients they feed a day.

Members of the traders group after a round of serving patients at the Centre for Communicable Diseases. Photo: Tasmi Quazi.

The group of women traders have greater aspirations of opening a crèche and offering more food services in the area. However, they are currently limited by the lack of funds. They rely on donations to keep their work going, and considering they sacrifice valuable trading time to serve at the Centre, they cannot afford to invest more time or money. To attain their goals and make their service sustainable, AeT is supporting them with the application process to become a registered non-profit entity.

Members of the traders group that make up Senzokwethu with AeT staff. Photo: Zoe Horn.

Kara describes her personal reflections on working with the women:

A member of Senzokwethu carrying the cups of soup to patients in specific waiting areas. Photo: Tasmi Quazi.

“I’d worked in soup kitchens before – but nothing could have prepared me for the grace with which these women informal traders handled themselves in their limited facilities. They know their roles, have a routine and are extremely confident in their purpose in serving the community.

I shadowed the women as they entered the Centre and gathered their modest supplies from a back kitchen clearly intended for the Centre staff. I helped set up these supplies on a folding table on the porch outside the Centre doors. I sat with them as they started to boil a 50-litre pot of water on a portable stove. I watched as they mixed frozen vegetables in with the broth to offer some extra sustenance, and went with one of the women to a local grocery store to retrieve the 15 loaves of bread a donor buys for them every few days.

After serving the patients at the Centre, the women begin work at their respective trading stalls in Warwick. Photo: Tasmi Quazi.

As the patients arrived, I walked through the Centre with the women, serving styrofoam cups of hot soup and packages of sliced brown bread. I listened as the Centre staff told the women how “you make our hearts proud,” and to the patients as they murmured their grateful thanks.

Personally, these women have transformed my perceptions of the informal economy. The literature I had engaged reiterated the numerous challenges informal traders face, and I had begun to forget the more positive aspects of their lives. It was difficult to imagine that these traders would be able and willing to embody such immense altruism. Yet these women were an important reminder and a concrete example of the strong sense of community fostered by the informal traders in Warwick Junction.”

Three of the six members of the women trader group that make up Senzokwethu. Photo: Tasmi Quazi. 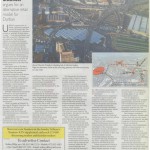 An alternate and inclusive retail model for Durban
Scroll to top