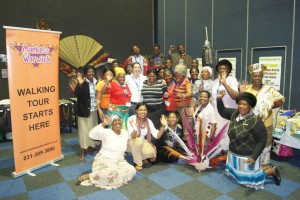 The group photo with representatives from AeT, Markets of Warwick Committee, MATO, SASEWA and the Imagine Durban Cardboard Recycling Project

The Cardboard Recycling Project stall was re-designed this year with playful graphics printed on cardboard banners to showcase an alternative use of cardboard itself and included the display of the family of custom-made trolleys.

The stall attracted much attention from other stall holders and the public who approached the AeT staff and Cardboard Recyclers with inquisitive enquiries and good comments about the Project. Not to mention, compliments for being one of the few stalls which used 100% recyclable material in its display. The Recyclers had again assisted with cleaning the custom-designed trolleys, the set-up, break-down and the management of the stalls, with a representative from both Project contexts of Palmer and Pine Street respectively.

What the Recyclers had to say

For AeT staff, it was satisfying to be able to step back this year on seeing the Recyclers articulating themselves with greater confidence and pride as they described to the public what their work entails and the Project’s activities. However it was best seen in the self-initiative and creativity taken to dress up for the occasion!

First time Project participants of the exhibition had this to say:
“Being a part of the exhibition was eye-opening, normally us Recyclers are chased out of events like this. Interacting and communicating with the wider public boosted my confidence and was a good learning experience…” (Nicholas Nhlangulela) 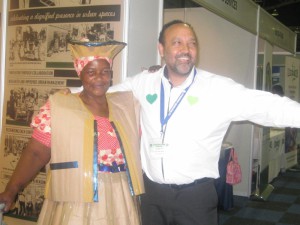 “It was good exposure and it showed the public that we are proud to be Recyclers and everyone should accept us and respect us for the work we are doing. As female recyclers, we are supporting our children, we buy food and educate them with this livelihood…I was very happy about AeT’s support in getting us to be at the exhibition and it has been very good to have a role model in our leader, Maria (Vilakazi) who coached me about what to say to the public…” (Gloria Majola) 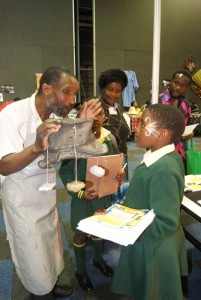 Recycler Afrika Ntuli, also commented about how they inspired the wider public to consider the important role of ‘informal’ recycling in enabling jobs and its contribution to recycling which mitigates dumping. Furthermore, he emphasised the need to do away with the negative perceptions related to ‘informal’ recycling, as he said:
“We were educating the public about the role of the Recyclers and sending a clear message that the Recyclers and the people must be proud of this job, and not be ashamed to be making a living out of it. I even exchanged numbers with a learner who phoned me a few days after the Exhibition to say thank you for speaking to him, because he has started collecting cardboard and paper in his neighbourhood and will start selling them to make some money for the home…”

Many of the participating recyclers also reported that they were able to establish new business contacts. Thinking ahead, Nicholas Nhlangulela suggested that the cardboard collection process should be captured as video footage and featured as a DVD at next year’s exhibition. 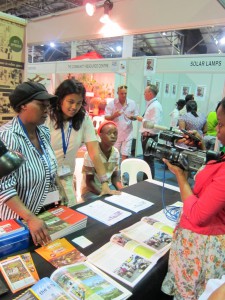 Recycler Maria Vilakazi providing an interview to a media official

The additional aspect to AeT’s involvement in this year’s Sustainable Exhibition was the facilitation and organising around the involvement of informal crafters and manufacturers of products. Aside from creating awareness about the sustainable livelihoods prevalent within the informal economy, this was considered an essential component of promoting social sustainability. The process of determining the participation of the informal traders was deliberative and consultative, like all things in AeT.

These informal traders primarily came from two organisations, Masibambisane Traders’ Organisation (MATO) and the South African Self-Employed Women’s Association (SASEWA). In order to capacitate these latter organisations with a greater presence, AeT offered their design services to collaboratively develop logos, banners and business cards. This involved co-developing a visual identity from scratch, by modelling various versions until the organisations felt that the final version represented their desires and values. 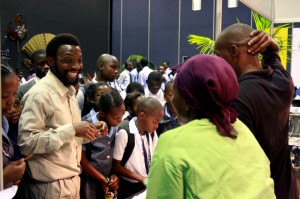 Recyclers on the right engaging a school teacher and learners

In addition to this, the Markets of Warwick Project participated in the exhibition as promoters of the walking tours which would be an opportunity for the general public to be exposed to the entire representation of the vibrant informal economy within the nine Markets of Warwick Junction.
Seeing the new addition of the traders’ stalls, Recycler Maria Vilakazi commented,
“I am very impressed at the way you (AeT) organised the informal traders to be a part of the exhibition, and also all the school children, it was well-organised and because of all this – this year’s exhibition was bigger and better…”