Recycling has a multitude of benefits; it protects the environment, saves the municipality money, and helps many people sustain their livelihoods. Let’s unpack this a little bit:

AeT is currently working on a project to quantify this impact, however it is estimated that over 500 informal recyclers operate in inner-city Durban and the surrounding areas. It is estimated that they salvage an average of 150 tonnes of cardboard every single day.

Despite all the above-mentioned positive elements of the work that they do, informal recyclers are too often harassed, exploited, and forced to work under harsh conditions to be able to put food on their tables. The COVID-19 pandemic, and the lockdowns which have taken place as a result, worsened conditions for informal recyclers; many shops began selling their recyclables directly to recycling companies, the closing of liquor outlets eliminated a large portion of recyclable materials, and residents’ attitudes towards informal recyclers became more hostile. The recent spate civil unrest in KwaZulu-Natal served another blow to this group of informal workers because the destruction of shops and restaurants resulted a disruption of their supply chains; many informal recyclers have developed casual working relationships with institutions within the inner-city, but as one informal recycler noted after the looting:“I will have to walk around CBD to get access to waste which I have never done before. If that does not work out, I will have to go back in the rural area and start gardening so that I can keep healthy.” This highlights the precarious nature of the work being done by informal recyclers.

Since 2010, Asiye eTafuleni (AeT) has collaborated with the municipality and a range of consultants on a project which aims to integrate and legitimize the work being done by these undervalued members of society. The outcome of this work is The Palmer Street Recycling Facility, which was officially opened in May of 2021 for the Friends of Recyclers, a cohort of women who have mobilised around this livelihood opportunity. The idea for the creation of this facility was borne out by research conducted as part of the Imagine Durban Inner-City Cardboard Recycling Project. Findings from this research indicated that the four main issues that informal recyclers were experiencing were as follows:

The Palmer Street Recycling Facility provides a “safe sidewalk” where recyclers can safely sort and store their recyclables before selling them to recycling companies. These women have also been provided with a uniform, ID cards, and in some cases, carts which were designed to be fit-for-purpose.

The biggest weigh-in at the Palmer Street Facility to date was 569 kilograms which, at a rate of R1.50 per kilogram, amounted to R853 for the recyclers who had salvaged the material. 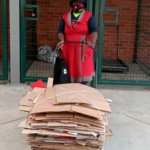 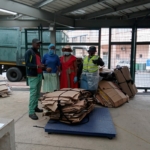 A fit-for-purpose cart loaded with salvaged cardboard and a recent weigh in with a middle agent at the Palmer Street Recycling Facility. Images supplied by the Friends of Recyclers.

AeT’s involvement in this project is ongoing, and we have identified a need to empower these women by facilitating and building relationships with the formal business sector which will result in an improved supply of recyclables as well as a better and direct collaboration with the commercial recyclers. 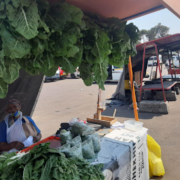 Informality and the Law: Narratives of informal workers in Warwick, Durban