Menu
You are here: Home / News / Education / The Markets of Warwick Tour features on the Saturday Independent “Markets are by definition, bustling places of enterprise…there are many markets within the Warwick Market complex, each with their own way of doing things.”

…writes Duncan Guy, as he describes his experience of the Markets of Warwick tour which appeared in an article in the “Arts and Pleasure” segment of the Independent on Saturday newspaper on 7 November 2015 on page 12, and on Independent Online. 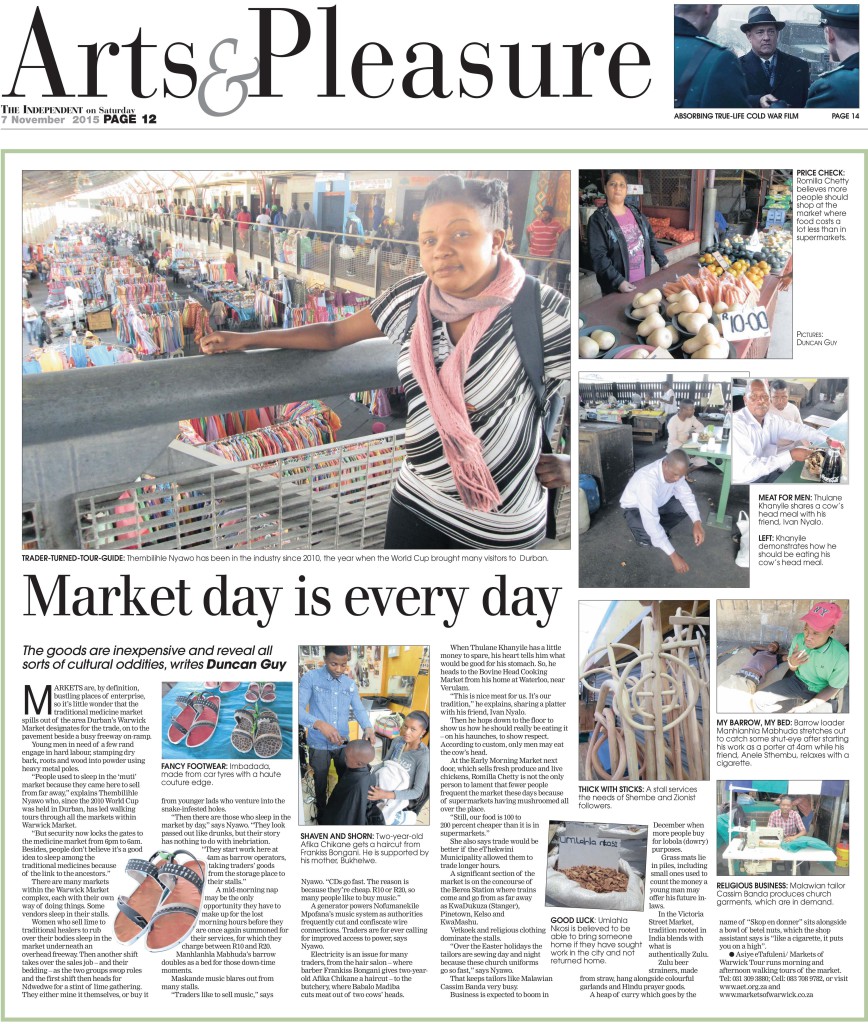 The Markets of Warwick tour in the Saturday Independent on 7 November 2015, page 12.

Led by Markets of Warwick Trader Tour Guide, Thembelihle Nyawo, Duncan takes readers along his experience of the Markets of Warwick as he describes in colourful detail, his insightful and candid observations about the various people, cultural products and produce. He brings some of the voices of Warwick’s informal workers (or traders) and their customers to life as he describes the dynamics on the streets, as well as some of the challenges faced by them.

…Electricity is an issue for many traders, from the hair salon – where Frankiss Bongani gives 2-year old Afrika Chikane a haircut – to the butchery, where Babalo Madiba cuts meat out of two cows’ heads.

When Thulani Khanyile has a little money to spare, his heart tells him what would be good for his stomach. So, he heads to the Bovine Head Cooking Market from his home at Waterloo, near Verulam.

‘This is very nice meat for us. It’s our tradition,’ he explains, sharing a platter with his friend, Ivan Nyalo…

At the Early Morning Market next door, which sells fresh produce and live chickens, Romilla Chetty is not the only person to lament that fewer people frequent the market these days because of supermarkets having mushroomed all over the place.

Read the rest of the fascinating account in the image attached or online. Duncan describes Warwick Junction’s hustle and bustle as “Market day is every day!” To experience it for yourself, call 031 309 3880 or email mowtours@aet.org.za. For more information on the tour, visit: http://www.marketsofwarwick.co.za/home