Kanyenathi meaning “with us” in isiZulu, is the Comic Relief funded project that is being implemented by Asiye eTafuleni across 3 years and 3 informal economy districts in Durban. It was kicked off in October 2014 with a series of community engagements (read more here). From March to July 2015 however, a major project activity – which was the training for and implementation of the Infrastructure Audit with informal workers – was completed. 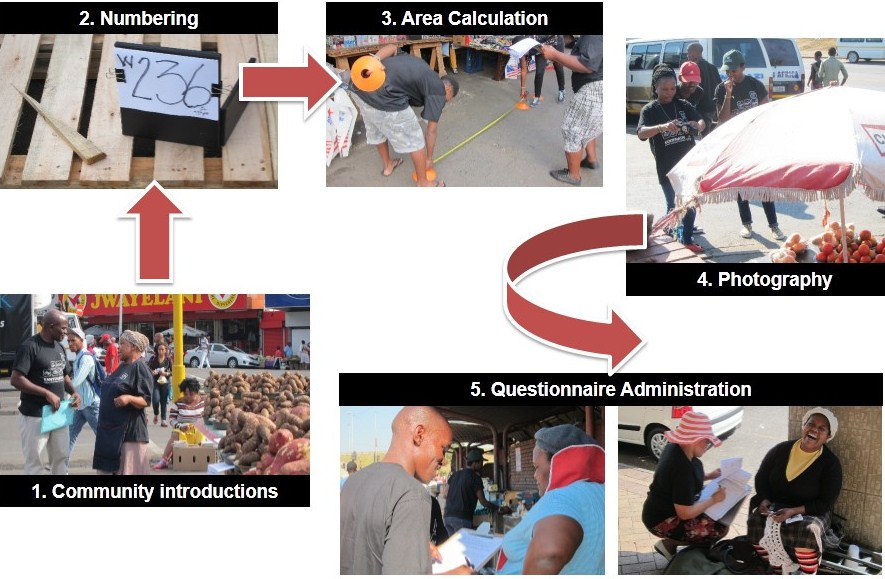 Some of the processes of the Infrastructure Audit. Photos: Tasmi Quazi & Chantal Froneman.

The audit was intended to identify the infrastructure and urban management challenges and needs of informal workers across the 3 districts and performed by trained informal workers, resulting in a report to be presented to relevant municipal officials. The data collection team comprised the following informal worker roles: 1) those that administered the questionnaire; 2) those that photographed workplaces and undertook area measurements of the surveyed informal workers; and 3) the zone leaders responsible for community liaison. In addition, university post-graduate students mentored the questionnaire team and the technical team (responsible for photography and measuring).

Survey questionnaire training inside and outside the classroom, including simulations. Photos: Richard Dobson and Tasmi Quazi.

The original make-up of the data collection teams to conduct the infrastructure audit was to be 20 informal workers matched with 20 university student assistants. AeT’s research into participatory development approaches and action research informed the decision to create an even more rigorous model. Subsequently, we opted to have more informal workers being trained to do the fieldwork and mentored by fewer students. In total, 97 traders received training, of which 40 conducted the audit of 1052 informal workers across the 3 districts, and supported by 13 student assistants.

Similarly, instead of relying entirely on an external party for the photo-documentation of the 3 districts as originally imagined, informal workers were trained to take photographs of the 1052 informal workers surveyed. The narratives below captures reflections from the data collection team on how the participatory action research phase of the Kanyenathi project has benefited them respectively.

Phumelele Mkhize (student assistant to the technical team during the Infrastructure Audit) reflected on the challenges within the urban environments of informal workers, as she said:

“As an architect in training, this project has been a positive eye-opener to see how people work on the streets and in being able to work with informal workers themselves on the project. I have been inspired by how receptive informal workers have been to the project. Through the research, I have come to realise the maladies of urban design and planning because there is such a disconnection between what traders are selling and the poor infrastructure they use or rely on to sell their goods and service. There is a severe lack of appropriate urban design which supports and enhances informal work.” 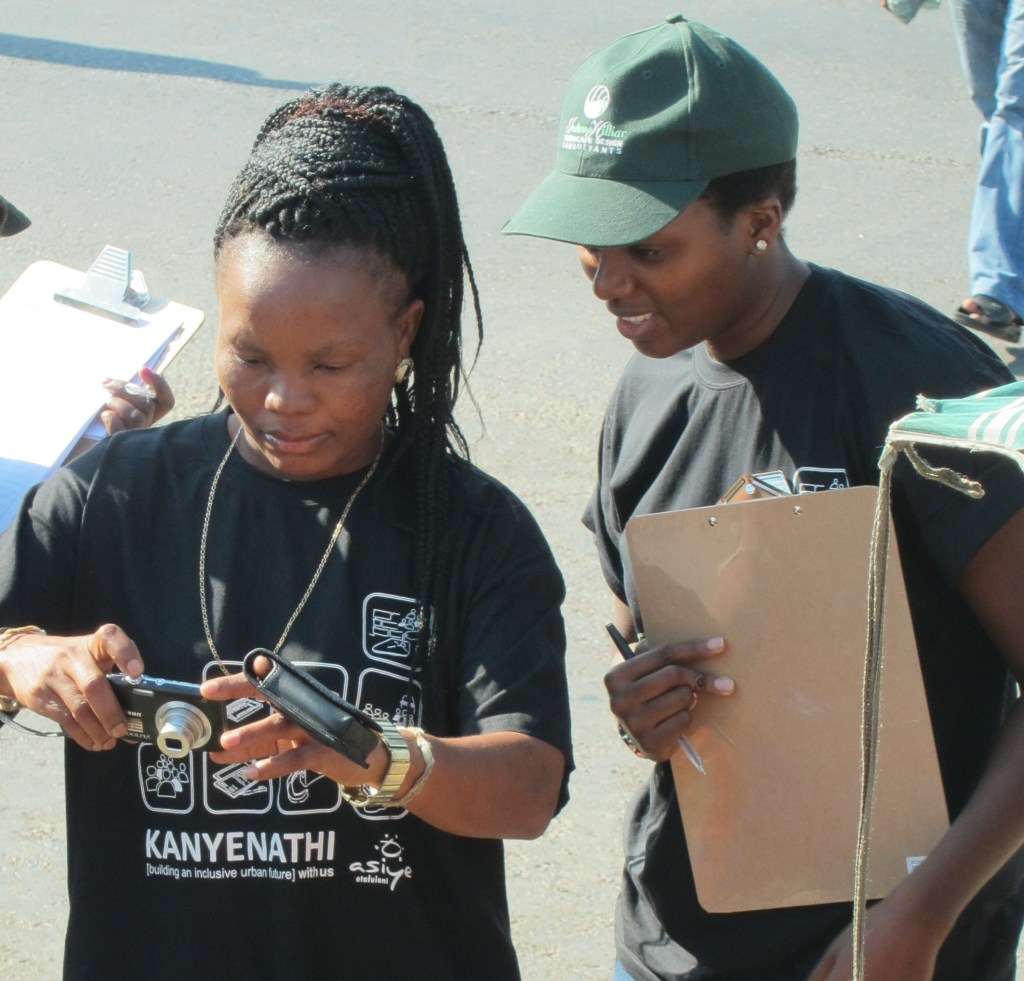 A number of the informal worker fieldworkers raised that the extent of the infrastructure challenges really surprised them as Sindisiwe Mkhize and Samukelisiwe Zuma (both of whom administered questionnaires) passionately reported:

“We were disgraced by the conditions faced by the Lime and Impepho sellers. They don’t have any facilities and their products get destroyed in the rain. What’s more is that they share their trading sites with other sellers – yet they pay the City rentals!” 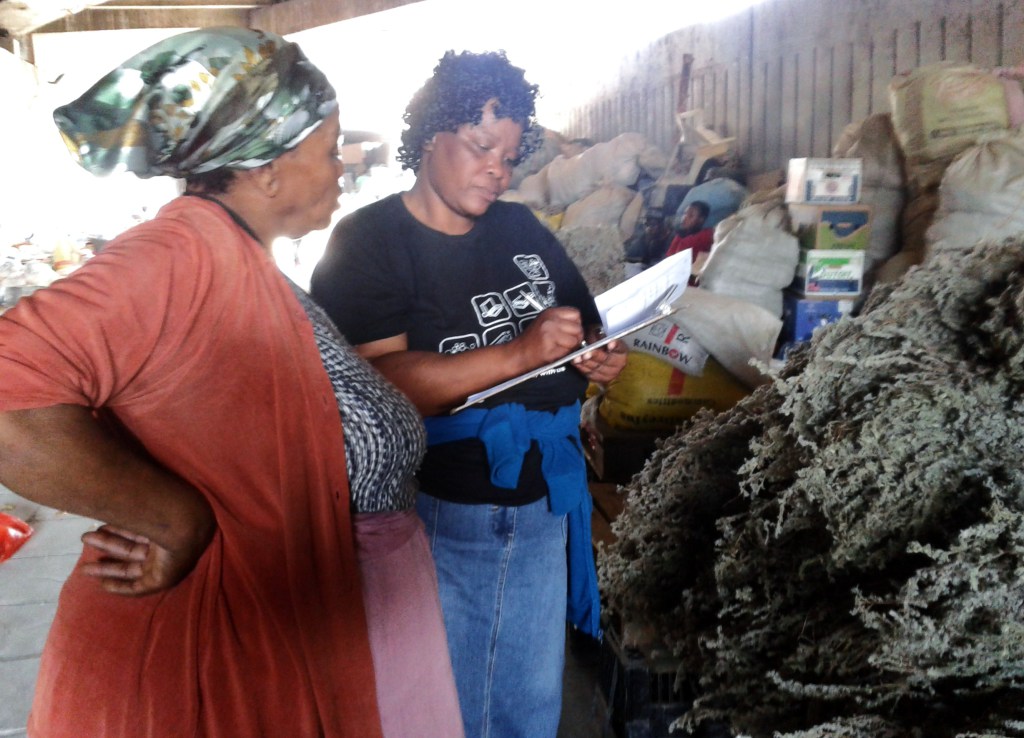 A number of the fieldworkers identified the need for storage facilities, public toilets and access to water as being major challenges plaguing most informal workers that they surveyed. On this, Lindiwe Zuma (Zone Leader during the Infrastructure Audit) commented:

“I didn’t realise just how bad the infrastructure challenges were in Warwick Junction compared to CBD. This is really eye-opening for me as a leader to know what’s happening in other market areas so that I can bring it up at meetings with traders and the City” 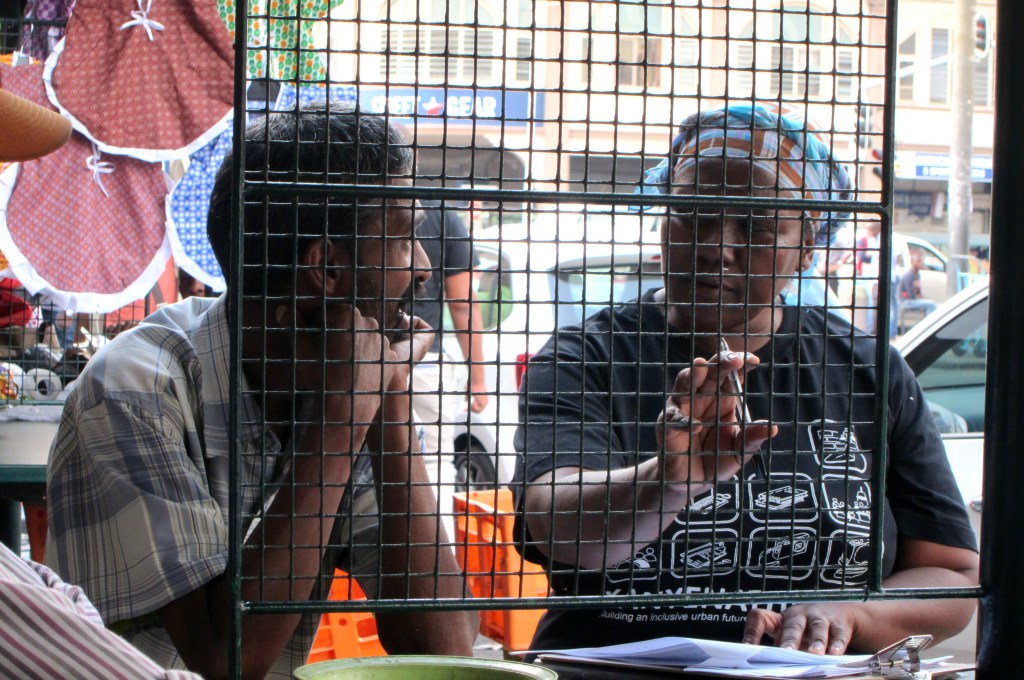 “After hearing about all the challenges with storage, toilets and water that the traders face – I thought to myself, the city calls these budget hearings we don’t really know whether they are budgeting for us informal workers because there is so much need”

Samukelisiwe Zuma commented that the informal worker-administered questionnaires helped the surveyed informal workers to vent their challenges more effectively than to outsiders conducting third-party surveys, as she said:

“The training we got helped us with the fieldwork, but it was only during the fieldwork that I realised just how necessary the research and the project is because informal workers struggle with a lot of challenges which they need to vent about. I believe it was easier to vent and tell other traders like us about these challenges than anyone else.” 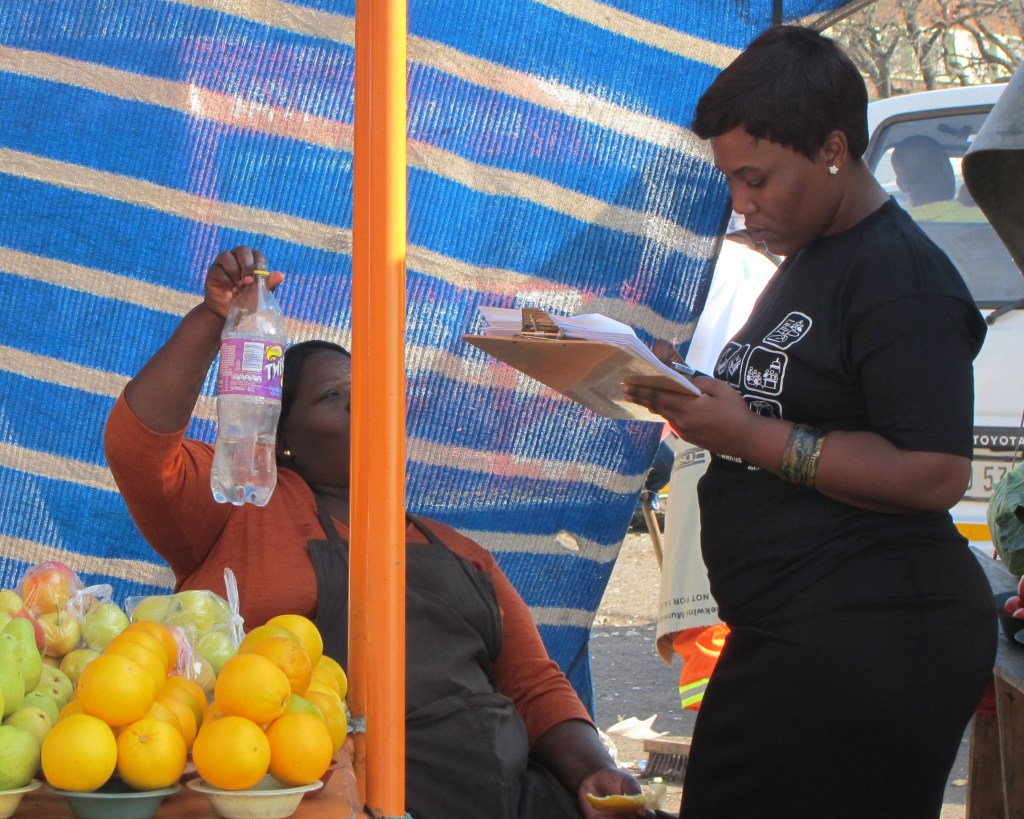 To this, another fieldworker, Lungile Chiya, added:

“The research made me realise that there is so much politics in the streets amongst informal traders with the leaders and city officials. They are finding it difficult to report any challenges and they don’t know who to turn to. Many traders said that the Business Support Unit that is meant to help them turns them away and so they just end up keeping quiet. This research is asking questions which many people have been ignoring”.

Patrick Mahlangu (Zone Leader during the Infrastructure Audit) commented that the project activities have brought informal workers together:

“It was incredible to see the large data collection team with so many different informal workers working so well together. I noticed that the informal worker-researchers asked questions and engaged with the traders respectfully which made my job as a leader easier. The traders that were surveyed were impressed. This is a purposeful project which has brought us together.” 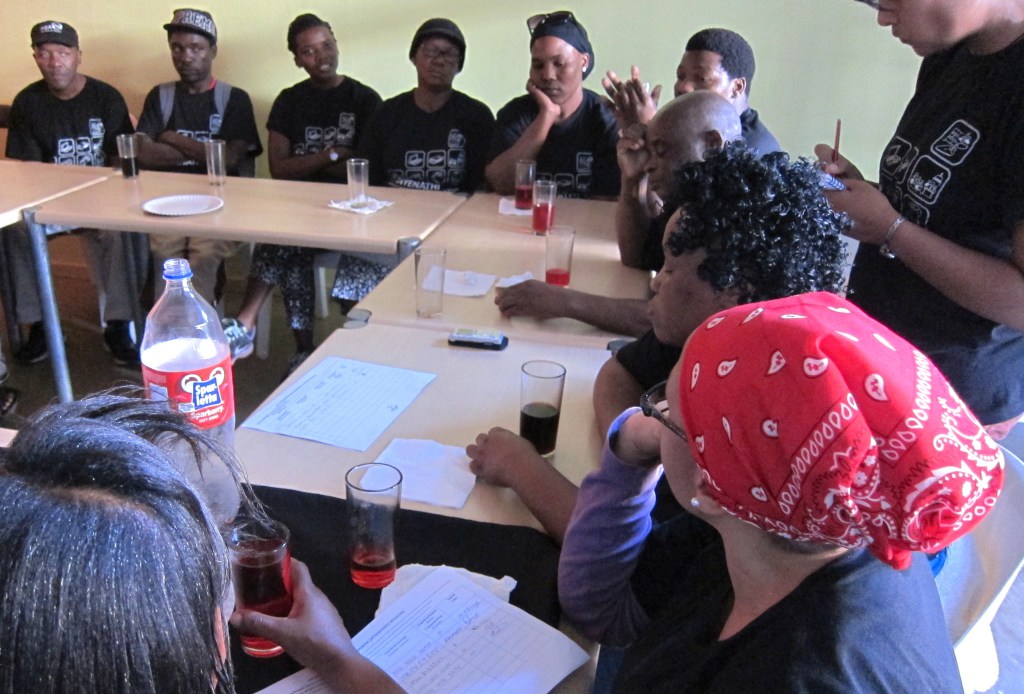 Data collection team reflecting on their experiences of the fieldwork. Photo: Richard Dobson.

On a similar note, Xolani Dlamini (responsible for taking photographs during the Infrastructure Audit) added,

“…I also learnt a lot about how to respectfully engage other people during the fieldwork and in working with the team. I realised so much about informal work that I had never thought about before, like how wrong it is that informal workers with small or inadequate workplace sites pay the same or more rental fees than others that are better off. In certain areas, the municipality does not thoroughly clean, but the traders need to take initiative and step in but they lack pride in their workplaces. We as informal workers need to work with each other more to tackle these challenges and this project has shown me that is possible.” 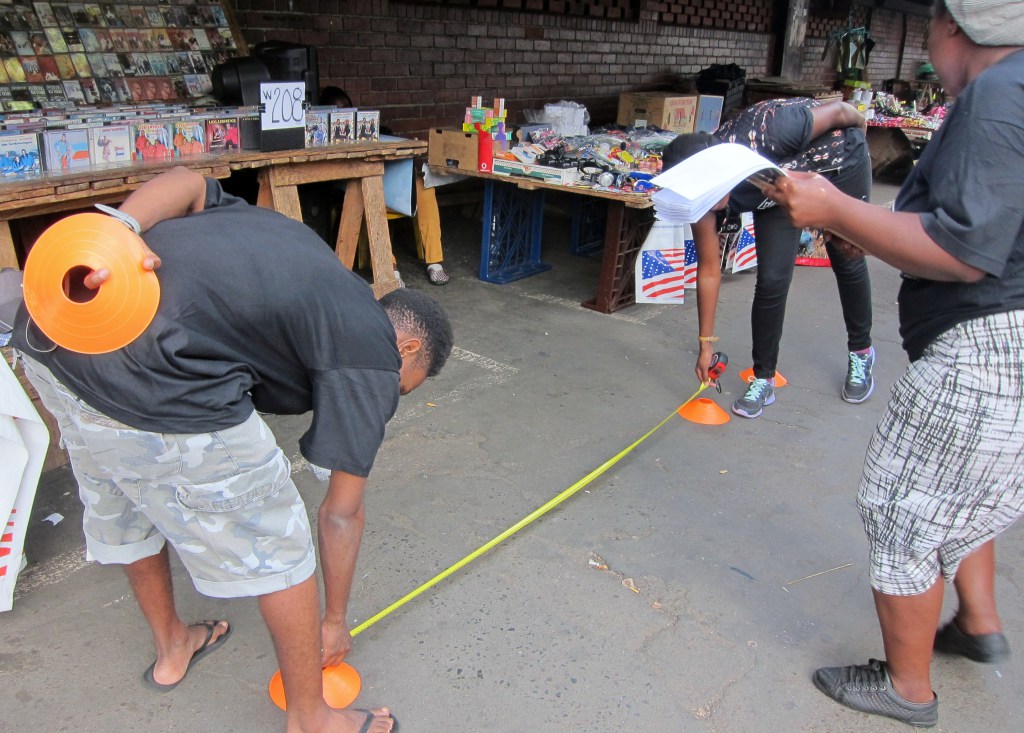 In conclusion, the comprehensiveness of the infrastructure audit with a participatory approach not only provided an enormous amount of useful data but also required greater levels of coordination effort. AeT has been encouraged by the level of competency and aptitude of the informal workers in their role as researchers and community representatives suggesting that the participatory method has long-term relevance and application. It also proved to be a new and powerful tool for informal workers to engage with their colleagues on the universal challenge of infrastructure and urban management needs.

The next article will provide a critical elaboration on the organisational experience of the Infrastructure Audit. 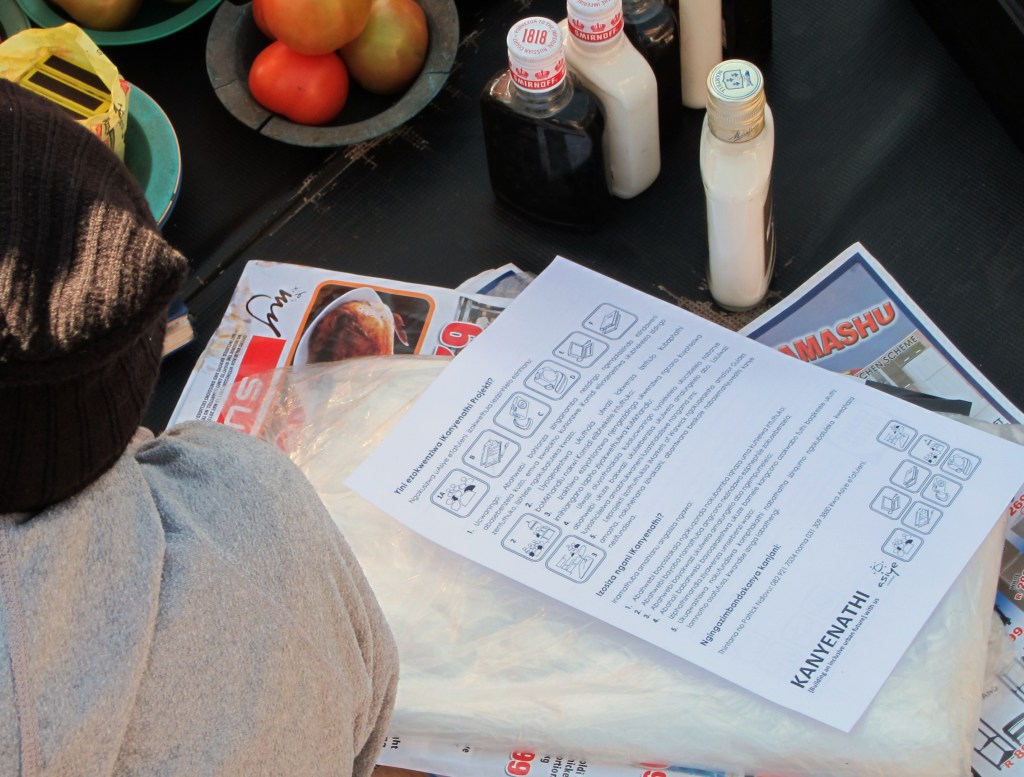