You are here: Home / News / Advocacy / The Markets of Warwick Tour: celebrating its growth in September Tourism... 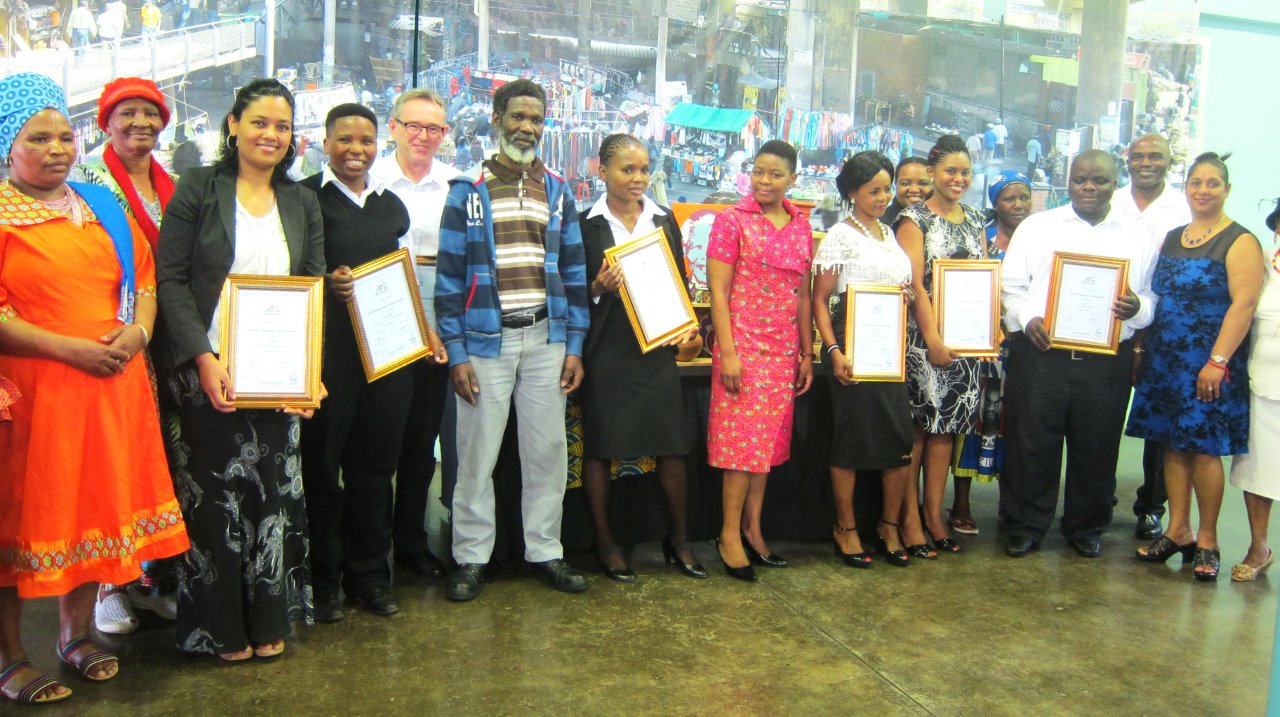 In South Africa, both heritage month and tourism month are celebrated annually in September. Within this timely context, the Markets of Warwick tour contributed to the celebration of both heritage and tourism by holding a graduation ceremony for its 8 newly trained tourist guides on 21 September 2016, to make up a total complement of 16 tourist guides since the project was initiated in 2010. The graduates publicly received their certificates as Cultural Site Guides of Warwick Junction and its vibrant informal market hubs. In addition, another major milestone for the project was announced, that 9000 visitors have experienced the tour thus far. The opportunity to train the additional tourist guides, thereby growing the Markets of Warwick tour project, was made possible by a 3-year funding programme supported by Comic Relief. The Graduation Ceremony at the iTRUMP Hall with entertainment from a local trader and a local dance group performing the cultural “Imfene” dance. Photo: Tasmi Quazi.

The graduation ceremony was held at eThekwini Municipality’s iTRUMP Hall adorned with cultural décor and entertained by pulsating performances from a local dance group to an audience of government officials from local and provincial departments such as the KwaZulu-Natal Departments of Economic Development, Tourism and Environmental Affairs (KZN DEDTEA), the Business Support Unit, inner-Thekwini Regeneration and Urban Management Programme (iTRUMP), representatives of the Durban Community Tourism Organisation (CTO), media, and Asiye eTafuleni (AeT) staff. Local leaders of the Warwick Junction trading community dressed in cultural attire and on their feet during the musical performances. Photo: Chantal Froneman.

Most significantly however, was the proud presence of the family members and friends of the graduates, and the community members involved in the community-based tour project, namely the Markets of Warwick Traders’ Committee and Traders Against Crime (TAC), some dressed in their finest cultural regalia. A guest speaker Nompumelelo Dlamini (left) from the provincial department (KZN DEDTEA) being thanked for speaking at the ceremony by Nonhlanhla Nyandeni (right), the Markets of Warwick Coordinator. Photo: Chantal Froneman.

It was notable though that the tourism authorities prioritised the event. The guest speakers from the KZN DEDTEA and Durban CTO emphasised the value of accredited training that the tourist guides underwent so that professional tourism standards are maintained. They also encouraged the new guides by pointing out the additional opportunities that come with the accreditation such as freelance tourist guiding at other cultural sites of Durban, and being able to operate travel agencies and tour operator companies. Nozipho (at centre), conducting a simulated tour at the Early Morning Market during the training session, being observed by Chris Wheeler (of Empower-Ed) and the rest of the trainees. Photo: Tasmi Quazi.

The new tourist guides, initially comprising 6 informal workers, were nominated by community leaders for their aptitude and willingness to sacrifice 2 weeks from their businesses to undergo the training. The rigorous training involving theory and practical experience, was focused on understanding the tourism industry and the specific skills of being a tourist guides, including first aid. Phiwokuhle shared her experience:

“…at the beginning I was feeling terrified about the training because it was scary standing in front of everyone and presenting. Over the days, I forgot my nerves and learnt good communication skills (…) Although we lost money being away from our businesses for two weeks, we gained a lot of knowledge…”

After the theoretical classwork, it was the practical assessments that determined whether the trainees were fit for the part. For the first language isiZulu and isiXhosa speakers, undergoing the training in English was no easy feat – although the 3 AeT participants in the course facilitated more deliberate and creative engagement with the training material to ensure understanding. On the challenge of learning and communicating in English, Nozipho shared her personal reflection:

“I realise that I need to get serious about myself and my future. When I am serious, when I concentrate, I can do things. With the training, the practical experience was easier than the reading and writing (…) as a self-employed trader, the training gave me an opportunity to do something different and learn different skills like how to communicate nicely and how to greet and smile at people like tourists, how to dress well and behave as a tourist guide…”

Zinhle humorously added to this by saying:

“…I learnt how to communicate with people and I actually gained more knowledge on Warwick Junction. It makes us traders proud at the Herb Market when the “uMlungu” (white people) come to see and learn from what we do.”

Velaphi – who was previously involved in the Markets of Warwick tours as a Traders Against Crime marshal and now a tourist guide – energetically concurred, adding that they now have more knowledge about Warwick Junction as a tourism asset which they can impart to the other traders. Phiwokuhle (centre left), conducting a simulated tour at the Berea Station Market during the training session, being observed by Chris Wheeler and the rest of the trainees. Photo: Tasmi Quazi.

Another aspect of growth for the Markets of Warwick tour project is the high demand for academic tours, requiring that AeT train additional staff members in order to offer specialised tours that are frequently requested by university students and professionals in response to their curriculum interests. These include a broad range of topics such as “leadership in turbulent environments”, “the role of Warwick in the transformation of Durban”, “local economic development”, and “designing with informal workers” to name some. The tourist guide trainees undergoing First Aid Training. In the centre is Velaphi Ndlovu, previously a Traders Against Crime marshal, and now a tourist guide for the Markets of Warwick Tour. Photo: Tasmi Quazi.

The graduation ceremony was therefore a festive occasion for AeT and the community of Warwick Junction in celebrating the growth of the Markets of Warwick tour as a cultural and educational tourism product, and sharing these milestones with important tourism authorities, and now the world.

An inclusive and participatory design process for the Bovine Cooks Facility:... 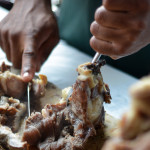 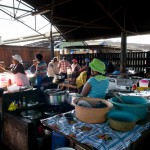 An inclusive and participatory design process for the Bovine Cooks Facility:...
Scroll to top