Menu
You are here: Home / News / Uncategorized / The view from the streets 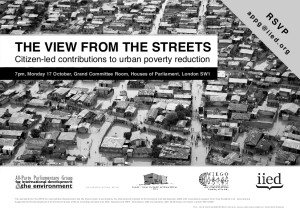 On Monday 17 October 2011, the All-Party Parliamentary Groups (APPGs) for International Development and the Environment forum held a meeting titled ‘The view from the streets: Citizen-led contributions to urban poverty reduction’. Amongst the line-up of speakers at the meeting, will be our very own Project Leader, Richard Dobson representing Women in the Informal Economy: Globalising and Organising (WIEGO) and Asiye eTafuleni; including Bijal Bhatt from the Mahila Housing SEWA (Self-Employed Women’s Association of India) Trust, Diana Mitlin from the International Institute for Environment & Development and Jockin Arphutham from Shack/Slum Dwellers International.

Attending the event were members of parliament from all political parties, members of the UK second chamber the House of Lords, parliamentary staff, civil servants, representatives of NGOs and civil society organisations, academics etc. Attendees will be a mix of specialists and non-specialists. The meeting took place in the Grand Committee Room within the Houses of Parliament in Westminster. This is one of the largest and, as its name suggests, most prestigious meeting rooms in the Palace of Westminster.