Menu
You are here: Home / News / Occupational Health & Safety / Pephanathi Project / Reflecting on 2016 and Beyond: Part 2 of 2 This article is the second part of a reflection piece of our work in 2016 and after much deliberation, we selected 16 major events or projects to highlight, much of which is continuing into the present year. Part 1 covered organisation milestones such as new funding support, project achievements particularly those breaking new ground in constructive engagement and collaboration between informal workers and city officials, and sadly, the loss of key figures in the community. The list continues below:

AeT’s Research Officer went on maternity leave mid-year of 2016. This was a first for the organisation, but the experience proved that organisationally, women staff can be accommodated and family responsibilities are supported.  Whilst a cause for celebration for the growing, extended AeT family, the organisation continued to be functional during her leave because the temporary resource gap was filled through AeT’s internship programme to be elaborated below. 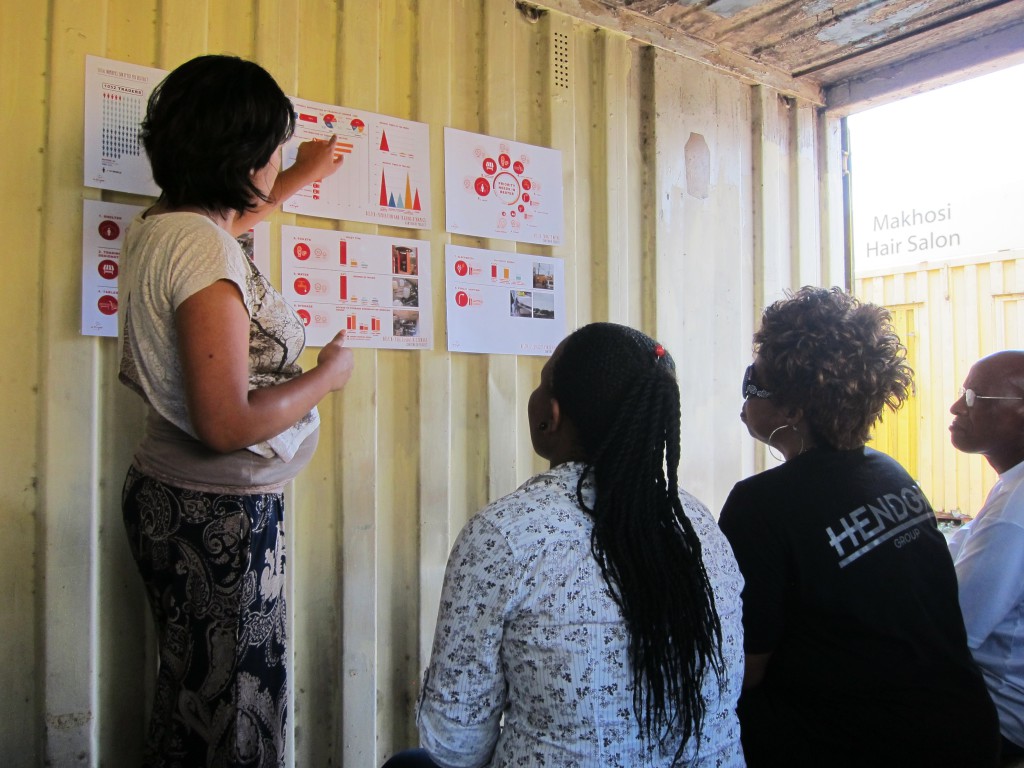 AeT Research Officer, Tasmi Quazi, facilitating presentation of the Kanyenathi research at Bester during the early stages of her pregnancy. Photo: Phumelele Mkhize.

AeT has hosted a number of highly skilled and passionate students and professionals that have volunteered their time and skills for fixed periods and assigned to specific projects of interest. To name some, Dorothee Huber, an Architecture Candidate was instrumental in helping AeT developing a response to the Amplify Challenge which was selected as top 10 entries, as well as innovative info graphics for the Kanyenathi research findings. The multi-talented Annalise Mathers, a master’s student in Public Health, contributed a number of insightful articles for our website, helped establish our social media presence, consolidated AeT’s Occupational Health and Safety programme as well as grant writing. Most recently, Victoria Okoye (WIEGO Urban Planner/Researcher) has come on board to collaborate with us on a public lavatories project. AeT is steadily becoming a portal for students and professionals seeking work experience in the development realm of the informal economy. 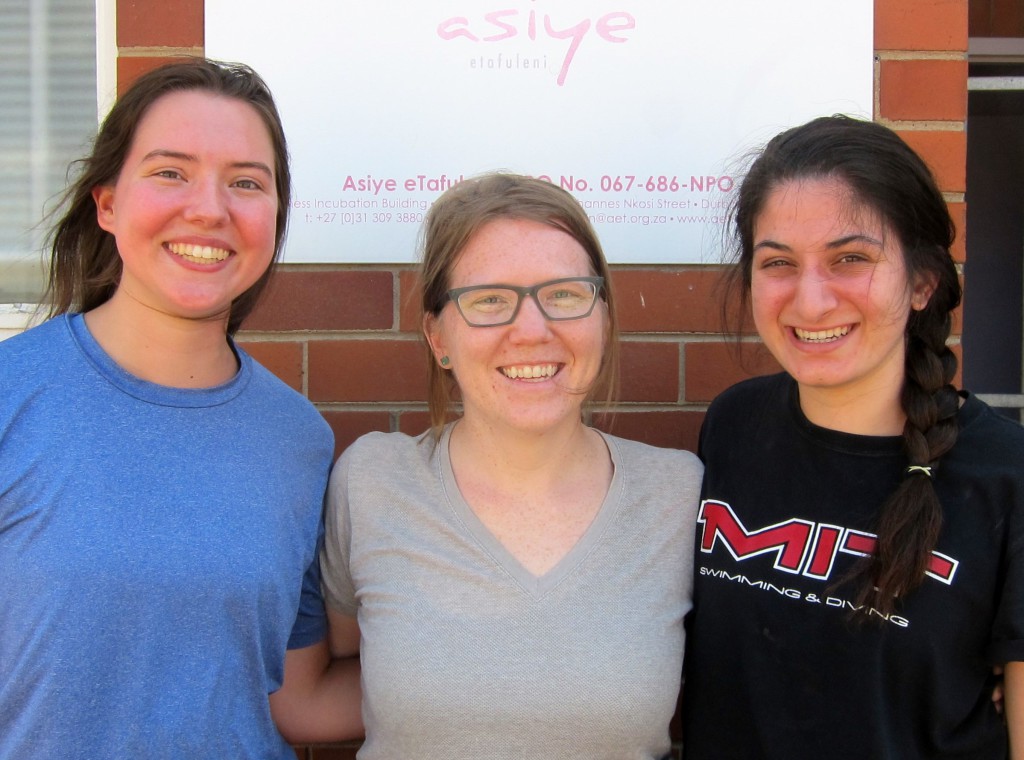 Currently, students from the Massachusetts Institute of Technology (from left to right) Emma Castaños, Kate Mytty and Teresa de Figueiredo, are interning with AeT, working on a research project exploring the real estate value of informal markets and on a public lavatories project. Photo: Phumelele Mkhize.

2016 saw the introduction of three new research projects within the OHS Programme. Firstly, the Hearing Conservation Programme which was initiated after AeT sought out local health practitioners to offer hearing tests to informal workers that face hearing challenges. Professor Mershen Pillay from University of KwaZulu-Natal’s School of Speech-Language Pathology, passionate about community-based work, stepped forward with a more substantial offering in mind. Together with AeT staff members, OHS Practitioner Warren Manning, and Laura Alfers from WIEGO’s Social Protection Programme, a hearing conservation programme was initiated. The project sparked a unique initiative as probably the world’s first, fully operational hearing clinic on-site at an informal economy hub to deliver a full hearing care service.  It was complete with an ENT and Audiologist and later joined by a lecturer and students from the University of Alabama. As a result, nearly 70 informal workers underwent hearing assessment and follow-on treatment for special cases are currently underway.

The other two research projects include a Medical Research Council funded study looking at the Environmental and Occupational Health Hazards of Traditional Medicine Trade, and a World Health Organisation research into breast feeding as it impacts women traders in urban spaces implemented in partnership with the University of KwaZulu-Natal Centre for Rural Health and WIEGO’s Social Protection Programme.

14. Exploring the intersect between the informal economy & informal settlements

In 2016, partners from the WIEGO network including AeT, Shack/Slum Dwellers International (SDI) and Avina participated in a learning exchange between Bogota and Durban, sponsored by the Cities Alliance. The exchange primarily involved informal workers and informal dwellers from Latin America and South Africa, aimed to create an opportunity for the organizations to share experiences with mobilization strategies, advocacy efforts and strategies, and creating partnerships. In Durban, AeT took the delegation on a walk-about through Warwick Junction and delivered an in-depth presentation on its work as well as the intersects in the development experiences of the informal economy and informal settlements. The grounded contributions of informal workers and dwellers provided deeper learning and solidarity amongst the participating organisations. 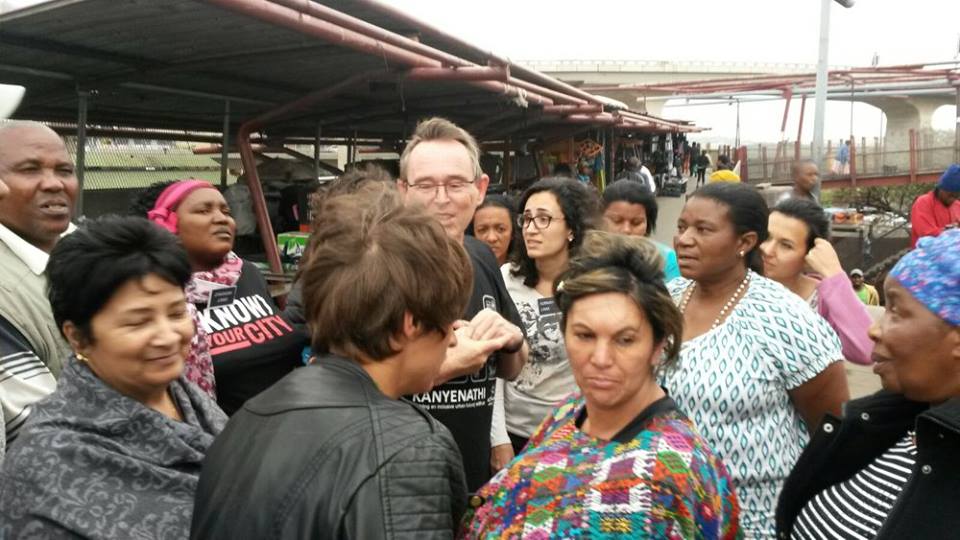 The AeT/SASDI/Avina delegation during the site visit at Warwick Junction. Photo: Yolande Hendler. 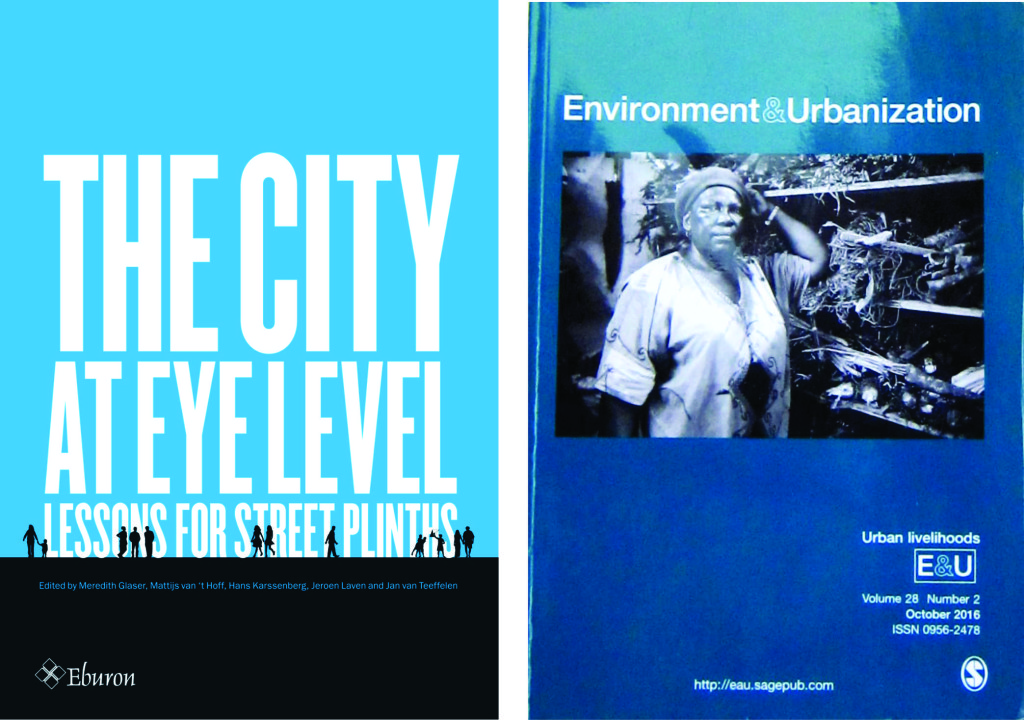 Pictured on the cover of Environment & Urbanisation Journal is the late Traditional Healer and Trader Leader, MaDlamini of Warwick Junction at her stall. 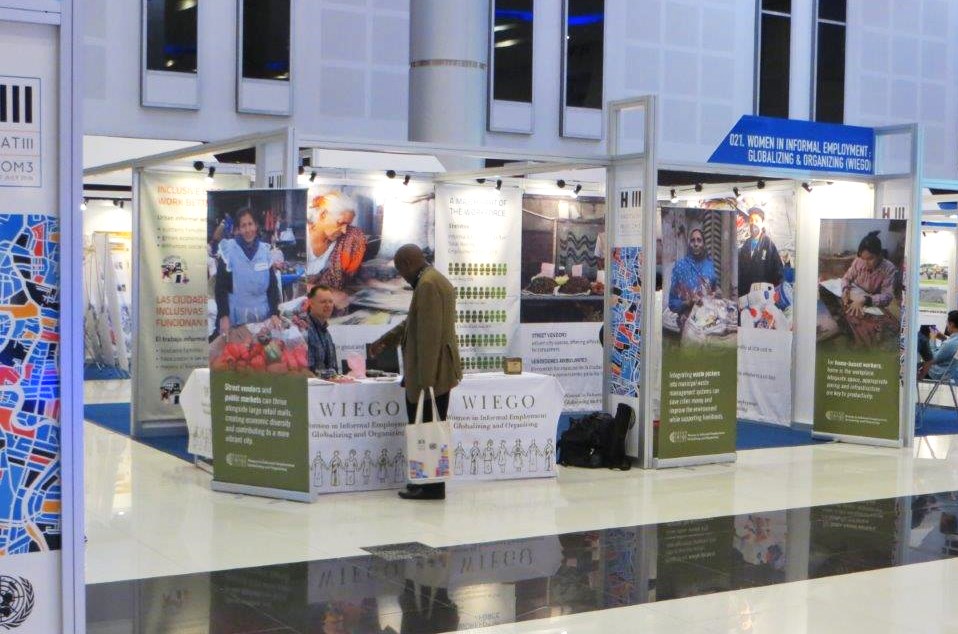 AeT participated as a WIEGO partner at the UN-Habitat III Prepcom 3. Pictured above is WIEGO’s interactive stall at the event. Photo: WIEGO.

In conclusion, the organisation has continued to mature its work streams at the micro level (e.g. through new participatory methods in research and design resulting in constructive engagement between city officials and informal workers; Law Project etc.) to participation in initiatives with wider impact at the macro level, such as in national, regional and international think-tanks and events and planning initiatives.

Organisationally, AeT has maintained its team size and focus on the urban inclusion of informal workers, although the volume of work has increased. The latter has been managed through an internship programme which has grown substantially. Furthermore, deliberate partnerships with local and international networks, and local government officials has enabled AeT to implement the additional work. Lastly, within the highly competitive funding environment, there is continual scrutiny of the organisation and being recognised by key and diverse donor bodies (e.g. Ford Foundation, OSF-SA, Comic Relief) is affirmation of AeT’s continued relevance.