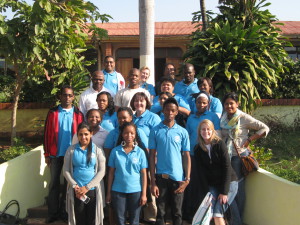 For this year’s ‘67-minutes of Service’ for Mandela Day, Asiye eTafuleni (AeT) in collaboration with the International Centre for Eye care Education (ICEE) and the eThekwini Health District ran a “Sinelungelo Lokubona” campaign (meaning “We have a Right to Sight” in isiZulu) on the 3rd of August. On this day, almost 200 street traders from Isipingo tested their eye sight for free, which included the opportunity to get tested for diabetes, hypertension and HIV. Those with near eye sight problems were given reading glasses, with up to 78 reading glasses being dispensed, while more complicated cases were referred to relevant hospitals.

Last year’s ‘67-minutes of Service’ coincided with the World Sight Day and escalated into a 5 hour event where 411 street traders from the Warwick Junction community received eye tests, and 250 of whom were equipped with reading glasses. However, this year’s event was remarkably unique for a number of reasons. 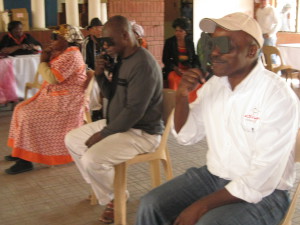 Firstly, we operated from an area in which AeT is not established. However, there was still immense receptivity from informal traders keen to get their eyes tested. Secondly, excessive police enforcement of the street traders operating in Isipingo definitely affected the attendance levels. During the community call sessions by the AeT team, many traders expressed that they could only attend after the threat of the police presence diminished, in fear of the possible confiscation of their goods. It was thus apparent that there are antagonistic and degraded relations between the police officials and traders in the area.

Beyond this volatile dynamic, this year’s “Right to Sight” campaign was a much more substantial service than last year due to the additional health tests attached to the eye tests. This was evident in the 7 hours of services rendered to a steady stream of traders coming in, even after we packed up; and in the feedback from some of the traders as captured below:

Street trader, Mrs Phindile Ngwenya has been trading at Isipingo for almost 10 years. She runs a public phones stall and also sells chips, sweets and biscuits. She had this to say:
“I am so happy that you are here to check up on us. The event went very well. It ran quickly and smoothly. When I arrived there, I was shown where to go, I registered, got my sugar level and blood pressure tested. After doing the eye tests, I was given reading glasses and when I put them on, I was able to immediately see clearly….We need such services in this area…The biggest problem here is that we don’t have access to such services, there is no public clinic nearby and as street traders we are suffering. We need to have these services available to us. Other workers in formal employment have access to these service and we are just ignored!” 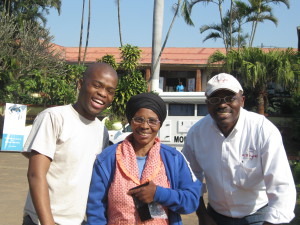 Informal Trader equipped with reading glasses after the eye-tests

She added that if this service is done in future, it would help the traders to get invitations earlier so that they can plan accordingly in terms of leaving the business for the duration and spreading the word to other people in their communities.

Street traders and married couple, Mrs Sophie Zungu and Mr Patric Zungu, work together from a stall selling grass mats, baskets and household goods. Mrs Zungu commented:
“I am so grateful for the service that you gave to us. We really needed it. I have had eye sight problems for a long time, but I never had an opportunity to have them tested. When I went for tests on the day, I was referred to Wentworth Hospital. The service I received at the hospital after I showed them the referral letter was very good. They did some tests and asked that I come back for results and more tests…I am very happy that I was able to do the test, if I had waited much longer maybe I would have been blind…”
Mr Zungu, also a Traders Committee Leader, had this to say:
“…I am very happy with the service that we received. Since I left formal work about 7 years ago, I have never visited a doctor and have tests done. I am now 63 years old and I have been feeling very tired lately and I could not do some of the work. Doing tests on the day couldn’t have come at a better time. It was found that my sugar and blood pressure levels were very high and was referred to Prince Mshiyeni Hospital. I went there the next day…I am so grateful that I went for these tests as the doctor told me that, had I left this condition longer, I would have suffered from a stroke! So every day I am taking my medication, I feel much better, and I am not as tired as I had always been…We definitely need these services in this area. Just few months ago, one of the street traders, an elderly woman, fell down and died right in front of eyes and there was nothing we could do for her. I suspect that she also had high blood pressure or sugar levels.”
This reflects a clear need for health services by the street trading community, who often lack both time and money to care for their vision, let alone their health.
https://aet.org.za/wp-content/uploads/2014/02/logo22.jpg 0 0 AET https://aet.org.za/wp-content/uploads/2014/02/logo22.jpg AET2011-08-16 11:11:442011-08-16 11:11:4467-Minutes of Service for Mandela Day - 2011

The Travels of the ‘Working in Warwick’ Exhibition
0 replies