Menu
You are here: Home / News / Uncategorized / Design with the other 90%

Warwick Junction, under the rubric ‘iTRUMP’ (Inner Thekwini Regeneration & Urban Management Program) is being exhibited at the Smithsonian’s CooperHewitt, National DesignMuseum, as part of its project called ‘Design with the other 90%: CITIES’. 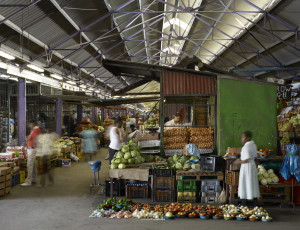 The  idea of  ‘Design for the Other 90%’ exhibition, developed in 2007, is an ongoing series that focuses on design solutions that address the 90 percent of the world’s population that are not traditionally serviced by the professional design community. Read here for more about Cooper-Hewitt and ‘Design with the other 90%: CITIES’.

However, this is their ﬁrst off-site exhibition due to Copper Hewitt’s renovations and will be held at the United Nation’s Visitor Centre in New York between 15th October 2011 and 9th January 2012.

Click here to read the press release which features an image of the Early Morning Market by Dennis Gilbert, from the book ‘Working in Warwick’.

Asiye eTafuleni’s participation is ongoing as the detail design of the exhibition progresses, so we will keep you posted with additional information as it becomes available.