AeTs childcare project which has been in the pipeline for the past 3 years (details available in the previous blogpost ) was unfortunately put on hold due to the COVID-19 induced nationwide lockdown which came into effect in March 2020. This was just weeks before the first childcare facility designed specifically to cater to the needs of informally working women in Warwick Junction was due to open. However, the project is getting back on track once again.

The ‘Silindokuhle’ pop-up micro-childcare facility is a unique space which was designed to suit the informal work environment which characterises Warwick Junction. ‘Silindokuhle’ is an isiZulu words which means ‘we hope for the best’. The primary intention of the childcare facility is to provide a ‘safer space’ for the children of Warwick Junction’s informally working mothers or caregivers, in close proximity to their place of work. The first 1000 days of a child’s life are instrumental with regard to their development, and adequate childcare options are often inaccessible and/or unaffordable to informal workers, which is why this project is so important.

A pilot demonstration took place on the 12th March 2020. In response to the feedback received from the mothers, as well the impacts of the pandemic, AeT has had to reconsider some aspects of the childcare facility. When the facility opens it will adhere to the regulations that have been put in place to prevent the spread of the coronavirus. In keeping with the on-going evaluation of the pilot, consideration is also going to be given to modifications to the installation to make the assembly/disassembly as effortless as possible. The organization is also in the process of modifying the design of the facility in order to make the assembling/disassembling process as seamless as possible.

At the time of the previous blog-post, the intention was to utilize a peer-to-peer/time-bank model for the operation of the childcare facilities. Through numerous discussions with the mothers who are going to be the beneficiaries of the pilot facility, it was decided that this model was not optimal and two of the mothers offered to take on the roles of caring for the children full-time, at an affordable daily fee paid by each of the other mothers. Staying true to the participatory approach employed by AeT in all of its projects, the mothers were involved in every step of the decision-making process regarding the operating of the facility.

Although only two of the mothers will be in charge of the facility when it is up and running, 7 out of the group of 11 opted to complete a caregiver training course through EduBabe. This training took place over 4 half-days and covered a comprehensive range of topics related to caring for babies and young children, including CPR and toy-making. The verbal exam took place on the in March.  All 7 mothers passed the course and there was enormous excitement when they received their certificates.

Over the past few weeks, we have consulted with the informally working mothers with regard to the re-opening of the facility. Currently, their financial situation is dire, due to the severe impact of the lockdown on their businesses. Many of the mothers are still trying to recover and pay off their debts, in addition to providing for their families. Pre-lockdown, affordable, accessible childcare options for informally working mothers were hard to come by. During lockdown childcare facilities were forced to close and many mothers would have been unable to afford the fees anyway, due to the decimation of their income. This has left them with very difficult decisions to make regarding the care of their children. Some of mothers sent their children back to their rural homesteads, some left their young children in the care of their older children, or other family members. Others bring children to work with them. All of them expressed a desire for the ‘Silindokuhle’ childcare facility to open in the new year.

The AeT team is aiming to facilitate the opening of the facility early next year. The intention is for the pilot project to catalyse the opening of numerous micro-scale facilities throughout Warwick Junction, in order to service the mothers and children in all the different trading areas. Although context is vital with regard to any design intervention, the hope is that the principles employed in this project can be adapted to suit informal work environments across the world so that the children of informally working mothers can have the best possible start to life. 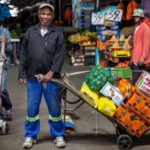 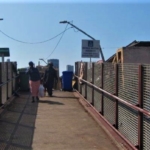 Impact of the pandemic on informal workers in Durban: Stories from the stre...
Scroll to top